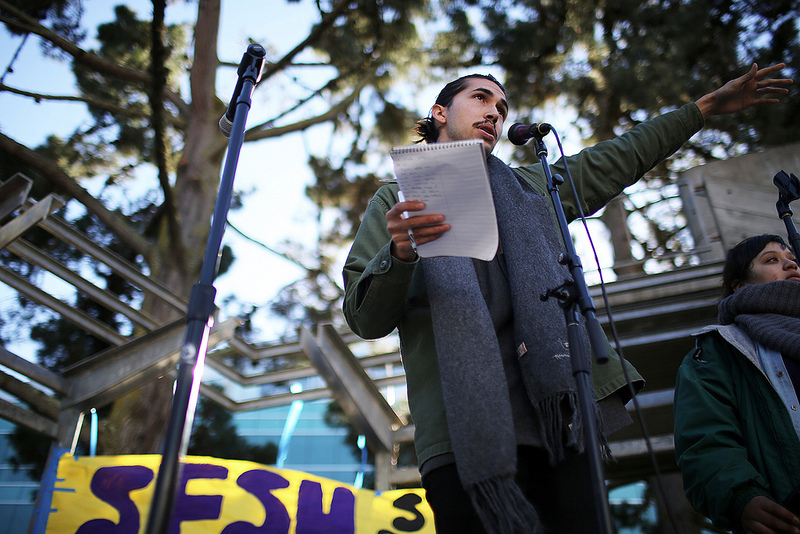 Michael Sanchez speaks to students about Tasers in Malcolm X Plaza during a rally Dec. 5. The rally was organized by a group of student organizations. Photo by John Ornelas / Xpress.

A group of student organizations held a “State of Emergency” rally Thursday in Malcolm X Plaza. The students said they wanted to raise awareness of different proposed administrative decisions on campus.

More than 40 people were at the plaza where the organizations addressed the proposed use of Tasers by campus police, the student center custodial workers’ rights and defended student rights of free speech.

Malcolm X Plaza was originally reserved for La Raza’s Migrant Day event. Instead, the student organizations involved used the allotted time and space as a platform for the rally.

Rafael Moreno, a member of Student Kouncil of Intertribal Nations (SKINS), said the timeliness of the issues and the academic calendar is why the organizations called the emergency rally.

“We felt we need to address these issues now before we go on winter break because if we wait, after winter break the momentum would be lost,” Moreno said.  The main concern, he said, is that the University will make decisions during the winter break when no students are on campus.

President Leslie E. Wong told Xpress after the last protest, that he does not make decisions while students and faculty are away.

Political and cultural messages were written in chalk on the plaza.  A banner reading “My heroes have always killed colonizers” hung at the entrance of the plaza.  President Wong recently condemned the message in a public statement after it appeared at GUPS’ mural celebration and non-student pro-Israel organizations deemed it anti-Semitic.

GUPS released a statement saying the message referred to all indigenous peoples and that the anti-Semitic accusation is a smear campaign by non-student Zionist groups.

Wong also responded to the initial accusations and said that hate of any kind has no place at SF State and he would investigate the situation. He did however also support students’ rights of free speech.

“Certainly this is a serious matter, it is also a teachable moment and our responsibility is to hear others clearly and accurately. We have an environment here where we support student inquiry and student activism,” Wong said.

Student center custodians also spoke to students at the rally expressing their concern over their job security and pension, previously reported by the Xpress.

“I think the University is doing exactly what they’re doing, but they don’t care,” said MEChA member Patricia Martinez.  She said that University officials lack empathy for students and workers.