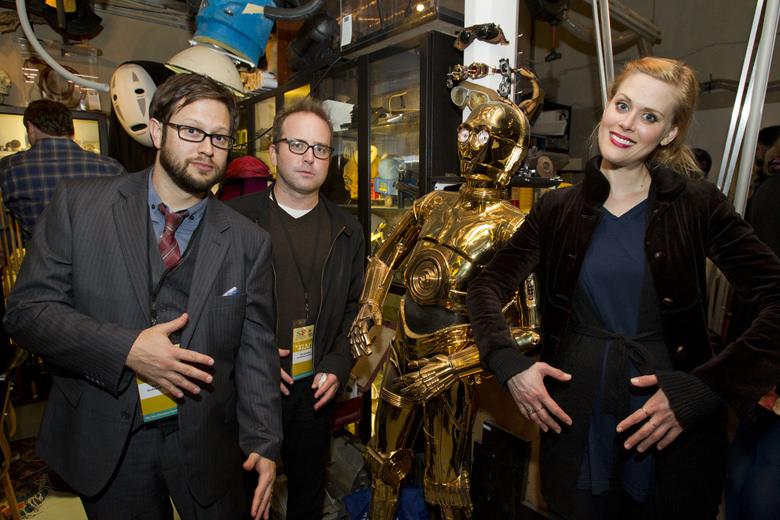 Cole Stratton, David Owen, and Janet Varney pose with C-3PO at a party at Adam Savage’s studio after the performance of Night of the Shorts IV: Riffizens on Patrol at the Castro Theatre in San Francisco Jan. 24, 2014. Photo by Jakub Mosur / Special to Xpress

What started as an outlet for recent graduates to perform is now one of the biggest annual festivals San Francisco has to offer.

Every year SF Sketchfest, also known as the The San Francisco Comedy Festival, gathers both famous and up-and-coming performers in the comedy world to showcase different types of comedy such as sketch, improv and stand-up while honoring the history of comedy.

Celebrating its 13th year, the festival’s expansive line-up consists of over 200 shows and in its 18-day run from Jan. 23 to Feb. 9. Comedy lovers across the city can witness improv and sketch comedy by The Groundlings and the Upright Citizens Brigade, live podcasts from the Nerdists Podcast and Dan Harmon, cast reunions for Napoleon Dynamite and Revenge of the Nerds and tributes to Tenacious D, Key and Peele and Alan Arkin.

SF State alumni David Owen, Cole Stratton and Janet Varney are the founders that make all of this possible. Owen and Stratton first met on campus during their freshman year as roommates in Mary Park Hall. They met Varney, a theater major at the time, through a mutual friend two years later.  Along with friend Gabriel Diani they formed a sketch comedy group called Totally False People around graduation, said Stratton.

At the time, the group was having a difficult time finding appropriate venues to perform in as the audience in the comedy clubs they attended were more welcoming of stand-up acts. With very few options available, they joined forces with five other local sketch comedy groups: Kasper Hauser, The Meehan Brothers, White Noise Radio Theater, Please Leave The Bronx and The Fresh Robots. Together the six groups rented out a local theatre for a month.

With the experience they had gained from Totally False People and the support of their fellow sketch comedians, the three friends created Sketchfest while still attending SF State as a way for the groups to perform.

“We did everything ourselves. We even went in the box office and sold tickets,” said Owen.

The first Sketchfest was held in January 2002 at the Shelton Theater, a small venue near Union Square that only had 75 seats. Due to local press and word of mouth, the festival gained substantial coverage and sold out 24 shows over four weeks, according to Owen. Varney also credits the “camaraderie” from the other sketch groups as part of the success.

After witnessing outstanding success in the first year the trio decided to expand to a venue with larger seating for the festival’s second year. They moved from the Shelton Theater to the much more spacious Eureka Theater, a venue still used for Sketchfest events today.

“What makes (Sketchfest’s growth) special is that we started as performers ourselves, ” said Stratton, who keeps that fact in mind when inviting and booking other performers. Stratton admits that working among the other comedians is “almost like a party.” The performers are able to hang out with each other and get to know other comedians they hadn’t considered working with before, he said.

Even though Stratton and Varney now live in Los Angeles, they still manage to organize the festival with Owen but don’t expect the festival moving away from San Francisco anytime soon.

“There’s a lack of interest in us starting a Sketchfest in L.A. San Francisco audiences get (the sketch comedy scene). They’re so savvy. L.A is different… they’re more industry based,” said Varney.

The founders credit the experience they gained in college as part of why they were able to create Sketchfest. Stratton said the school’s spirit of self-efficiency is what he values most about his time at SF State.

Since opening the festival to submissions from other sketch comedy groups, the founders have managed to book comedy legends Fred Willard and the Upright Citizens Brigade. Sketchfest continues to grow each year and attracts performances from big names in comedy such as Doug Benson, Reggie Watts and Amy Schumer.