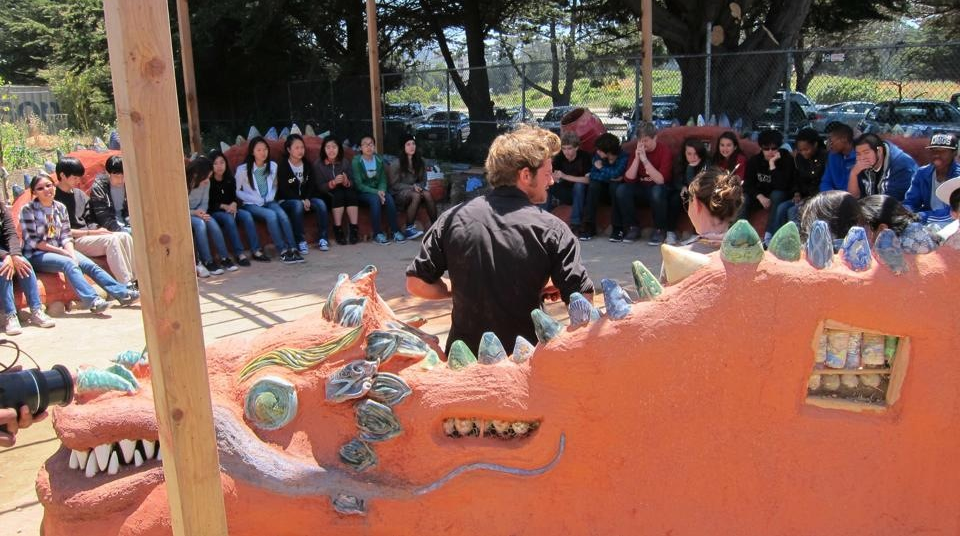 The Environmentally Concerned Organization of Students (ECO Students) has plans to build a bench out of re-used materials, called an “Earthbench,” behind Thornton Hall.

ECO Students president Tyler Wescott intends for the bench to be a symbol of sustainability and the ways in which waste can be re-used. The Earthbench, which the ECO Students plan to work on between March 21 and April 22, will have an inner core made from plastic “bottle bricks” filled with non-biodegradable trash, and an outer layer of sand, clay and straw, according to Wescott.

“We waste a lot as a society as a whole,” said Wescott. “Trash that would just sit in a landfill can be used. This is something of use, and something that’s aesthetically pleasing. It gives back to the campus.”

The building of the Earthbench is part of a larger sustainability movement at SF State. Student volunteers collected a large portion of the trash being used to construct the bricks from bins in the Cesar Chavez Student Center, according to Sustainable Initiatives Coordinator Sharon Daraphonhdeth.

“Instead of ending up in the landfill, these materials are going into this Earthbench, which I think is awesome,” said Daraphonhdeth. “It’s really more like a philosophy of how you use materials.”

UC Davis alum Brennan Blazer Bird, who runs the Peace On Earthbench Movement, developed the concept of Earthbenches. More than 40 Earthbenches have already been built in over ten countries, according to Bird.

While Bird didn’t invent bottle bricks, he did come up with the idea of using them as an inner core for the benches. The outer material is called “cob,” and has been used in building structures for thousands of years, according to Wescott.

“I learned about bottle bricks in 2009 at a music festival in Santa Rosa,” said Bird. “After seeing houses and school buildings built with these bottles stuffed full of trash, I became inspired to try it myself. Earthbenches are a great way to practice this building technique on a smaller scale.”

ECO Students first learned about the benches from a club member who had attended Lowell High School, which has three Earthbenches, according to Wescott. Last year, members of the club went to Zero Waste Youth Convergence at San Francisco City College, an event for students and young people who are involved with the zero waste movement in the city. There, they saw a workshop on how to make the benches and decided that they wanted to make one for the SF State campus, said Wescott.

The project, which costs $500 from ASI funding, involves several other student groups on campus. The ECO Students are planning for the area centered on the Earthbench to include a garden of local plants and to serve as an outdoor education area. The bench will be painted with a tree design that represents the passing of the seasons, according to Wescott.

“It’s going to add to the aesthetic of the campus,” said Wescott. “It will be a legacy for sustainability at SF State.”