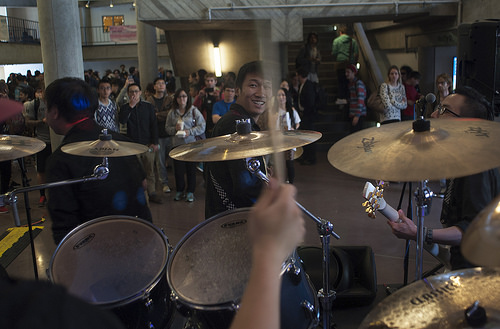 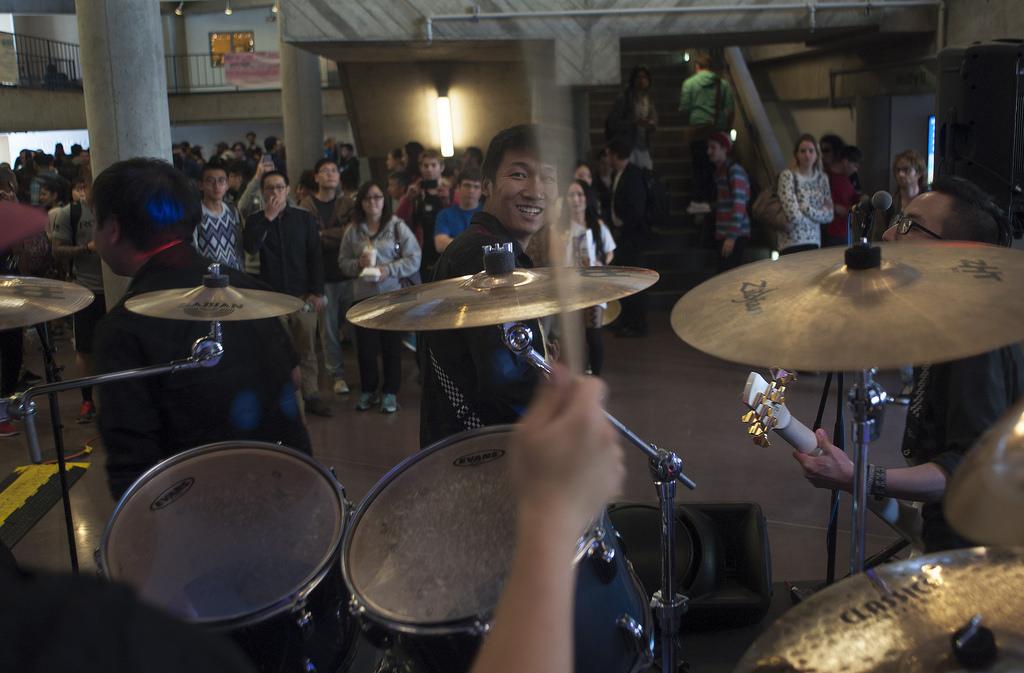 The warm weather was the perfect setting to celebrate the newest eateries that SF State has to offer. The sounds of guitars and the smell of delicious food drifted through the air of the Cesar Chavez Student Center during the grand opening celebration for the new culinary additions to the West Plaza Alcove: Quickly, Hà Tiên Cove and Shah’s Halal Food.

This is a late grand opening celebration, as all three restaurants have been open for some time. Quickly opened on September 2013, Shah’s Halal Food opened a month later and Hà Tiên Cove arrived this semester.

According to David Mashriq, owner of Shah’s Halal Food, there were timing issues, such the restaurants opening at different times, therefore a lot of time was needed to organize the event.

Leonard Corpus, the retail commercial service manager for the Cesar Chavez Student Center, said that all of the operators were more comfortable doing a combined opening .

Eighteen students won prizes such as coupons to the three restaurants, portable wireless speakers and a digital alarm clock from a raffle. Hà Tiên Cove and Shah’s handled out raffle tickets to customers in the days prior to the celebration.

A stage was set up next the bookstore for the feature performers. Nu-metal band Nervous Factor played three sets with songs in Mandarin and English. Three of the band’s six members are SF State students. They played to a small but receptive crowd they had attracted throughout the event.

“Even though you might not understand us, we want you to enjoy the music.” Nervous Factor’s bassist and senior environmental studies major  Leo Deng said to the crowd.

Despite not understanding their Mandarin lyrics, Rob Gittens, a sophomore marketing major, said, “I like the band so far. I like their energy. They’re really rocking out.”

Rapper Mario Cardenas, who goes by the stage name of M-Denas, performed a couple of songs and announced the raffle winners in between Nervous Factor’s sets.

The event ended with a water pong contest hosted by Shah’s Halal Food where 12 contestants showed off their ping pong ball throwing skills in hopes to win prizes.

Junior civil engineering major Robert Medena, 20, took 1st place in the contest and won a 7 inch Nook HD tablet and a voucher for free combo meals at Shah’s Halal Food for a month.

Katharine Fong, owner of Hà Tiên Cove said that she noticed that the restaurant receives a lot of foot traffic from students heading near by locations such as the Humanities and Creative Arts Buildings, but not many coming out of the Business Building and Hensill Hall.

One of the goals of the grand opening event and the flyers hung all over campus was to help draw in more customers.