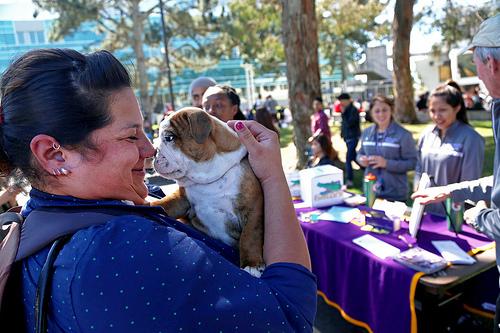 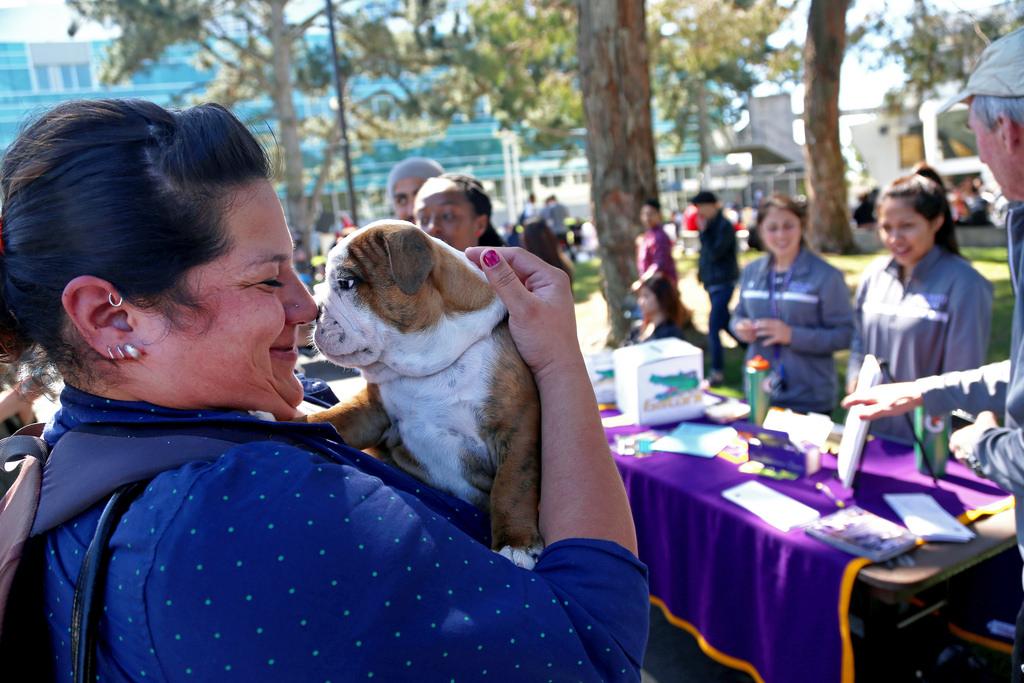 Jillian Picaso, a communicative disorders grad student, holds Chunky the at the Founders Day event at the Cesar Chavez Center Tuesday, March 18. For $1, spectators could hold the puppy. Money raised goes towards the athletic department. Photo by Rachel Aston / Xpress

For the first time in 12 years, more than 25 campus organizations gathered in Malcolm X Plaza for the anniversary of SF State’s establishment where students danced salsa, played carnival games and indulged in free tacos.

Students such as Christopher Arreola, 20, a member of the volunteer organization Coaching Corps, used the anniversary event, Founders Day, as a chance to raise money for their organizations and increase awareness for their causes.

After more than a decade without an event, the organizations participating in Founders Day asked students, alumni, faculty and staff to help reach the goal of 1,899 donations in honor of SF State’s founding year, 1899. Donations will go to variety of college programs, departments and scholarships, according to the SF State Alumni Association.

Founders Day celebrations began in 1999 for the 100-year anniversary, but ended after 2002 for unknown reasons, according to the Alumni Association. At the previous celebration, for the 103rd anniversary, SF State had a 3,000-piece cake that was handed out by campus administrators and deans. This year, Taqueria Girasol gave away 1899 mini tacos in honor of the founding year while student bands in Malcolm X Plaza hosted free musical performances.

“It’s the first time that alumni relations has hosted an event on campus celebrating our founding that has included students, faculty, staff and alumni,” said Doug Hupke, the director of the Alumni Association.

One of the causes that accepted donations is Project Rebound, which aims to help integrate young people who have been or are currently incarcerated.

“The work we do is strictly along the lines of seeing that our clients matriculate and become successful students,” said Joseph Miles, office coordinator for Project Rebound.

Miles said that any funds received would go towards helping these students with tuition, books, school supplies and transportation costs.

Continue the Dream for Academic Excellence, another cause that anyone can donate to, is a scholarship fund on campus established by faculty and staff for AB 540 students with financial need.

“If you are aware of the undocumented AB 540 community, you know that covering the cost of higher education institutions can be hard because many cannot work due to their status and many do not qualify for financial aid,” said Ana Morales, the leader of the scholarship campaign.

According to Morales, the scholarship would allow students to decrease their working hours, focus their time on school and provide a sense of community.

“AB 540 undocumented students live in constant scrutiny due to their immigration status, a presence of support on campus is highly empowering,” Morales said.

“Since the fund is brand new there haven’t been any projects funded yet,” said Sarah Bauer, director of the Student Involvement & Career Center.  “Any recognized student organization (there are over 200 of them) is eligible to apply for funding.”