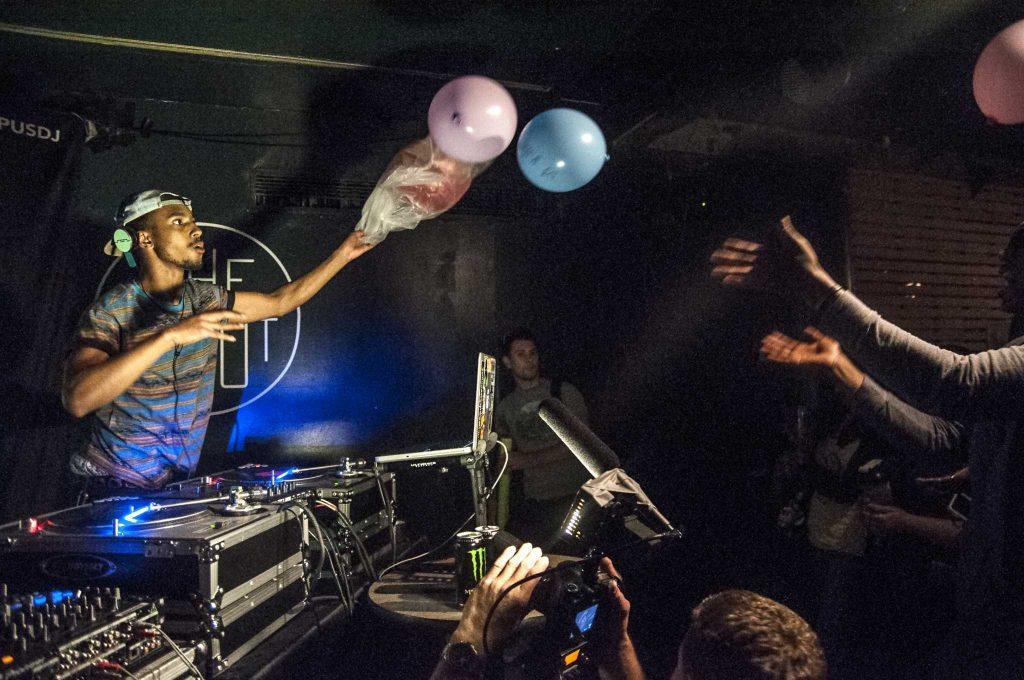 DJ Marcus Lambley releases balloons to the crowd during his set at the second annual Campus DJ battle at The Depot Tuesday, April 8. Lambley, along with three other SF State students, competed against DJs from around the Bay Area to win a a ticket to Hollywood to compete in the National DJ battle in June.

Just as a knight prepares for battle with his sword, a DJ prepares with their beats. In the end, there can only be one student left standing.

Students arrived at The Depot ready to listen to house, techno and hip-hop music from three of SF State’s very own, as well as two other Bay Area DJs. The five artists competed for a $500 cash prize and a ticket to Hollywood to compete in the National DJ battle for a chance to be crowned the best college DJ in America and prizes from sponsors.

According to Evan Shapiro, the event co-founder, the selected competitors were chosen on CampusDJ.com. Whichever artists received the most votes in each region were given automatic entry into the battle, and the remaining selections were chosen by the judges depending on the strength of the song and the number of plays on the site.

Campus DJ is a nationwide competition to discover the best collegiate DJs across the nation. Held across the country, the winners of each regional competition are chosen to compete nationally for the top spot in the U.S. Last year, the winning national collegiate DJ was Flaxo, a native of San Francisco, but won his battle at Columbia University.

Each DJ spun their own original mixes, pumping the crowd up to outwin the contestant before them.

White, a freshman psychology major, is a newbie to the DJ scene, but fell in love with techno music in elementary school when his older brother would listen to it in their childhood home. Although his tastes have since evolved, his passion for music is still there.

Spinning his DJ set with electronic and hip-hop hits, the young, fresh DJ left an impression on the crowd, who cheered him on with their fist pumping to each change in his set.

“(Achieving) student DJ, to me, is balancing schoolwork and music. This (struggle) pushes me more because either having an education or being a DJ would help me in the future,” said White.

Lambley, a junior business management major, said, “(I) listen to classical music to incorporate some of the rhythms into my set.” For him, it is the feeling of the music that artists sense when they compose.

Jose Vitela, a senior business management major, said that he had heard of the event while perusing his Twitter feed one day. Vitela is a fan of house music and wanted to see how the DJs remixed the different types of music together from house to hip-hop.

Brie Shimada, a junior communicates studies major said that she came out to support her friend, but enjoyed the whole event.

After a night of dropped beats left both the crowd and the performers drained, the panel of judges named Trebling the DJ battle winner, who won the cash prize and will move on to compete in National DJ battle in Avalon Hollywood in June 2014.