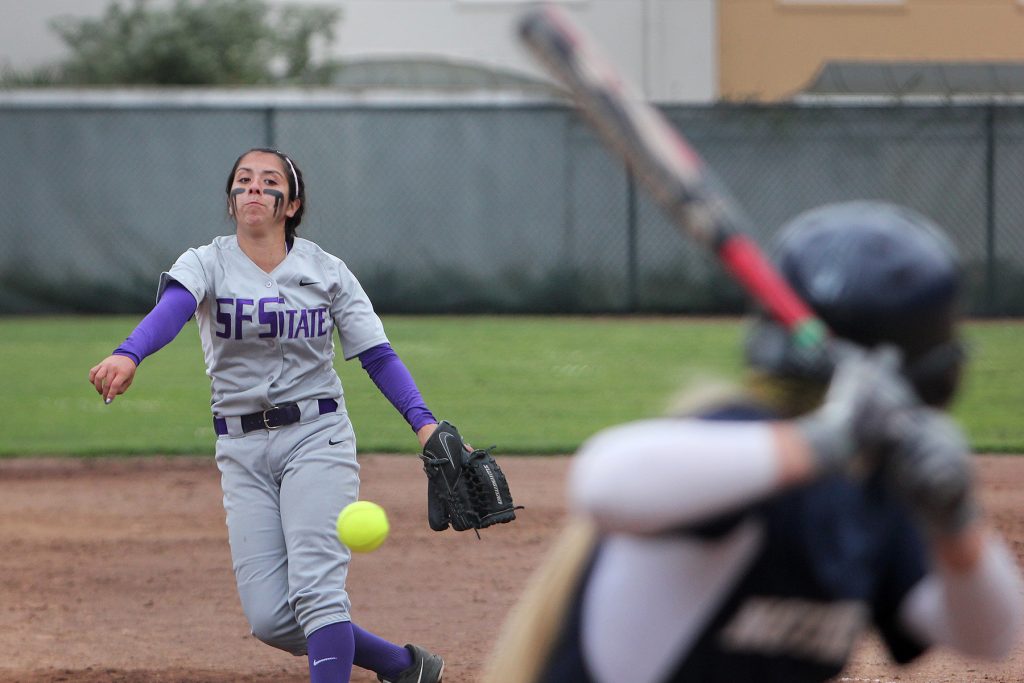 UPDATE: SF State’s dugout cleared out as Marisa Andrade rounded each base with a smile from cheek to cheek, only for the whole team to greet her at home plate after hitting a two-run homerun off the Notre Dame de Namur Argonauts.

The Gators split their doubleheader against the Argonauts, winning the first game 7-2 before dropping the second 4-7. Starting pitcher Courtney Dunkel led the Gators with a strong pitching performance in game one, pitching a total of five innings and only allowing one run.

“I usually don’t start games, I close them,” said Dunkel. “But I was going strong and I caught my groove.”

An early homer in the final game gave the Gators hope, but it was only to be interrupted by costly errors. The Gators had a total of four errors in the second game after committing none in the first.

“Hats off to a team that can take advantage of some errors,” said head coach Cristina Byrne. “We gave them too much.”

Even though the Gators were unable to get the sweep, Andrade was able to put on a power display. Not only did she hit her second homer of the year, but both of them have been off the Argonauts. The first came five days ago when the two teams played in the Tournament of Champions in Turlock, Calif., which SF State went 4-2 in.

“Yeah this is my second homerun and off the same team too,” Andrade said. “And it was great.”

Out of 24 universities that participated, the Gators were able to make it to the final 16, where they were eliminated by Saint Martin’s University. One of those teams they beat en route to the the top 16 were the Argonauts.

Gators will host the UC San Diego Tritons in a four-game series that will begin Friday with a doubleheader.

Gators split doubleheader against Notre Dame de Namur Argonauts, 7-2 and 4-7. Strong pitching performance by Courtney Gunkel, pitching a total of five innings and allowing only one run in game one. In the final game, the Gators went for the long ball as first baseman Marisa Andrade hit a 2-run homerun to left field.