Five local bands go head-to-head in Battle of the Bands, The Pull takes the win 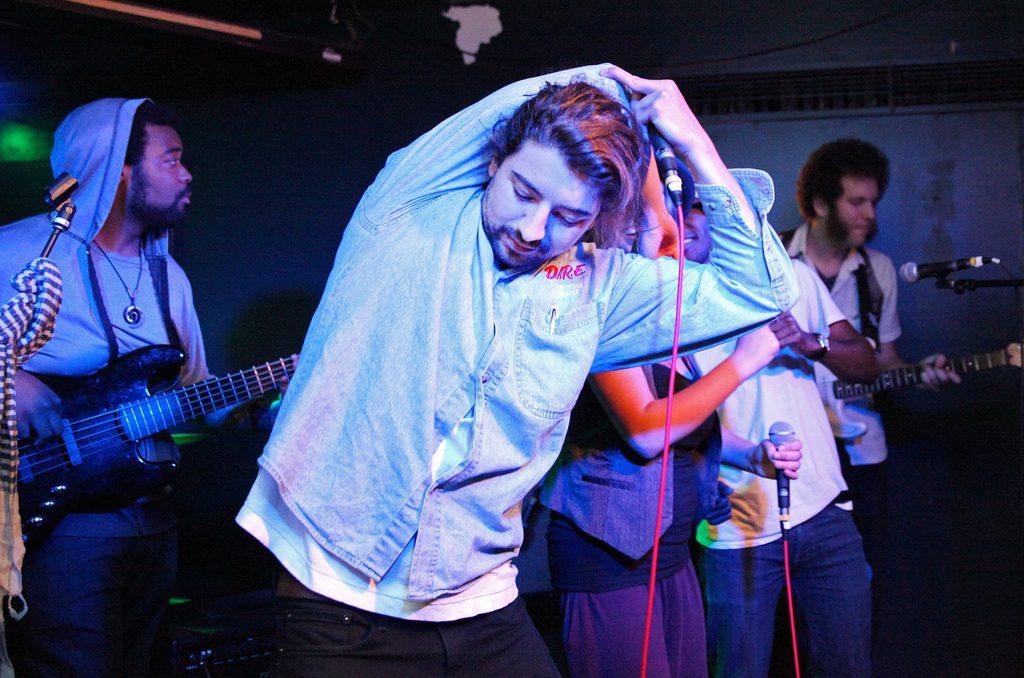 Christian McArdle-Hankin of The Pull stretches in the middle of their set during Battle of the Bands 2014 at The Depot Wednesday, April 9.

The fourth annual Rhythms Music Festival drew in campus talent in the Battle of the Bands Wednesday, April 9. Five bands put it all on the line, strumming and sweating for the chance to be named the best band on campus.

Five groups were chosen out of a selection pool of ten local bands that had applied before the March 21 cut-off date. Local bands Hot Flash Heat Wave, Bobey, The Pull, Edwards Crossing and JAM rose above the rest in the eyes of the panelists, who sought to encompass a wider array of artists than previous years in the competition according to The Depot’s Lizzy Schliessman.

The bands competed for various prizes as well as the chance to play at Thursday night’s Rhythms Music Festival. The top three winning bands won gift certificates of $200, $350 and $500 to Guitar Center.

To choose the top five bands, the judging panel added up the scores they had given each contestant. Those with the most points were automatically added to the competition. The judging panel was comprised of five individuals who represented a diverse crowd of non-biased music lovers, said Schliessman.

After a brief introduction by Schliessmann, the warm glow of The Depot’s Christmas lights set for a dream-like opening to the first band, Edward’s Crossing, whose set began with a heavily instrumental beginning. The set continued with a boppy surf rock love song but the crowd had yet to loosen up. The 40-piece audience could have afforded an early trip to the campus pub, just 30 feet away.

It’s a wonder the foursome didn’t trip over the many wires strewed across the intimate stage of The Depot as they strummed their way into the audience members’ hearts.

James Kare, a senior theater major, felt that is was “really great that the (members of Edward’s Crossing) were dancing, instead of staying still and playing. Their movement encouraged the crowd to join in on the fun, and the atmosphere wouldn’t have been nearly as refreshing if they didn’t dance.”

Next came Brendan Page, also known by his stage name Bobey, accompanied by a fellow singer and friend, Audrey McNamara. Bobey, a junior BECA major, said he chose McNamara to play alongside him in the competition because he “figured he needed a partner in a short amount of time, and she was perfect for it.”

“San Francisco! Should we start?!” yelled Bobey, who along with McNamara held a very calm demeanor as their opening piece spoke a quiet tale for itself. Using a looped recording that they had taken on stage, their sound felt as if it had the power of a 5-piece band. After his masterful fingers picked his guitar to pieces, Bobey and McNamara strutted off the stage to the beat of aseemingly never-ending applause from the audience.

Following shortly after, the boys of Hot Flash Heat Wave joined on the stage. Bassist and singer Ted Davis, a senior in the graphic design program and the only SF State student in the band, said that he, guitarist and singer Adam Abildgaard and drummer Nick Duffy, a Cal State graduate, began jamming together in 2012, before incorporating current guitarist Nathanial Blum.

Davis said the four have trouble defining their sound, but bounce around genre names such as “salty rock” and “cherry pop,” leaving both a pleasant ring in your ears as well as a hankering for some junk food.

As psych rockers JAM boarded the stage, the audience hushed, an ironic motion considering the rock that followed. For missing one of their members, the four-piece ensemble owned the stage. Sophomore BECA major and guitarist Spencer Owings, bassist Ian Arnold, drummer Ben Fischer and singer/guitarist Lucas Fender are natives of San Francisco.

Half the crowd seemed to move on stage as The Pull, a 9-piece band familiar with the SF State music scene, prepared for their set. However, the crowd felt as if it had nearly doubled as the band’s fans flooded into the already packed room.

As if in an attempt to keep his baby warm, singer Christian Mcardle-Hankin tied a scarf around the mike, his dance partner for the evening. The band’s self-declared “King Henry the VIII, minus the theology” sound flooded the hip and knee joints of the whole crowd as each member kept their eyes tightly shut in preparation for the opening number’s drop.

The crowd went wild in the middle of their set as Mcardle-Hankin freestyled off random items from audience members’ pockets. Mcardle-Hankin said that the band has prepared for the battle through a strict diet of beet greens and imitation halal veal, in addition to a blood pact they made with each other about 45 minutes before the show.

At the end of the evening, Schliessmann took the stage to award announce the winners of the evening. In third and second place were Edward’s Crossing and the boys of Hot Flash Heat Wave.