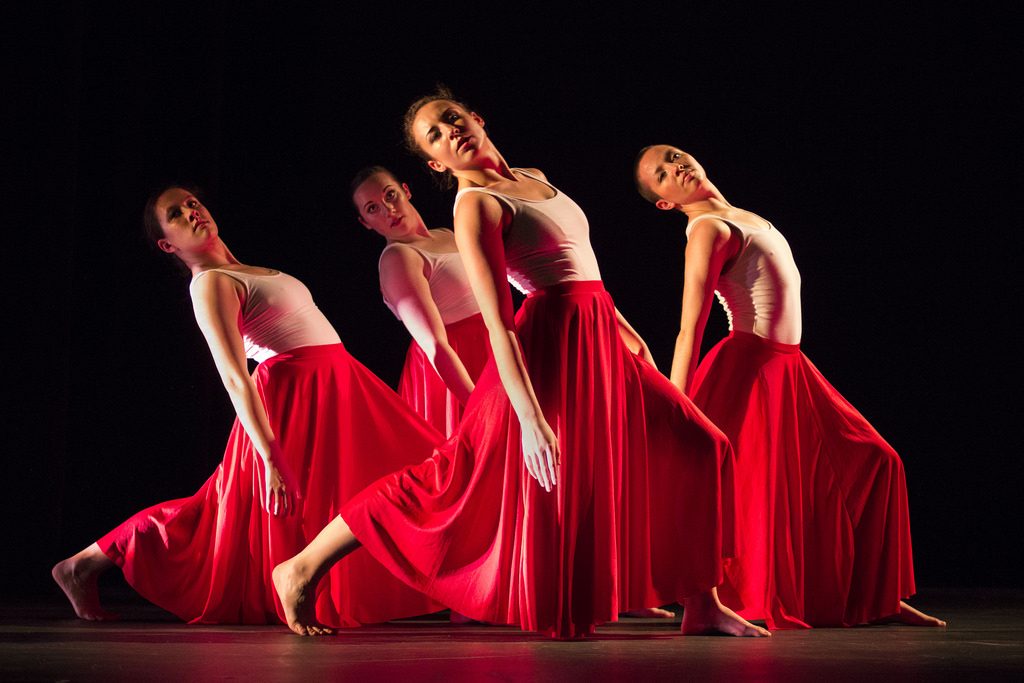 Members of the University Dance Theatre perform a piece entitled "(re)mission" during the dress rehearsal for "Lifesaving Maneuvers" Wednesday, April 9.

Members of the campus community sat in awe of the grace in the dancers’ movements at the School of Music and Dance’s annual University Dance Theater dance concert, titled Lifesaving Maneuvers, after this year’s final piece.

Thursday, April 10, the souls of seven choreographers blossomed through the dancers on the stage of McKenna Theatre during opening night of the three-day long show.

The spring concert is held every year around the same time. This year’s showcase took place April 10-12.

No introduction was given to welcome in the night of fine art as the lights dimmed and dancers gracefully floated their way across stage into the opening formation of the first piece, titled “Korkoro Uhuru,” choreographed by Raissa Simpson.

Carly Bagg, a junior business major, commended the performance for its beauty. “I loved it, I’ve never seen anything like this before. I’m currently taking a dance class on campus and we were asked to come to the performance, so I’m very happy to have a chance to see the performance tonight.”

University Dance Theatre is a yearlong performing ensemble and class which students must audition for at the beginning of the semester. Students are expected to be devoted to the class rehearsals and outside performances.

“There is a good type of pressure on us in UDT because we try to set a good example and high standard for others in the dance program and for those looking to audition for UDT’s upcoming seasons,” according to Simone Wend, a junior dance major and trainee for ODC, whose piece is titled (Re)mission.

Wend, the Student Director for UDT, included that the dancers in UDT are expected to take at least two technique classes a week, which is eight hours, not including the six hours of UDT rehearsal and additional rehearsals.

Along with outside rehearsals and performances, the students are called to dance from 7-11 p.m. during performance time, according to Wend. Combined with their technique classes earlier in the day, dance time averages around eight hours per day.

“All of the hard work we put in is brought to life at the UDT concert, so this time of year is always exciting,” said Wend, understanding that the effort demanded by the program is just the necessary preparation for a future career in dance. “I do feel many of my academic classes get put on the back burner, especially during performance time, because they are not my priority at this point.”

(Re)mission, according to Wend, was inspired by the viewing of her mother’s bone marrow biopsy. “The movement was created from (my mother’s) journey through Leukemia, both biologically and emotionally,” said Went.

“(Re)mission was one of the most visually stimulating pieces I’ve seen in a long time. You could really feel (Wend’s) emotion through each dancers’ bodies,” said Jamie DiMitri, a San Francisco resident and alumnus of SF State. “I can’t wait for next year’s show, already.”