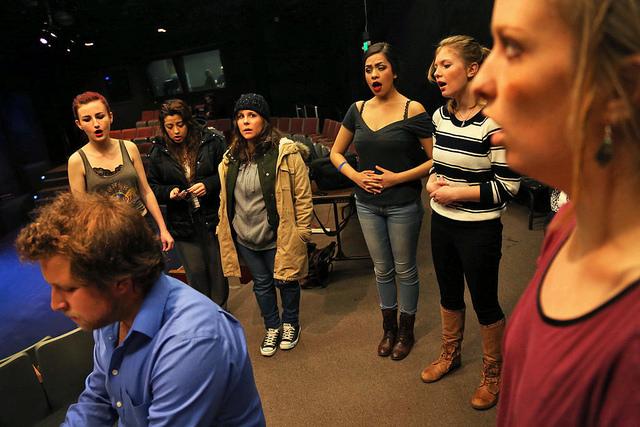 Blue lights canvass the stage. The guitar strums. A woman sings slowly. A beat. Another slams poetic rhymes. They jive. They thrive. Off each other’s lines. Their lives. Then silence. Back to reality.

“In Hollow Time” sets all the right tones with its smooth and soulful story of financial woes, homelessness and passion during the Great Recession set in San Francisco’s own Mission District.

The theatre arts department’s latest production opened with an astonishing performance last Thursday, April 10, to a packed Studio Theatre. The cast treated the audience to a show of funny, sexually-charged quips and scenes and multi-dimensional characters that all shared the spotlight with their acting and singing abilities. All the while, the musicians filled the room with smooth blues and rock ‘n’ roll sounds of a harmonica, piano and guitar trifecta.

Director Roy Conboy said his youth inspired the sounds of “In Hollow Time.”

“When I was younger I was in bands and I had a folk duo with my brother,” Conboy said. “We did a lot of that kind of stuff and I still play all the time. I still write songs for myself and actually I’ve been writing songs that go into my plays for years and years. This was the most musical attempt I’ve ever gotten at.”

It took two semesters to produce the show, as Conboy first wrote act one of his originally written and composed script, then casted for the show and finally rounded up a group of student artists and alumni to help write the remaining acts.

One of the alumni was Carlos Mendoza, who graduated last semester and became the assistant director of the production. Mendoza was greatly satisfied with the audience’s response on opening night because it showed support for the hard work the cast and crew put into the play.

“Literally everyone had their creative seed in it,” Mendoza said.

The production stars a private eye named Salsa, played by Ariella Irula, who tries to solve her latest case of finding the missing financier, played by Elliot Lieberman, and receiving the love of his abandoned wife, Corazon, played by Heather Bridgeman. There are also “hidden women” in the play who each have their own stories to tell and deliver these stories by taking turns slamming poetry inside a circle, a spotlight, a stage for them.

Eric Chen, a freshman and business major, has enjoyed the productions the theatre arts department has been producing. He attended the previous play, “Measure for Measure,” and said it is great that his professor offers the opportunities to see these live shows, which are new for him.

Conboy’s original storyline and use of SF locality make “In Hollow Time” an exciting mixture of old-time detective tales and modern scenery, diverse characters and themes of homelessness and greed all too familiar in this city.

Other present themes, such as having passion, strength and a voice are more powerful than the negatives, and are shown in the beautiful compositions sung by the actors throughout the production. If there was one haunting line in the show to leave with, it would be Salsa describing Corazon’s undying faithfulness:

“Because even in those hollow times and in his hollow eyes her love held strong.”