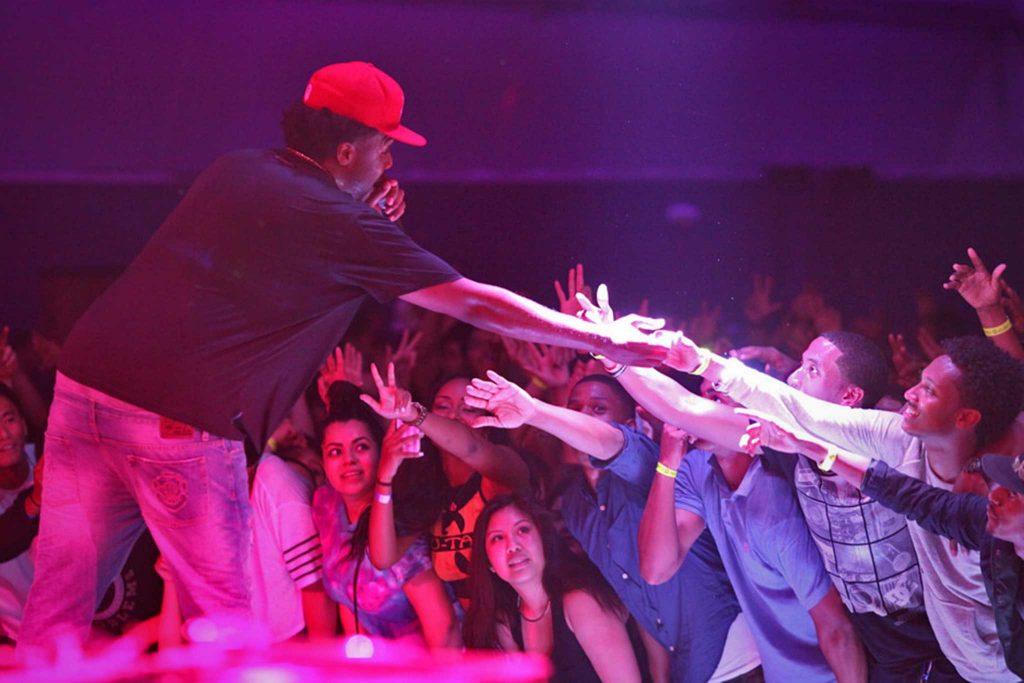 Iamsu! reaches for the crowd during his concert at The Annex on Friday, April 18.

Many students may remember it as a makeshift library, but pulsating lights, pounding bass and a crowd of twerking college students have replaced tables, bookcases and computers in the high ceilinged, warehouse-like structure on the west end of campus. The annex, a place that was once known at SF State as a quiet place to study, was transformed into a place to “turn up” courtesy of a free concert featuring Bay Area rapper Iamsu! and several student hip-hop performers.

Ivan Contreras, Chair of Music and Live Concerts for the Student Life Activities Board, said that the idea for the event was conceived more than a year ago. He wanted to book an artist that would appeal to both local Bay Area students, as well as transplants from Southern California and the rest of the country. He thought Iamsu! fit the mold perfectly.

Sudan Williams, better known as his stage name Iamsu!, is a rapper and producer from Richmond, Calif.. His sound is reminiscent of artists associated with the Hyphy movement, a culture that stemmed from Bay Area hip-hop music in the late 90s.

He has collaborated with artists such as Wiz Khalifa, 50 Cent, Sage the Gemini and E-40. Though he has a strong following in the Bay, his bass-heavy, high-energy songs are reverberating throughout the country.

“A lot of people follow him. He’s very diverse…his beats are Bay Area, but he has LA swag,” said Contreras. “And when I say swag, it’s more than just the clothes, it’s the flavor that he brings to hip-hop.”

Contreras hoped the event, which was free for all SF State students and one pre-registered guest, would boost school spirit and bring more people to campus. According to Contreras, they had to shut down registration several hours before the show. At 300 students and their guests, they were already close to capacity.

“More people will want to come here, stay and be a part of the culture here, because what this is doing is creating culture and community,” said rapper and senior BECA major, M. Payton. “I think things like this are great, not only for artists such as myself to get the opportunity to be exposed and hear great music, but it’s also great because it brings attention to our school.”

M. Payton, who has been rapping and producing his own music since he was 11, felt honored to share the stage with someone like Iamsu!, a local Bay Area musician who made it big. He also has big aspirations to change the way people feel about hip-hop music.

“It all starts with a vision, and I’m a visionary,” he said. “I just really want to do what I love to do and that’s the feeling that I want to spread to everybody else.”

“These student performers, they got so much energy,” said Contreras. “So showcasing our students at SF State, under someone like Iamsu!, that’s big to me…showcasing the talent that we have at our school, to our school.”

Student performer Chris O’Bannon felt that hosting the show on campus helped unite the student body. He thought that having students open for a big-name performer like Iamsu! would inspire and resonate with students.

“I am a student,” said O’Bannon, a sophomore. “After this show, I’m gonna be in class with everybody who’s in the crowd.”

A sea of crop top-donning and snapback-adorned rap fans vigorously bobbed up and down in time to the music, marked by repetitive melodies and lyrics, rapid hi-hats and fast-paced, catchy beats.

“It’s different than the usual Friday night,” said Maddie Elling, a dance major at SF State. “It shakes things up.”

Iamsu! will be shaking things up with his debut album, “Sincerely Yours,” produced by HBK Gang, dropping May 13.