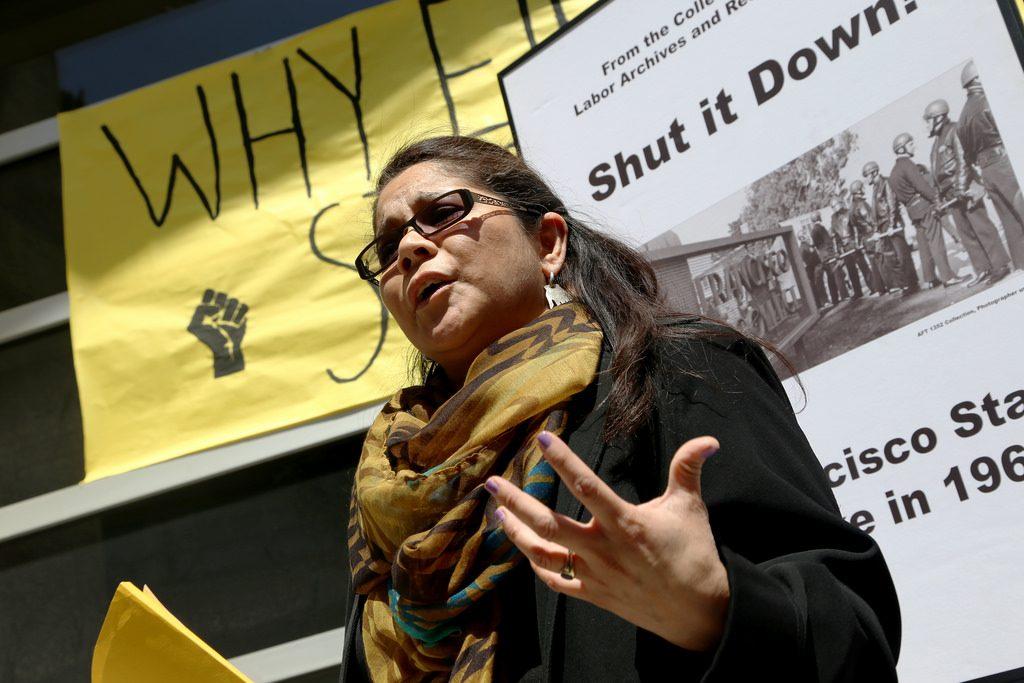 Gabriela Segovia McGahan, an administrative analyst specialist of American Indian Studies, speaks to the crowd at a demonstration to bring attention to the impending budget cuts to the Ethnic Studies department in front of the Ethnic Studies building Wednesday, April 23. Photo by Rachel Aston / Xpress

Ethnic studies may be in danger in California, according to CSU Students for Quality Education.

Students and faculty gathered at a rally organized by SQE in front of the Ethnic Studies and Psychology Building April 23 to speak in favor of protecting the Ethnic Studies department. Several SF State students and professors vocalized why they believed the major is not only still needed, but is more important than ever. 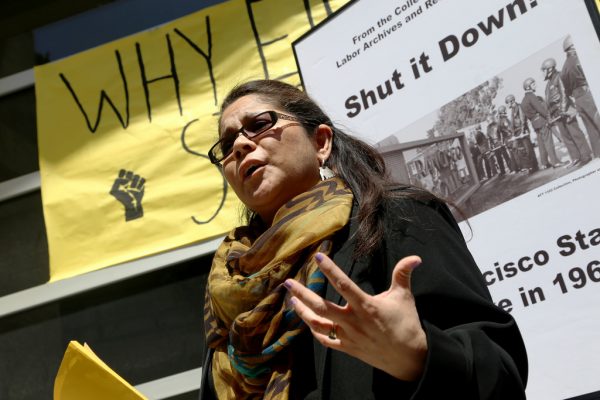 Gabriela Segovia McGahan, an administrative analyst specialist of American Indian Studies, speaks to the crowd at a demonstration to bring attention to the impending budget cuts to the Ethnic Studies department in front of the Ethnic Studies building Wednesday, April 23. Photo by Rachel Aston / Xpress

Ethnic Studies students and faculty members said that these classes allowed students from ethnic minority groups to learn about their own history and gave students the chance to learn about cultures other than their own.

SF State student Eleazar Malaban knows what it’s like to experience racism firsthand. While growing up in Manteca California, he was bullied because of his Filipino heritage.

“I was made fun of every day for being Filipino,” said Malabar, who is the political affairs coordinator of Pilipino American Collegiate Endeavor. “Why? I don’t know, but it made me hate myself. My whole world was changed by my first Ethnic Studies class,” he said. “This is why we really do need Ethnic Studies.”

Jocelyn Polanco, a member of SQE, believes that the low priority placed on ethnic studies is part of a larger trend of universities focusing more on STEM classes, at the expense of liberal arts. “STEM” is an acronym which refers to a movement by schools to focus on science, technology, engineering and mathematics courses.

As a smaller discipline, Ethnic Studies is often one of the first to receive cuts, according to Polanco. San Francisco State is still the only university in the U.S. to have a dedicated college of Ethnic Studies.

“College has become something where people go just to get a job,” said Polanco. “They try to push us out as fast as possible. People think it (ethnic studies) is not needed as much.” 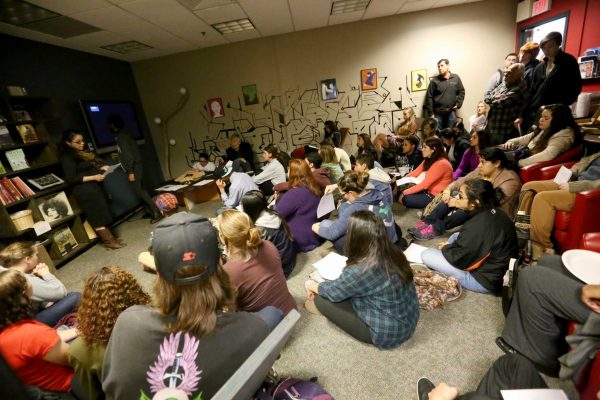 Students gather at the Richard Oaks Memorial Library in the Cesar Chavez Student Center to listen to Gabriela Segovia McGahan, an administrative analyst specialist of American Indian Studies, during a screening about the creation of the ethnic studies department at SF State Wednesday, April 23. Photo by Rachel Aston / Xpress

While the Ethnic Studies Department at SF State, is not currently in jeopardy of being discontinued, other schools in the CSU system have seen cuts. Last semester San Jose State University proposed getting rid of their African American Studies department and folding it into sociology, according to Megan Emme, another member of SQE.

“The country is not in support of ethnic studies programs,” said Laureen Chew, Associate Dean of the College of Ethnic Studies. “That’s not a stretch of anyone’s imagination. The latest one had to do with people in my generation retiring. I think the system thought ‘oh, maybe it’s time to downsize these programs.’”

San Francisco State was the first university in the country to have a college of ethnic studies, which was started to meet the demands of a student strike in 1968. The strike was organized by the Black Student Union and the Third World Liberation Front, according to Chew.

“It was a very different time in the sense that you had the Civil Rights Movement and government supporting things like the War on Poverty. There was a whole movement to correct past wrongs,” said Chew. “One of the main demands (of the strike) was to have a school of ethnic studies with professors of those backgrounds.”

Phil Klasky, a lecturer of American Indian studies at SF State was at the rally not only to defend ethnic studies, but to promote teaching it at the high school level.

Several students and faculty at the rally emphasized that they believe race still matters in the U.S., and for that reason, ethnic studies classes are still needed.

“We would like to believe that we are in a post civil rights moment. We are not,” said Andrew Jolivette, Chair of the American Indian Studies Department. “This is not just about race. Ultimately, it’s about culture.”