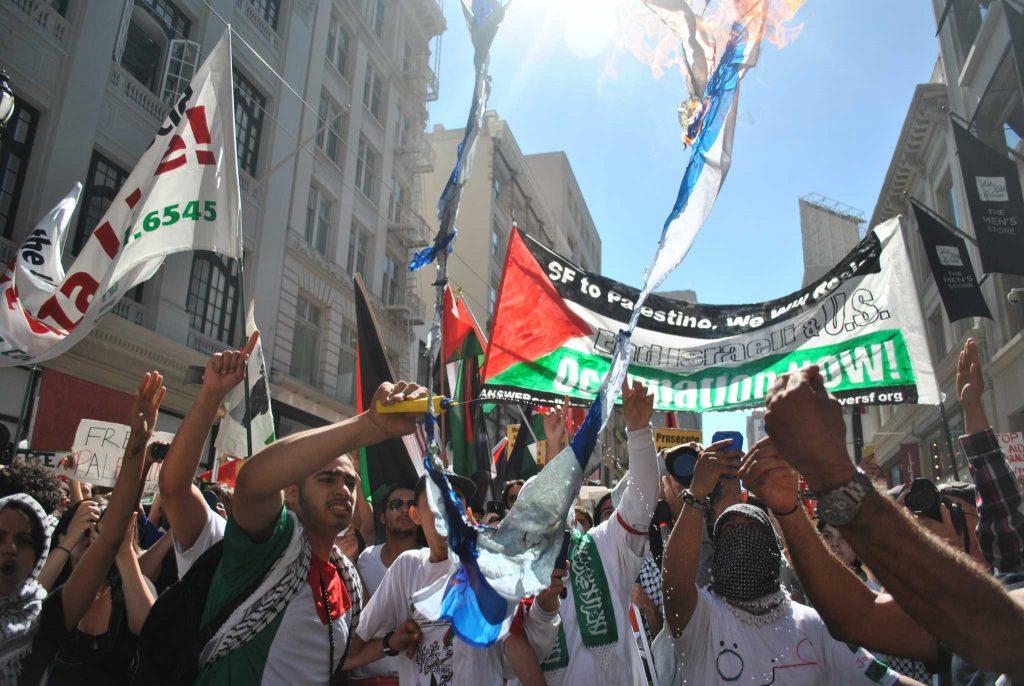 Tensions brewed as thousands of supporters from both sides of the Israeli-Palestine conflict came face to face at the Justin Herman Plaza Saturday.

According to CNN iReport, the abduction and assassination of three Israeli teenagers who were heading home from school in the West Bank followed by retaliation killing of a Palestinian teenager back in June is what has prompted Israeli air strikes and Palestinian rocket attacks.

Back in San Francisco, protesters gathered to demand an end of  both the colonial occupation of Palestine and  the blockade of Gaza, an end to the Israeli bombings over the strip and an end to the United State’s aid to Israel.

“What’s happening right now is a genocide in Gaza, it’s a deliberate killing of civilians,” said Hani Jamah, a dentist from San Jose who spoke at the rally.  “I have been in a state of shock because it’s not only my family, but about the number of casualties that are being killed by missiles.”

According to Jamah, 40 of his family members living in Gaza were recently killed in an Israeli air strike during the fighting.

While many of the protesters were focused on the pro-Palestine spokespeople on the main stage, others drew their attention to the Israeli protesters gathered at the back of the rally. People from both sides yelled profanities and threats at each other.

“What’s going on is that there’s a demonstration in support of a totalitarian and murderous regime in Gaza,” said Gregory Kosinovsky, one of the few hundred Israeli supporters at the back of the rally. “These people have no shame to protest in favor of goons who kill their own people and who use their own people as shields.  I’m here to support the only democracy, the only free-state, a little Israel which is in the midst of this huge totalitarian mess.”

What prompted the “Free Palestine” supporters to rally is the fighting and killings taking place in Gaza.  According to Al Arabiya News, the number of casualties is 1,049 and 6,000 wounded as of Saturday.

The rally ended with a march down Market street and through Union Square where supporters chanted and burned Israeli flags.  Chants such as “One, two, three, four, we don’t want your racist war.  Five, six, seven, eight, Israel’s a part-time state,” could be heard by the spectators who were walking through the streets.

Police intervened as the crowd stood in front of Union Square’s Victoria Secret.  A large signed was held outside of the store that read “Victoria’s dirty secret supporting Israeli war crime,” with a pink bra hanging from a war tank.  The store was temporarily closed as protesters attempted to go inside and protest.

After an energized march through Market street, protesters made their way back to Justin Herman Plaza where the rally came to an end.  But many individuals continued to rally on their own.

According to Richard Becker, the Western coordinator for Answer Coalition, one of the organizations that helped set up the event, 4,000 people attended the rally.

The next rally will be held in the Old Court House Square in Santa Rosa at 1pm on Saturday.