Student documentary in the making reveals realities of human trafficking in cities, countries large and small 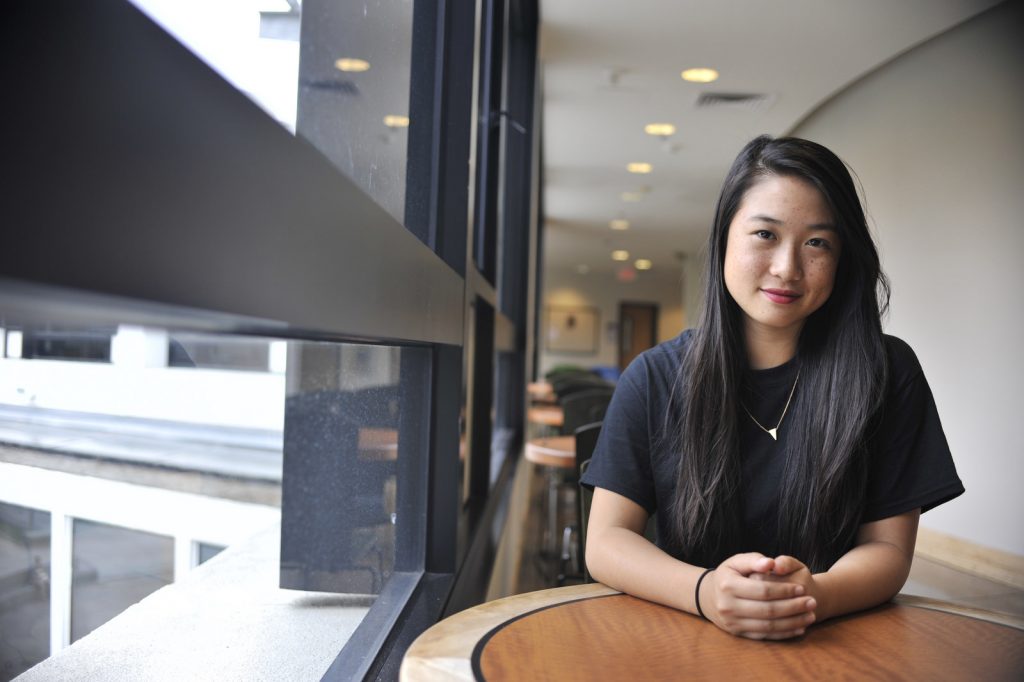 Design and Industry student Caroline Nguyen started filming her documentary “Not In My Neighborhood” this week with the help of mentor Cynthia Biret. Tuesday, Aug 23, 2014. Sara Gobets / Xpress.

When design and industry student Caroline Nguyen heard about a human trafficking raid in her hometown of Westminster, Orange County, she knew she had to take action. Now the SF State sophomore is making a documentary about the dangers of the industry to keep potential victims—from small towns to large countries—safe from harm.

Nguyen, a member of the Girl Scouts of the United States of America, said it was the organization’s ‘gold award,’ which required her to take on a project that would impact her community, that first piqued her interest in the human trafficking trade. She began researching and when she came across a newspaper article about the raid that occurred down the street from her house she instantly knew she had to get the message out to others.

“These (human trafficking occurrences) are in areas like schools, massage parlors, nail parlors, movie theaters; places where kids are all the time,” Nguyen said. “It was crazy and so I wanted to expose this issue not only globally, but also locally.”

In conjunction with her Girl Scout award presentation, Nguyen had also been entered for another award called the TEDx Orange Coast Teen Challenge Award. She later found out she was one of the top three winners of this award by seeing the announcement in her email’s spam folder.

Nguyen felt excited that her fight for this awareness had been noticed and she was later able to present her project in front of 2,000 people, including the mayor, in Westminster. She knew then, since having an interest in marketing, that she could turn her presentation into something bigger. A documentary was just the thing to reach more audiences outside her small town and into larger cities.

Along with being a winner of the contest, Nguyen received a scholarship and two mentors to help with her film, filmmaker Cynthia Biret and TEDx Teen Challenge mentor Philip Topham.

Nguyen is beginning to film her documentary this week, during her 19th birthday, and said the process so far has gone smoothly in her role as producer. Biret added that the film will not be your typical public service announcement.

“Editorially, we will progressively reveal the victims’ day to day lives, and see “clients” looking for young girls for sexual purposes,” Biret said, adding that the film will not show any nudity.

Nguyen said she has enjoyed being able to tell others about why her passion for the film is so important to her. She also said it’s been difficult at times trying to get her film shown, such as when she tried to have a viewing at the high school in her hometown, because parents or school officials found the material inappropriate or too sensitive.

“Human trafficking is actually the second largest world crime in terms of profit, right after drugs,” Nguyen said. “But it’s the world’s largest underrated crime because no one wants to talk about it.”

Nguyen, still determined, continued on in hopes of putting together a well thought out documentary to bring the topic of human trafficking out of the shadows. She thoroughly began to research statistics and conduct interviews to gain more insight into the trade.

“There’s a lot of statistics we need to keep in mind,” she said. “For example, half the victims are only under 16 years old when they first are sold to slavery.”

Initially thinking the trade only occurred in certain countries, Nguyen soon discovered that human trafficking is occurring everywhere—from her small hometown to large countries to big cities, such as San Francisco.

“Because a lot of the victims in the industry are Southeast Asian, we’re looking at Chinatown, Japantown and many of the small towns that we see,” Nguyen said. “Although I’d love to believe that San Francisco is pure of everything, because I love this city, we have to realize that there are things like that that happen here.”

According to a 2010 study on human trafficking prepared for the office of the mayor, city and county of San Francisco, the annual victim estimate in the city ranged from 38 to 800 people. The city works to combat these statistics through its many anti-trafficking nonprofits, including the Asian Anti-Trafficking Collaborative and the SAGE (Standing Against Global Exploitation) Project.

Svetlana Pivchik, adult case manager for the SAGE Project, said the project provides a safe place for victims of abuse, whether substance, sexual or other forms. Pivchik said SAGE provides many components, such as anti-trafficking, and that clients come from all over the Bay Area to receive recovery programs after having “traumatic experiences to their nervous systems.”

Nguyen said she would love to provide a viewing of her finished documentary, so far titled “Not In My Neighborhood,” to the University because students, as well as the public, need to know that the dangers of human trafficking could be happening all around them.

The first viewing of her film will be in September at the next TEDx Teen Challenge conference in Southern California, but after that, viewers can see the film on any platform such as YouTube or TEDx’s mobile app.

“By making this film, we are hoping that the general public will learn to recognize the signs of human trafficking,” Biret said, adding “By becoming aware of this issue, we can help these children step out of the fear and find solutions to create healthier communities.”