The Depot kicks off the semester with musical performances, game nights and more 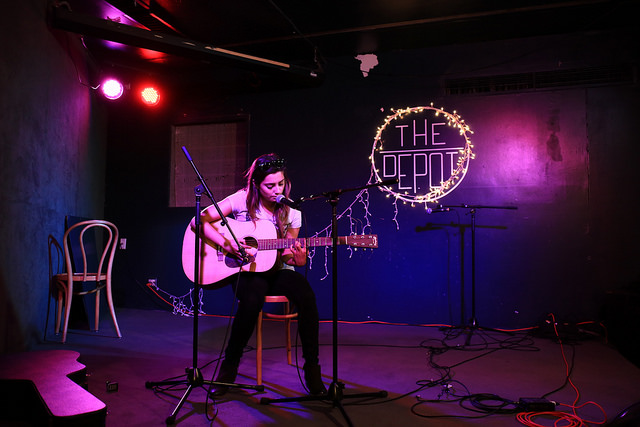 With the pressure of September academic demands settling in thick, new students will be pleased to find free, convenient fun just under their feet on campus.

All events are free and for all ages, unless noted otherwise. The artists listed can be found on Soundcloud or Bandcamp.

The Depot has six events lined up for September to start the semester off strong.

The Depot is providing paint, brushes, music and blank wall space for anyone who wants to come in and get creative. This event is all ages and open to the public – bring a friend and some board games.

Trails & Ways is a four-piece group that describes its sound as electro-pop. They’ve released two EPs and are hitting The Depot in the middle of their U.S tour. If they sound familiar it is because they were on last month’s Outside Lands lineup.

Ó Jafet Vargas, 19, and an International Business major, has never been to The Depot before but is excited to see his favorites.

“I’m really looking forward to this event,” he said. “My favorite band is Dot Vom. They’re the only reason why I’m going on September 4th.”

Dot Vom is a recently-formed, self-described “dream punk (drunk)” group that has a demo for free on Bandcamp and a slew of different members. They are currently playing shows around the Bay Area.

Bobey is a solo act who describes his sound as “playful math loops.” Brendan Page (Bobey), a 21-year-old broadcasting major, said he hopes people like his new sound at the upcoming show.

“I’ve been trying to take my music in a different direction,” said Page. “I’ve been playing a lot of new songs with new equipment and I want to see how people react to it.”

Two Kings is a new group that describes itself as funky electro pop. They do not have an internet presence yet, but you can catch them last on the lineup.

Talk of Shamans is a three-member dance-psych-rock band. They have played at small venues around San Francisco for the past year.

Fronds is another dream-pop group from DO NOT DISTURB records. They are based out of San Francisco and Oakland.

Stoics describe themselves as “three guys in a house, making music” on their Facebook. They categorize their sound as garage/psychedelic rock and are based out of San Francisco.

Bloody Holly calls itself “queasy listening” and is a one-man production out of San Francisco. The creator, Tom Beeler, has multiple tracks available for your ears on Soundcloud.

Everyone is Dirty is an art rock quartet out of Oakland. They formed in 2013 and are releasing their first EP, Dying is Fun, on Sept. 2.

Fish Breath is a four-piece rock band that has been playing around the Bay Area. They are currently signed onto Hairgrowth Records and have an EP for $2 on Bandcamp.

The members of Dinosaurs hail from San Francisco and have a full digital album available on Bandcamp – just name your price. They describe themselves as a “post-buzz band that won’t let your legs stay still.”

The Five Eyes is a four-person “surf-rock experience” from San Francisco with a short n’ sweet album available on Bandcamp.

Comedy Night is an open-mic and comedy showcase. Sign-ups are available before the show.

Lindsay Rodriguez, 19, and an Anthropology major, has attended multiple events at The Depot, but said she would like to see more female artists play there.

“I actually intern at The Depot this year, but I went to practically all of the live music events last year, and a couple of SPEAK events,” Rodriguez said. “I would love to see a lot more student artists play there, especially younger females.”

Keep an eye open for new events and announcements on The Depot’s Facebook page: https://www.facebook.com/thedepotsf