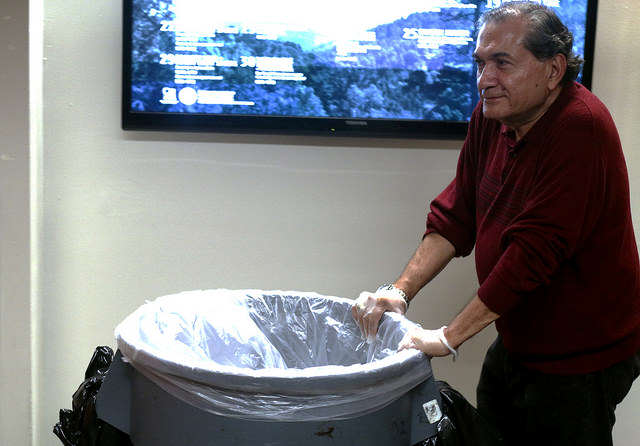 Carlos Rosales a custodian for 22 years at SF State pushes a trash can around the bottom floor of the Cesar Chavez Student Center Tuesday, Sept. 2, 2014.

Despite working on campus for over 30 years, one custodian said he started as a “new employee” July 1 after the University took control of the formerly independent student center, reducing his health benefits and reversing his seniority.

Custodian Augustin Cazares, who has worked for the Cesar Chavez Student Center since 1978, said that he was forced to work while suffering from back pain when not offered paid vacation or sick leave, a result of the student center’s change in management and a shift in custodial contracts.

When custodians ended their contract with the Teamsters union and joined a new contract with the California State University (CSU) Employees’ Union after July 1, they lost their seniority, some of their health benefits and much of their paid sick leave and vacation time.

According to the custodians, they were given the choice of signing the new contract or losing their jobs. Four of the custodians decided to quit or retire rather than take the deal, and the custodial staff is now only 11 people – down from 15 last semester.

“I can’t see a doctor in the daytime because I lose money,” said custodian and former union steward Naresh Mathur, whose paid leave hours were reduced from 16 to six per month. “We are the custodians, we do the dirty jobs. You should thank us.”

Negotiations over severance packages to compensate for the lack of seniority are still ongoing, according to the custodians. Dean of Students Mary Ann Begley confirmed the reduced benefits package, but also said that negotiations are ongoing.

“When the decision to dissolve the student center was agreed on, the University agreed to take over maintenance,” said Begley. “The conversation is still happening with the Teamsters union.”

But the custodians, who fought for union representation for ten years before finally joining the Teamsters Local 856 in 2006, are unsatisfied. Mathur said he feels the University “discriminated against” the custodial staff.

“The choice was to be employed by the University,” said Peter Koo, executive director of ASI. “We tried to ensure that if you had a job with the student center, you would still have a job.”