In the heart of San Francisco’s Tenderloin District, underground artists and theater junkies, including some from SF State, will have the opportunity to do what they love at the 23rd annual SF Fringe Festival. 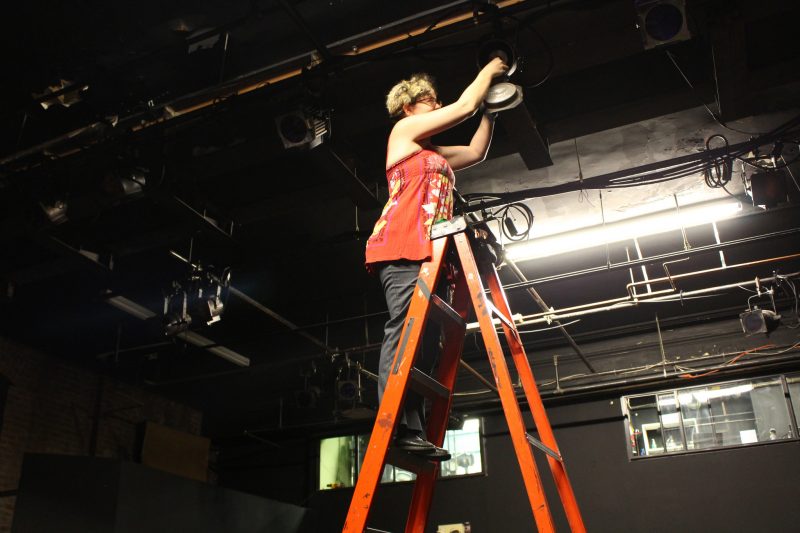 [/media-credit]Amanda Ortmayer hangs the finishing touches in EXIT Theater in preparation for the SF Fringe Festival.

State alumni and students, among hundreds of others, will flock to EXIT Theater to perform over 150 live shows in 16 days, beginning Sept. 5 through Sept. 25.

Gloria McDonald received her bachelor’s of fine arts in theater from SF State in 2013. McDonald is a member of the performing group BrickaBrack and will perform the self-produced play titled “Daffodil: A Play on Happiness.”

“There is so much work beyond acting that goes into a show and I didn’t really realize until I went to SF State,” said McDonald. “I left there as a more rounded theater artist.”

Other groups, such as “A Date for the Evening” and “Genie and Audrey’s Dream Show!”,  have SF State alumni as members.

Amanda Ortmayer, the production manager and technical director of the festival, has managed and produced the festival for 10 years. Ortmayer is responsible for hanging all the masking tape, changing the light bulbs, dealing with all the theater companies on an individual basis and much more.

“I have stayed with the EXIT Theater because the mission statement of the EXIT , in particularly the SF Fringe (Festival), is one that I believe in and I think is very valuable,” Ortmayer said. “(The mission is) to provide opportunity for performers and artists.”

Each year the Festival’s pieces follow a new theme. In previous years, themes for the performances have included topics like cancer, as well as controversial topics such as Hitler. This year the performances are mainly composed of solo acts simply because they are easier and cheaper to produce.

This year, nine shows are performed a night during the festival, with three in each room or venue provided by the theater. On any given night up to 1,000 people can come in and out of the EXIT Theatre doors.

Mikka Bonel, a technician and volunteer for the festival, graduated from SF State in 2009 with a bachelor’s degree in theater arts. Bonel said she widely shows her support in preparing for the festival because she wants to be involved in helping the theater community any way she can.

The festival is non-curated, according to Ortmayer, meaning any individual or group can apply to be perform in the festival.

“Producers aren’t in charge of telling audiences what art is,” Ortmayer said. “It is allowing artists – whether they be popular, experienced or produced, or not – the opportunity to perform and allowing audiences to decide whether they like the show or not.”

At the EXIT Theatre, artists are given first priority. Second priority goes to the audience, which is why tickets have been made so affordable.

The EXIT Theatre is located at 156 Eddy St. and tickets are $10 at the door. All the profits will go right back to the performers.