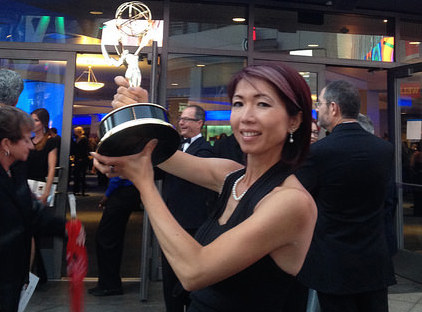 SF State alumna Chikako Suzuki poses with her award in front of Nokia Theater in Los Angeles at the 2014 Creative Arts Emmys, Aug. 16.

A coveted gold statuette was placed in the hands of SF State Alumna Chikako Suzuki, for “Outstanding Art Direction” of the Showtime series “House of Lies” at the 66th Primetime Creative Arts Emmy Awards Aug. 16.

Suzuki cultivated, guided and brought to reality the art design vision for the third season of “House of Lies,” a comedy that focuses on the lives of management consultants who will stop at nothing to close business deals. 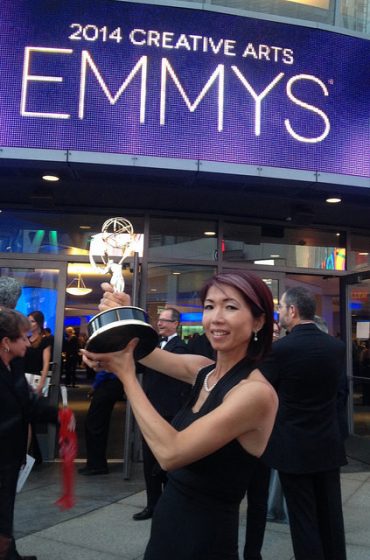 Suzuki was shocked when her name was called to receive the Emmy. “I didn’t expect that! We didn’t think we would get nominated,” she said.

Suzuki expected the HBO comedy “Veep” to sweep all of the awards at the Emmy’s because the show had been nominated and won several awards at the Art Directors Guild, AFI Awards and the Screen Actors Guild Awards.

Suzuki and the rest of the crew were unaware of their nomination until they read comments of congratulations left by friends and co-workers on Facebook.

In addition to her Emmy, Suzuki was nominated for the “Excellence in Production Design” award at the 2014 Art Directors Guild.

Suzuki graduated with a bachelor’s degree in theater arts from SF State in 2000 and pursued her master’s degree in scenic design from the School of Drama at Carnegie Mellon University. Suzuki said that she learned a lot from Carnegie’s program, but that she acquired much of her knowledge and skills from the professors in the art department at SF State.

“I owe so much to professors at the art department,” Suzuki said. “State has so many incredible professors. If you go to other places you will notice that the professors (at SF State) are really good, so students should take advantage of that,” Suzuki said.

“I just loved (set designing),” Suzuki said. “After that I kept taking his classes and then I became a set designer. He was a great professor.”

After receiving her Emmy, Suzuki said the first thing she did once she returned to her seat was snap a picture of the Emmy in her hand and send it to her former professors from SF State.

“I sent them the picture saying ‘This is for you!’,” Suzuki said.

“I was really excited of course,” said Wilson, one of the professors to receive the picture, once he heard that Suzuki had won an Emmy. “Chikako graduated in 2000 and 14 years later here’s this picture in my email of her hand holding an Emmy.”

Wilson said his first impression of Suzuki was that she kept to herself but was a serious student.

“She showed up in my beginning design class and was really shy. She opened up eventually and made a lot of progress,” said Wilson, commenting that Suzuki was a student that went beyond the minimum, and beyond his expectation.

He is excited to see what other accomplishments Suzuki will make, and advised Suzuki to keep working with her strong dedication. “Don’t give up, let’s get another Emmy!” he said.

Students from SF State are encouraged by Suzuki’s accomplishments.

“It’s great for our school because it will really show people how great our cinema, BECA, or any major related to arts really is. It’s just showing students that people who graduate from our school really can do amazing things,” Morado said.

Currently Suzuki is art director for the third season of HBO’s show, “The Newsroom” and ABC’s “Scandal”.