The Depot welcomes Trails and Ways, dot Vom, Bobey and Two Kings to the stage 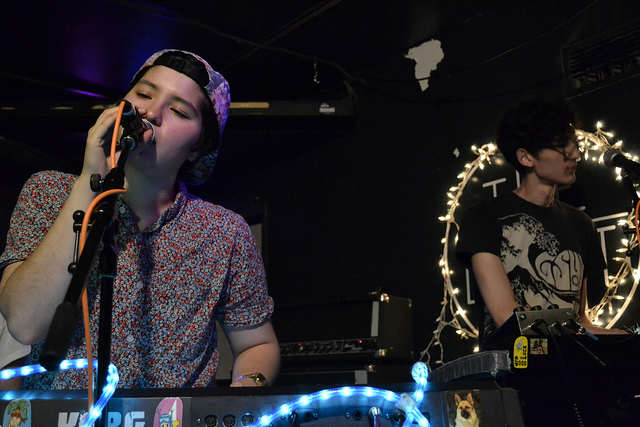 The Depot is nestled next to the campus pub in a lower-level nook of the Cesar Chavez Student Center. The location tucked away enough to avoid immediate overcrowding, but the lines for beer are often out the door and people are always milling around the venue to check out new music.

This week, The Depot drew a full crowd to its first live music show of September with performances by local bands Trails and Ways, dot Vom, Bobey and Two Kings.

Bobey opened the show Thursday, Sept. 4, with his gentle, quiet stage presence, but quickly grabbed the audience’s attention early on in his set.

“Give us the D!” came a reply from the back. “You got it,” replied Bobey, without a hitch.

The crowd milled freely back and forth from the pub to the venue during his five-song set. Bobey’s music is built around loops: he’s a one-man band with an electric-acoustic guitar, a variable vocal range, and a set of pedals that he uses to distort and loop his music. The effect created a dreamscape of sound that the crowd encouraged with swaying and cheers.

Second in line was a local band called Two Kings, who brought in a slow-jam set that pulled instrumental influence from both jazz and blues. The band played facing each other for part of the show, wrapped up in the music and smiling.

The room filled completely for the third band, dot Vom, a five-piece group from the Bay Area who were armed with a keyboard covered in stickers and Christmas lights. Danny Ricci, 23, is the lead vocalist for the group and says that they look for an emotional response to their music.

“I mostly aim for storytelling, in a really basic emotional sense,” Ricci said. “If we have managed to elicit any kind of emotional reaction from the audience, we feel pretty successful about it. Even if we made them cry. Crying is very important to dot Vom.”

Ricci added that dot Vom’s music can not be summed up in one song.

“If I were to give a super insecure disclaimer to a new audience member, it would be that none of our songs is fully representative of our whole sound,” Ricci said.

The crowd responded solidly to dot Vom throughout their set but swelled in size while Trails and Ways set up. Keith Brown, 26, plays rhythm guitar for Trails and Ways and said the band aims for “full transcendence of body/mind and dancing” during their sets. Trails and Ways is from Oakland and appeared this summer at Outside Lands.

“[We’ve] got a first LP to bring to the world before very long,” Brown said about the band’s current work.

The next performance by local bands at The Depot occurs Sept.10, featuring Talk of Shamans, The Fronds, The Stoics and Bloody Holly.