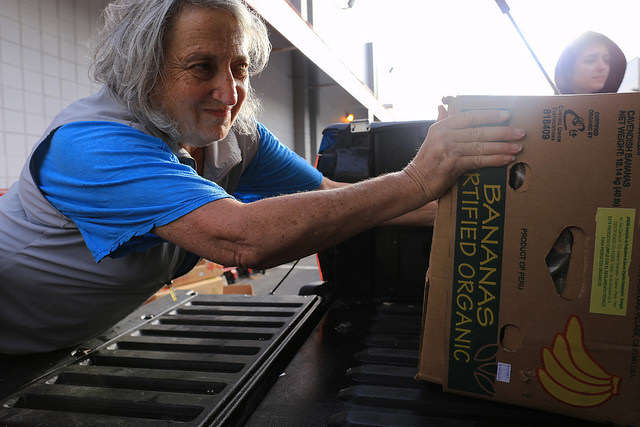 Ann Kirk, volunteer at Food Runners, loads donated food from Trader Joes into their truck on Sunday, Aug. 31, 2014. Food Runners collects food that won't be sold at supermarkets, restaurants, etc. and distributes them to people in need all over the city. Ryan Leibrich/Xpress.

Cooking class just ended at Tante Marie’s Cooking School in the North Beach district of San Francisco and wedding cakes were on the agenda. The owner of the culinary school, Mary Risley, stared at the seven beautiful masterpieces created by the hands of her talented students.

It would be a crime to throw the cakes away when they could and should be enjoyed by someone, she thought. Why toss perfectly good food when there are hungry people all over the city to consume it? Risley decided to take charge toward the hunger here in San Francisco.

“I contacted my friend Carol in Berkeley who ran Daily Bread Project that was taking excess food to shelters and asked her advice on how to get a similar program going in San Francisco,” Risley said.

Since Risley’s epiphany in 1987, Food Runners continues to cater to the community today, literally. Everyday, the San Francisco-exclusive organization serves as a focal point where volunteers, donors and recipients come together to help solve the issue of hunger in the community.

Businesses such as Zynga, Whole Foods, Cisco, Uber and Foxtail Catering are a few that regularly donate leftover perishable foods to Food Runners, where a truck driver and many volunteers deliver directly to agencies and clinics to feed the hungry.

It’s not just big tech companies, farmers’ markets and supermarkets that donate their leftover goods to the organization though. Schools such as Community College of San Francisco, University of San Francisco and our very own SF State all participate in the food-giving experience.

“I have been working with Food Runners for a couple of years now on and off,” said Robert Herndon, purchasing and receiving manager for Chartwells at SF State.

Chartwells Higher Education dining services provide food for SF State’s three on-campus housing dining services: City Eats Dining Center, Café in the Park at Mary Park Hall and The Bricks at Mary Ward Hall. Herndon began working with Food Runners after he was referred to them by Glide Memorial Church, another organization that uses the service.

“The experience has been pretty great,” Herndon said. “If I have donations that need to be made, it’s usually around the holidays. I would contact (Nancy) and let her know that I had food to donate then would provide someone to come pick up whatever is donated. They respond pretty quickly.”

Nancy Hahn, director of operations and volunteer coordinator for the organization said it is rewarding knowing that Food Runners helps fellow citizens in need.

“I really hope to see greater awareness of food waste and the oversupplying of food (including the packaging involved) in the modern workplace model,” Hahn said.

Couple Ed Sykes and Ann Kirk have been volunteering for Food Runners for three years now, driving their navy blue pick-up truck to the Trader Joe’s on Geary and Masonic. Here, they pick up leftover meats, vegetables and fruits, dried food, eggs and more and deliver the goods to the Walden House in the Fillmore district. This is followed by a delivery of flowers to St. Anthony’s dining room where they volunteer, serving food in the dining hall to whomever’s in need.

“We look forward to Sunday every week,” said Kirk, as she strategically organized boxes of apples, bananas and cereals to fit perfectly in the back of her pick-up in the Trader Joe’s docking area. “When we volunteer for Food Runners, all sides end up happy. Ed and I get the satisfaction of helping those in need, and businesses and markets don’t have to waste their excess food and people are fed.”

After 27 years of reducing the hunger in San Francisco, Food Runners continues its booming business of transporting excess food to local agencies serving those in need.

“There is enough food in this country to feed everyone,” Risley said. “It’s a matter of distribution. I want to see every morsel of excess edible food in San Francisco going to people who need it and not in the garbage.”