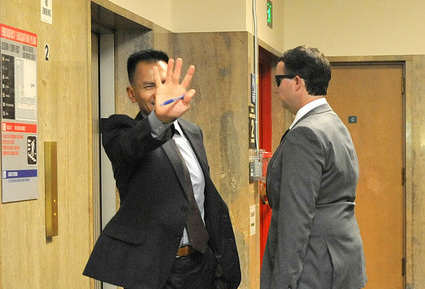 Mark Landis's attorney, Thanh Ngo, attempts to block his client from the cameras after his trial in courtroom Dept. 17 at the San Francisco Hall of Justive, Tuesday Sept. 9, 2014.

The San Francisco District Attorney charged Mark Landis with a 16th count of invasion of privacy Tuesday after police arrested the former SF State professor in July for allegedly filming students while they used his restroom.

Assistant District Attorney Laura Carwile issued an expanded protective order which requires Landis to keep a distance of 150 yards and prohibits any form of contact with the 16th victim.

“The victims are scared and don’t want to be contacted by Mr. Landis,” Carwile said in the courtroom.

Thanh Ngo, defense attorney for Landis, said the protective order was excessive since Landis has not contacted any of the other victims in the case. Ngo added that Landis lost his job and had to move out of his Castro home since the charges were brought against him.

In court, Carwile said police seized Landis’ passport through a search warrant and that it is being used as evidence for the case. Carwile asked that Landis not request another.

In December, the University learned that Landis allegedly recorded students while they used the restroom during parties he hosted at his Castro home. He was arrested by the San Francisco Sheriff’s Department (SFSD) July 24, and was later released on $100,000 bail.

Landis, who arrived late to the Hall of Justice for the hearing, was an accounting professor at SF State until his resignation July 18.

The hearing was the first time Landis arrived in court since his arrest. On a prior date, Ngo pleaded not guilty to 15 counts of invasion of privacy on Landis’ behalf.

“I don’t really want to talk to you,” Ngo said outside the courtroom. “Any information I give you doesn’t really help me.”

The San Francisco District Attorney’s Office said they could not release any information on the case, which remains under investigation, but urged potential victims to come forward.

Landis is expected to appear in court Nov. 5 at 9 a.m.