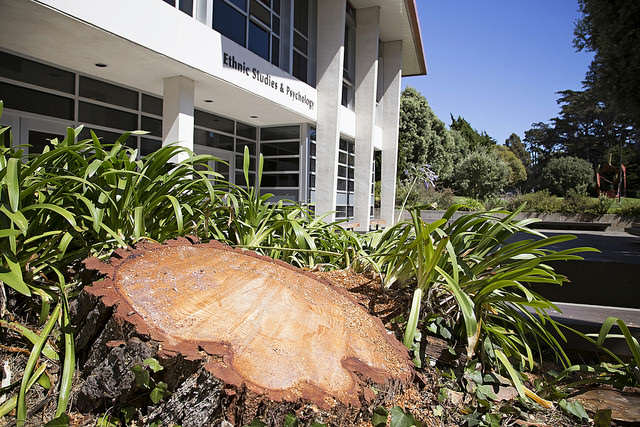 A stump is all that remains of a tree that was taken down in front of the Ethnic Studies and Pyschology Building, Monday, Sept. 15, 2014.

An expert who surveyed the area over the summer recommended several trees for removal because of their weakening structural integrity and proximity to high-density walkways, according to an email to faculty.

SF State plans to remove the most dangerous 55 trees within the next two months, starting with the mature Italian Stone Pine that was cut down outside the Ethnic Studies and Psychology Building last week.

“Without question, the towering trees in and around the quad have a huge aesthetic and environmental value,” said Simon Lam, the interim vice president of Physical Planning and Development, in an email.

“I assure you that our goal is to preserve our mature trees, plant new trees on an ongoing basis, and remove trees only as a last resort when their condition poses a significant risk.”

The felling process obstructed the entrance to the building, raising additional concerns about public safety, according to Wei Ming Dariotis, associate professor of Asian American Studies and former president of the SF State Chapter of the California Faculty Association.

“My first reaction was ‘why don’t they schedule this for a Friday or a weekend when there are fewer people?” Dariotis said.

The trees at SF State suffer from a handful of factors that contribute to their death and ultimate removal. Common issues like age, weather damage and bad pruning practices can lead to disease and insect infestations that kill trees, according to SF State’s Forest Renewal Fund webpage.

Miguel Casuso, administrative analyst for the Cesar E. Chavez Institute in the Ethnic Studies and Psychology building, said he did not complain about the removal of the tree, but he responded to the original email, suggesting that the administration give students and staff more of a warning when they plan to make drastic changes to the landscape.

“It’s still a living thing that people are really accustomed to having there and if it’s suddenly yanked out it really hurts,” Casuso said. “It’s like it’s this violent thing, and we have an emotional reaction to it. And if we don’t know that there are good reasons for it, we’re going to get upset.”

For the moment, the student body knows little about the campus forest management plan, according to the email, because the planning department left it to the faculty and staff to inform students.

According to Michelle Meyers, director of the San Francisco Bay Area Chapter of the Sierra Club, maintaining healthy trees in an urban setting has numerous benefits to people. Among those is the aesthetic value of contributing to a positive working environment for students and staff.

“People are happier and healthier when they’re around trees,” said Meyers.