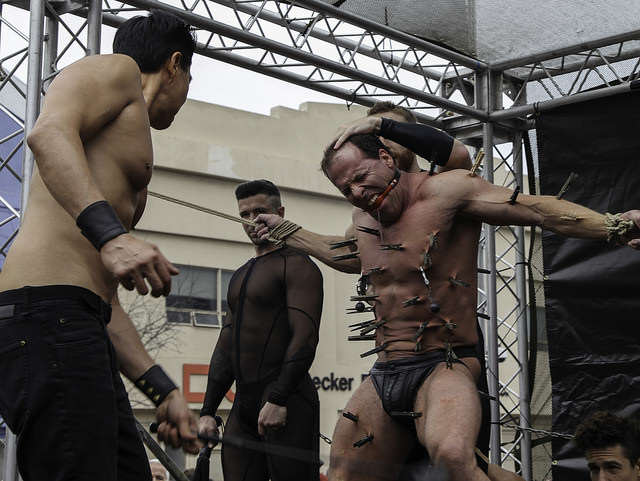 In a crowd full of nakedness, accompanied by a sea of leather, live whippings and ball gags, nothing can compare to San Francisco’s Folsom Street Fair.

The largest fetish and leather fair in the world hit the SF streets for the 30th year in a row this Sunday, filling five blocks on Folsom Street from Eighth to 13th Streets. The Fair is an opportunity, not only for leather fanatics, but for people all over the world to express their inner sexual being and desires.

Chad Lee, an SF State alumnus and volunteer for San Francisco Leathermen’s Discussion Group, worked the Fair’s clothing check Sunday and said he loves coming back to the annual event.

“It’s not just about fetish,” Lee said. “It’s about individuality and that’s why I keep coming and that’s why I’m having such a great time, because I never quite know what to expect, except for something fun and different.”

Walking from Civic Center Bart to the corner of 8th and Folsom, anticipation was high. Those heading to the event stood out like nipple clamps in a pile of daisies, especially among the techies and business people who on a normal day crowd the same streets.

Bouncing attendants flocked to various stages where bands such as Bright Light Bright Light and Austra performed live for the bondage-clad crowd of more than 400,000 people. More than 200 vendors, selling anything from sex toys to garlic fries were along a number of exhibits ranging from free HIV testing to Whore Magazine.

“(The Fair) is just a wonderful event (filled with) a lot of great people that are very gracious and giving,” said Todd Collins, the medical manager at the Fair. “Everyone gets to do their own thing and no matter what it is, they can do it here at the Folsom Street Fair. There is always something new to see here. It is always changing and always evolving.”

In 1984, Kathleen Connell and Michael Valerio founded the Fair through their deep roots within San Francisco’s South of Market (SoMa) District.

“The Folsom Fair did not start out as a leather event,” according to University of Michigan Professor Gayle Rubin, who hosted a discussion on the history of the Fair Sept. 17. “The leatherization of the Fair was a slow process that happened in spurts, until the late 90’s and early 2000’s, when it was finally established as a leather-focused event.”

Rubin teaches LGBT and women’s studies and is highly active in the lesbian sadomasochism culture, which involves the giving or receiving of pleasure from acts involving pain, agony and humiliation.

The Fair is always scheduled to take place the last Sunday in Sept., but due to this year’s Oracle Appreciation Event, the Folsom Street Fair occurred a week early.

Each year hundreds of thousands flock to the Fair, many of whom don’t participate in the culture, but are regardless curious to see what the fuss is all about. The Fair attracts people of all kinds, some of who thrive off the pleasure and pain and some who leave terrified by the end of the afternoon.