Campus is divided over support of controversial anti-sugar measure 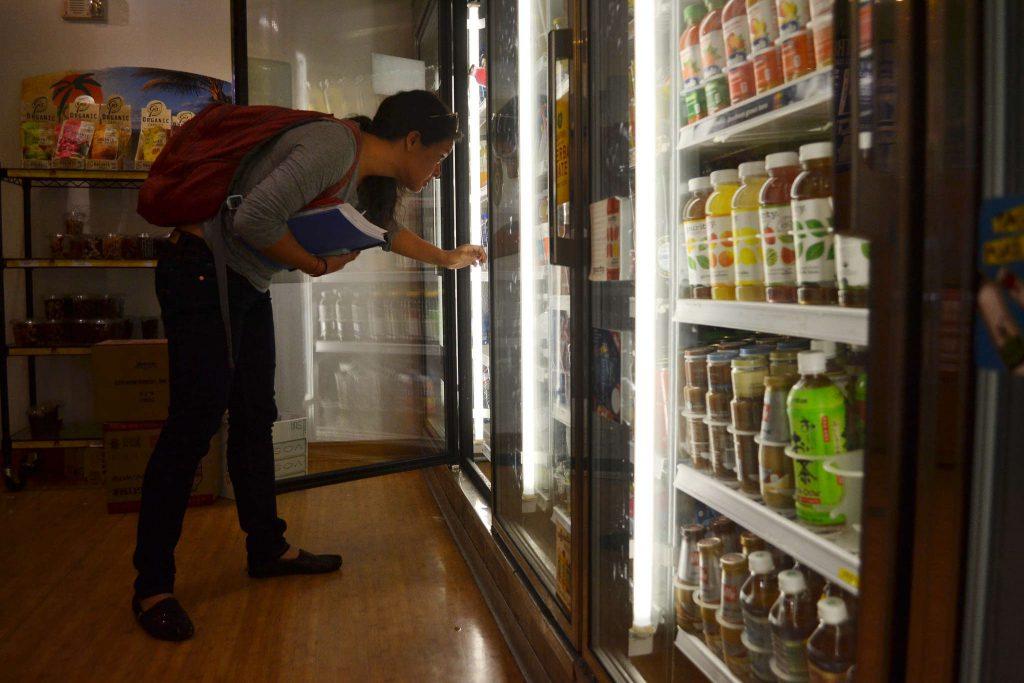 Thursday, Sept. 25, Hospitality and tourism major Amanda Hoang decides on a drink between classes at Healthy U in the Cezar Chavez Student Center.

If a tax measure on the November ballot passes, SF State students will soon pay an extra fee for their favorite sugary beverages.

Diet drinks, natural fruit juice and drinks blended on-site will not be affected. The extra funds would go toward school programs, parks, recreation centers and other city services, according to Wiener.

“It’s going to generate millions and millions of dollars to improve the nutrition of our lowest income communities,” Wiener said during a debate on Measure E at SF State Sept. 24. “This is a public health measure.”

The primary goal of Measure E is to reduce sugar consumption, according to Wiener, who attributed the increase in obesity and diabetes to these beverages. If Measure E passes, Wiener expects to raise around $30 million per year for schools, parks and community organizations.

According to ‘No On Measure E’ campaign director Nick Panagopoulos, the measure would be “regressive, unfair and condescending” and would ultimately hurt the lowest income San Franciscans by driving up the price of groceries in general.

“It’s not a sales tax, it’s a distribution tax,” Panagopoulos said at the debate. “The California constitution doesn’t let them tax food or beverages.”

Both Wiener and Panagopoulos said that the tax will be paid by merchants at the point of distribution, rather than directly by the consumer. It will then be up to individual store and restaurant owners whether to add the extra cost directly to the taxed product, spread it around to all items or absorb it.

“I don’t believe it’s going to pass,” said ‘No On Measure E’ spokesperson Roger Salazar. “I don’t think voters are at all open to the government regulating their food choices, especially through taxes.”

Maureen Erwin of ‘Yes On E’ said the measure is “within striking distance” of reaching the two-thirds majority needed to pass.

According to Panagopoulos, more than 1,000 small businesses and some political clubs oppose Measure E. However, all medical organizations in the city and labor unions support it, Wiener said.

“I think we’ve got a shot,” Erwin said. “If you look at our endorsement list next to theirs, it’s not even in the same realm.”

The SF State community is divided about whether or not to support the measure.

Elsa Ramos, who manages the Lobby Shop and Healthy U in the Student Center, said she thinks that if the measure passes, the two stores will absorb the extra cost rather than pass the burden on to students. Sodas are the single biggest selling item at the Lobby Shop in the Cesar Chavez Student Center, according to Ramos.

Ramos said she still might vote in favor of Measure E, because of the health programs it will help fund. Others have stronger feelings about the measure, especially its intent to impact personal choices.

“Whose business is it if I want to drink a Coke once a month,” said John Wilson, a cashier at Healthy U. “I don’t think it’s appropriate.”

Broadcast and Electronic Communication Arts major Oscar Maciel said he would support Measure E, because he believes it would encourage people to consume less sugar and make healthier choices.

“I haven’t really seen any better ideas,” Maciel said. “There are a lot of things that are clearly junk, and people just buy them because they’re cheap. I would absolutely support it.”

According to Erwin, similar measures have been proposed without passing, but that does not mean the proponents of Measure E plan to give up if voters reject it in November.

“If it doesn’t happen now, it will happen again in the future,” Wiener said.