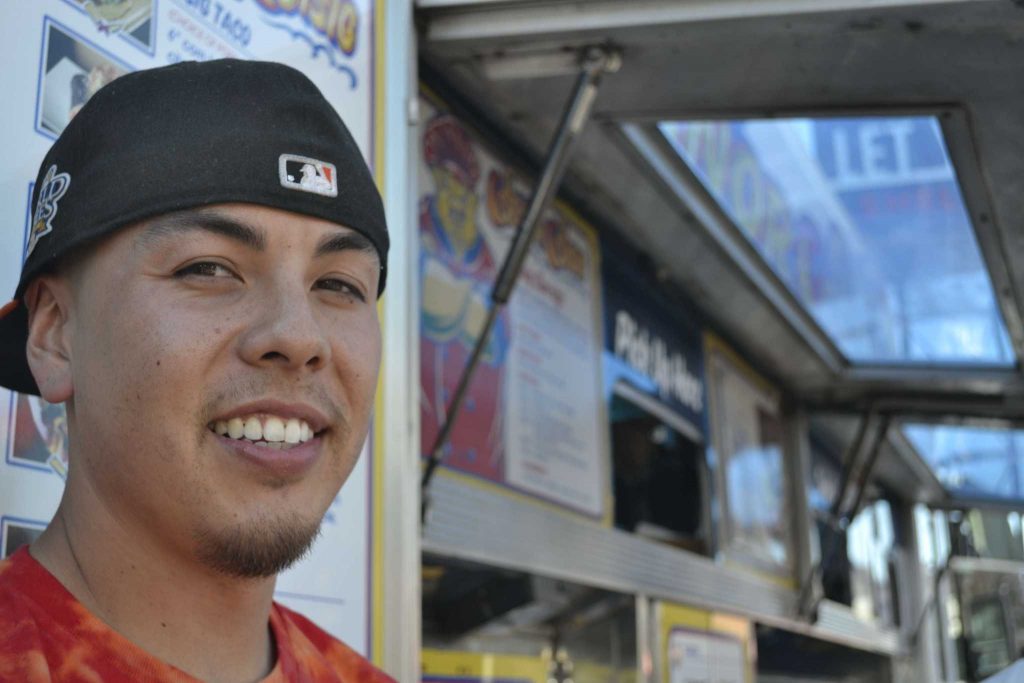 Sf State alumnus and co-founder of Señor SiSig Evan Kidera takes a break from his busy day to pose for a photo in front of his truck at the Soma Street Food Park Friday afternoon, Oct. 3, 2014.

After graduating from SF State and working in management for eight years, Evan Kidera realized that he needed to make a change in his life, specifically, a change in career paths.

By combining two of his most beloved interests—business and food—the Señor Sisig food truck was born.

It all started in 2008 when Kidera, an asian-american studies alumnus, visited Southern California and stumbled upon the growing popularity of the food truck industry.

At the time, there were only a couple of basic taco trucks in San Francisco, according to Kidera, but in Southern California he saw the popularity of them branching out and specializing in fusion cuisine. Kidera wanted to bring the trend to the Bay Area, but with a twist.

With chefs for parents, Kidera is no stranger to the food industry, but he could not start his food truck business alone knowing nothing about food trucks or how the business worked.

After doing research, meeting up with different food truck owners around the Bay Area and gaining knowledge on the food truck business, Kidera asked Gil Payumo, a close friend of his since high school, to join in on his venture.

Payumo graduated from the California Culinary Academy and had a steady career as a sous chef at the San Mateo Marriott hotel when Kidera approached him with his idea.

“He came up to me and said ‘Hey I’m thinking about doing this food truck, what do you think about it?’” Payumo said. “And right then and there when he asked me, I knew what we were going to do: sisig and tacos—Filipino and Mexican fusion.”

Payumo brought the sisig, a Filipino pork dish flavored with chili peppers and citrus, to Señor Sisig with his family’s authentic recipes.

Kidera said his idea was to conform to the general public and disguise the stand-out flavors with a Mexican look to appeal to more people here in California.

The duo opened up the first truck after about a year and a half of creating the brand of Señor Sisig, which includes the logo, name and menu.

After two years of being in business, Señor Sisig now operates a total of three food trucks, and can be spotted throughout many locations in San Francisco, including at SF State. Every other Tuesday, students can look forward to Filipino street food on their lunch break.

“I have been at SF State for two years now and I have joined the Señor Sisig bandwagon,” said dental graduate student Taran Cheema while waiting in line at the food truck next to Hensill Hall. “The line is usually long, but it has always been worth the wait.”