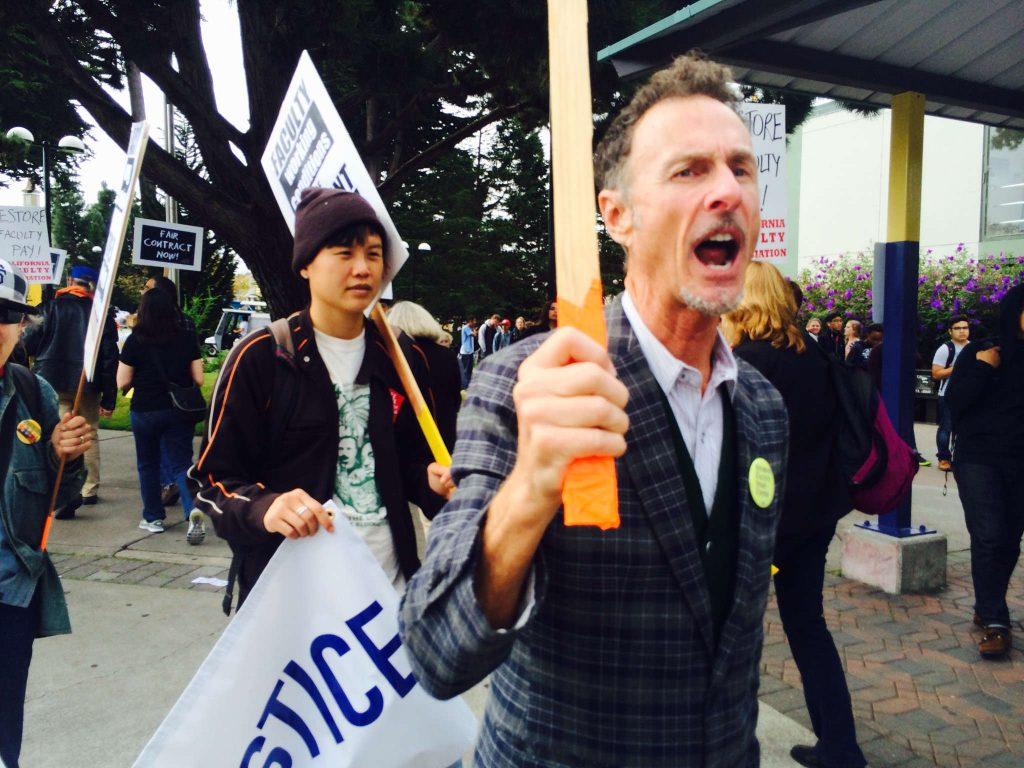 Michael Ritter marches and chants in a picket line in front of SF State Tuesday, Oct. 7, 2014. Students and faculty members gathered at the corner of 19th and Holloway avenues occupying part of the campus entrance.

SF State faculty marched along the corner of Holloway and 19th Avenue today, marking the 99th day without a new labor contract. Students and other organizations joined the California Faculty Association’s picket line in solidarity.

“Their working conditions are our learning conditions, and visa versa,” said SF State student and Students for Quality Education intern Larica Fantasia Jacko. “This is a matter of sticking together.”

Faculty have worked under an expired contract since July, prompting the CFA to stage demonstrations throughout California State University campuses this week. The CFA hopes to establish a new contract with salary increases to better assist faculty members dealing with high costs of living.

“We don’t believe that the chancellor and the Board of Trustees are negotiating with us fairly,” ethnic studies professor and CFA Chapter Student Chair Philip Klasky said. “Faculty at this campus and all throughout 23 campuses in California have not received a raise since 2007.”

The issue of workload is also still under dispute. Many faculty members struggle to keep up with increasing class sizes without increasing pay. More students per teacher often means they have less time to devote to grading, advising and any other one-on-one interactions.

“Someone like myself who was teaching a class of maybe 30 or 35 students—now my classes have 45 to 50 students,” said Latino studies professor G. Alejandro Murguia. “So what they’ve done is actually add another teaching load to faculty, but without compensation.”

In addition to the marches, picket lines and other actions across CSU campuses this week, faculties are calling on their presidents to help in their efforts. At each campus, faculty will address their president via a letter to request support.

According to Klasky, SF State faculty delivered a stack of over 200 letters to President Wong’s office as part of today’s action. Some faculty members included personal accounts detailing how contract conditions have affected them.

“We’re asking him (Wong) to join us to recognize that the bread and butter of this university are the teachers.” Klasky said. “In my letter I explained to President Wong that I have not received an increase in pay in the last seven years and with the cost of living, I have actually received a pay cut.”

SF State faculty will wait to hear back from President Wong, according to CFA Chapter President Sheila Tully. The CFA will stage additional actions in the future if contract disputes aren’t settled.