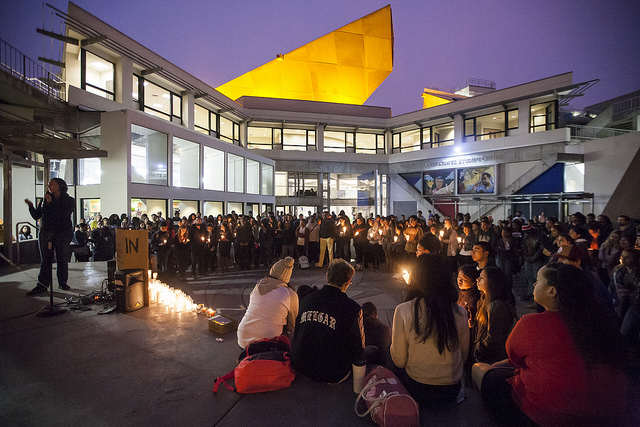 “I would’ve taken that bullet for him,” Aaron Tomlin, Madden’s uncle, said on the brink of tears to the crowd at the memorial service. “I love that dude. Thank you for coming out here. Showing up for us, that’s everything.”

Madden, 20, died from gunshot wounds last Friday on the front doorstep of his uncle’s East Palo Alto home, according to police.

Marquis Madden, the father of the deceased, told mourners that a four-year-old Madden had urged his father to stop and empty his car and pockets of small change to give to the homeless in San Francisco, teaching him the value of giving to the less fortunate.

“He was very determined to go out and be better,” said Anika Carter, who organized the vigil for Madden. “Someone I barely knew had such an impact on me.”

Although she knew him for only a month, working with the late biology student at a University tutoring service, Carter told the crowd that she was inspired by his ambitions to become a doctor and get out of East Palo Alto.

“Things like this stick with us,” said Armando Maciel Jr., who came to know Madden as a brother. “But we just gotta keep pushing. For him, because that’s what he wanted in life. I’ll never forget this. I love you Quack.”

Family and friends affectionately referred to Madden as “Quack,” they said, because he grew up looking like a duck.

Maciel told the crowd filling into Malcolm X Plaza to look up to Madden as an example of how to live their lives, and to not let the sadness of his end stop their ambitions.

Donallen Stevenson III, a former resident assistant at Mary Ward Hall, saw him on occasion when Madden visited a friend during his freshman year. Although he described Madden as a “knucklehead,” Stevenson remembers him as a smart and joyful young man. The two often debated on the topic of religion whenever they were together, but no matter their philosophies, were always on friendly terms, Stevenson said.

“The fact that this happened to him is hard to absorb,” said Ashley Jenkinson, Madden’s former mentor in SF State’s Summer Science Institute. “He was just an incredible individual, and he will be missed.”

All services will be held at Skylawn Memorial Park, Highway 92 at Skyline Boulevard in San Mateo, Calif.