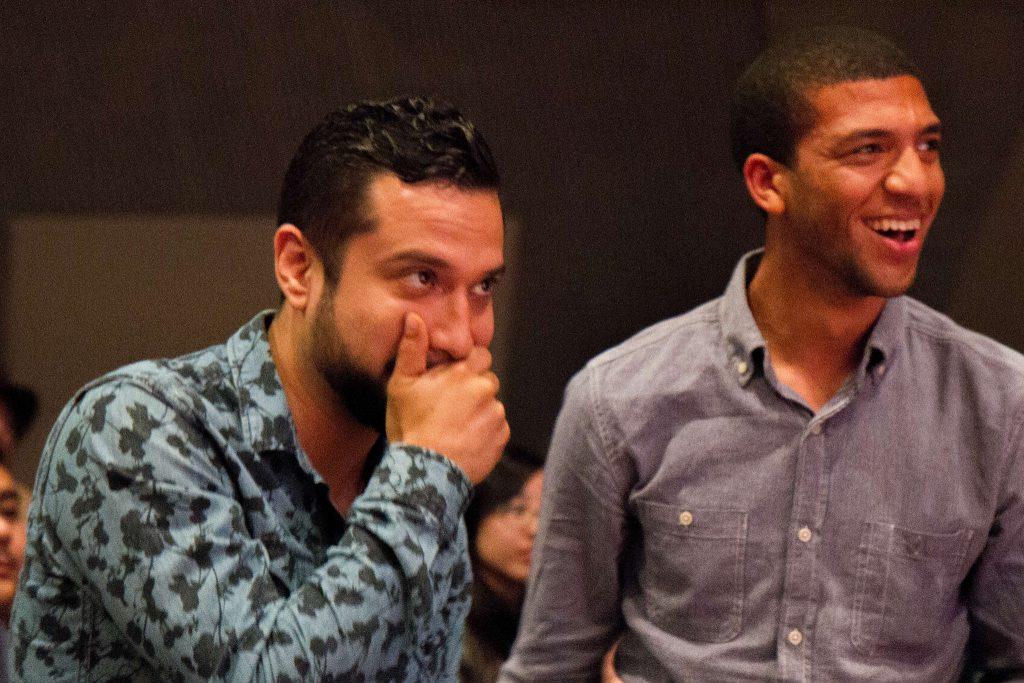 Xavier Galinro and Don Allen Stevenson III, actor and director of the film "Change," celebrate their Jury Award and being selected as Campus Finalists at Campus MovieFest SF State on Thursday, Oct. 9, 2014, in Jack Adams Hall in the Cesar Chavez Student Center. The film is one of four at SF State that will go on to be screened in Hollywood.

Hannah Mullins
Xavier Galindo and co-director Don Allen Stevenson III thought they wouldn’t be able to premiere their first film together after encountering issues with lawyers and consent forms from actors. To their surprise, a jury of faculty and peers from SF State awarded them with an invitation to Hollywood to screen their film in front of thousands of students from across the nation.

Galindo and Stevenson were one of 119 teams that entered their films into the 2014 Campus MovieFest competition. Each team was provided with equipment to make a film and just seven days to produce it.

Only 16 films were showcased at the finale October 9 in the Cesar Chavez Student Center and only four of those teams were selected for the Jury Award and an invitation to go to Hollywood for CMF’s summit event. From there each student is entered in a chance to win invitations to the Cannes Film Festival in France.

Galindo and Stevenson are both Broadcast and Electronic Media Arts majors and this was their first time entering a piece in CMF. Their film “Change” showed the gentrification of the Tenderloin district and how one native stands up for the place he grew up in. The duo wanted to address how the community and victims of poverty are disrespected in their own neighborhood where they once flourished.

“It was the merge of technology and poverty that encouraged me and I wanted to create a film that brought all of those issues up,” Galindo said. He had heard about the festival and instantly went to the drawing board, writing his script in one day and approaching Stevenson to see if he was interested in working together.

“I got his email and read his script and I was actually moved by it immediately. I thought ‘Whoa, this is a little bit different,’” Stevenson said. “This was something serious and emotional and it had a powerful meaning and value behind it that I could stand on. That’s a wonderful thing we should be talking about. More people should see this, more people should be aware of this.”

Another group of fellow students were shocked when the emcees called out their film as one of the final four. “Roxie,” created by Traiffe Films, was a clever spin-off of a classic movie. Their small cast acted out a phone conversation of a man who had taken his date to see Roxie.  Roxie remains a mystery, but viewers can see the character is someone fun, outgoing and clearly a part of the man and woman’s relationship.

The crew consisted of Vikram Valluri, Kurtis Tautscher and Chris Haynes, who spent a good amount of time coming up with the idea.

“It was loosely inspired by the film “Saturday Night Fever,” like the opening intro, but it was a collaboration between all of us and a whole bunch of great people got in a room and, for hours on end, thought of what we could do,” Tautscher said. This is Tautscher’s second time going to Hollywood, but his colleague Valluri’s first.

The group met many obstacles while filming their short on the streets of San Francisco and the neighborhood near the Roxie Theater. They had planned to shoot in a barbershop with customers but were denied access at the last minute; the team still came out on top without following their original script. The film’s colorful costumes and witty sense of humor are just a few of the things that are now allowing the crew to go to Hollywood along with fellow winners, “Bored Games” by Eden Alcomendas’ crew and “Steakout” created by the Bay Area Natives, who all exited the building in a cloud of ecstatic screams about their success.

Many of CMF’s past participants, including West Coast Promotions Manager Ty Besh,  have received a Jury Award and traveled to Hollywood.

“Student teams find their own way to France and Hollywood but many schools support the students’ trip,” Besh said. “Also, CMF provides an all-access pass to the Cannes Film Festival.”

SF State is one of the first 10 schools to participate in CMF this year and the festival will continue to travel across the nation until May 2015. Come June, each university’s winners will gather in Hollywood for the opportunity of a lifetime and a chance to have thousands of viewers see their films.