Feminism for Bros workshop redefines theory as all gender-variant 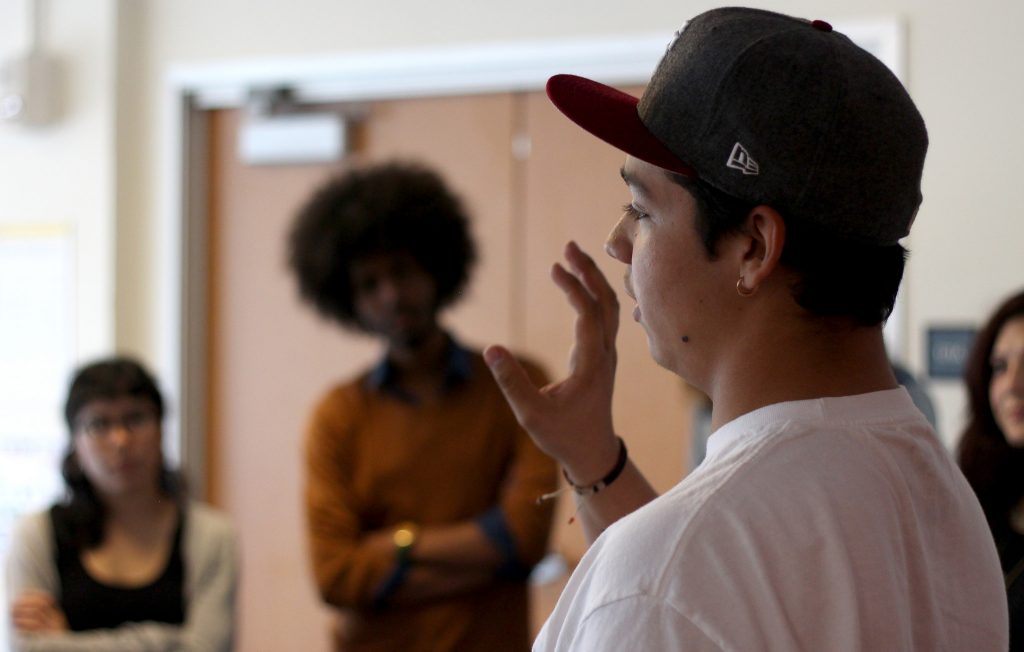 Ahkeel Mestayer (front right) participates in an exercise during the "Feminism for Bros" event at J. Paul Leonard Library in San Francisco, Calif. on Wednesday, Oct. 15, 2014.

A discussion-based workshop titled “Feminism For Bros” invited all genders to redefine what it means to be a feminist and joined the gender inequity conversation at SF State yesterday.

“There are negative stigmas to feminism and we want to start or continue that struggle to dispel them,” said moderator Mazin Jamal. “It‘s not just a national thing, it’s a global thing. It’s an evolutionary thing. It’s humans getting past these misconceptions that are slowing us down from reaching our potential and connecting with each other.”

Jamal and co-host Rachel Newsome of the Student Union of San Francisco said modern feminism is considered a controversial term, often associated with hating men. The hosts’ goal was to get males, or “bros”, involved in the discourse too, and prove that all types of people can be feminists.

“A lot of men might think ‘ah they’re just going to hate on us again’, you know, male bashing,” Newsome said. “That is not what we’re about. We are about equity and equality.”

The workshop focused on multiple gender perspectives and created a safe space for men and women to talk about what feminism means to them. Members of the group shared personal stories and experiences as they considered different definitions of equity, equality, power and privilege.

One attendant, Tom Relling, was inspired by his girlfriend to join the workshop and learn more about feminism.

“Some of the other members of the group did a good job coming up with analogies and definitions that helped me understand a little bit better how these things apply in my own life,” Relling said. “I think it’s up to people our age to really embrace feminism.”

The event ended with a game that invited participants to stand on either side of a line on the ground depending on their response to yes and no questions. The last question, “Do you consider yourself a feminist?” brought all members of the group to the ‘yes‘ side.

Yesterday’s workshop is a part of the series of teach-ins hosted this month by the Student Union of San Francisco. Jamal and Newsome hoped to provide people with discussion tools so they can continue the conversation in the community.

“I think SF State has it better than most,” Jamal said. “But even here there‘s always a need to build on the dialogue.”