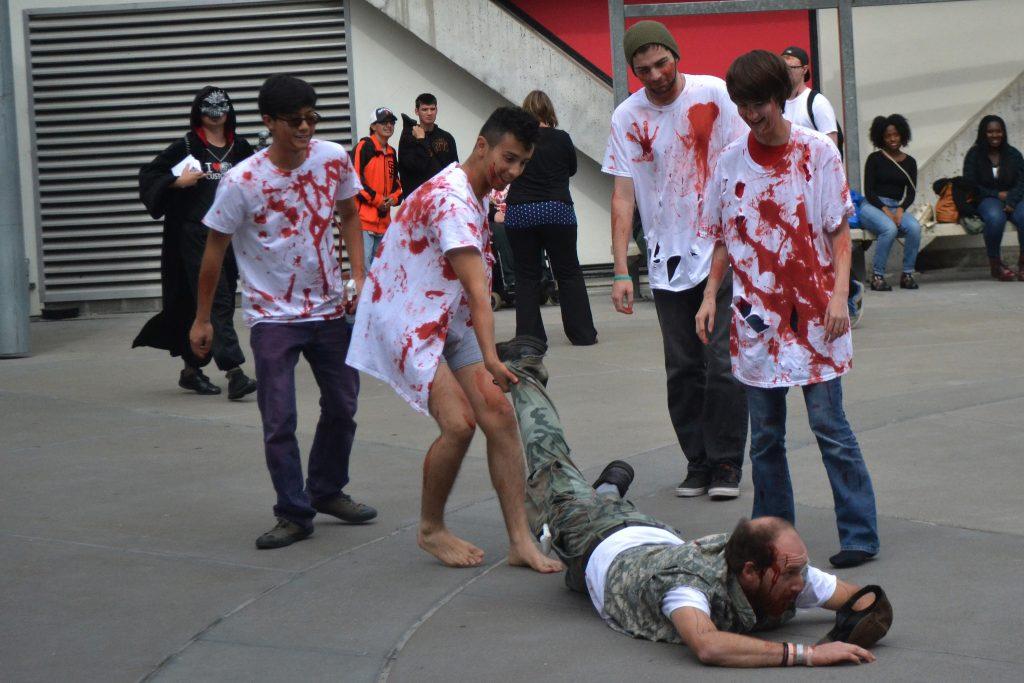 Thursday, Oct. 16, 2014, SF State improv troupe, Zombie Nation teamed up with Neighborhood Emergency Response Team volunteers to spread earthquake safety awareness at this year's Quake in the Quad. Here, the zombies pretend to rise from the dead, after apparently dying in an earthquake, due to not following safety protocol.

The living dead made an appearance in the quad yesterday, falling victim to the ground-shaking “Stop, Drop and Hold On” drill for the next big earthquake.

As part of the annual “Great California Shakeout”– now with global participation — the Office of Emergency Preparedness scheduled an earthquake drill at noon Thursday in the Malcolm X Plaza. Since 2008, when the annual action was established, around 10 million people have participated in earthquake drills across California, including more than 415,00 participants in San Francisco, according to Shakeout, the organization that started the event.

“I don’t know about you, Abe, but I’m feeling the ground wiggling a little bit,” said emergency preparedness coordinator Gayle Orr-Smith as she shook, initiating the event by simulating the beginning of an earthquake.

SF State’s “Quake the Quad” earthquake drill lasted roughly half an hour, and once the “trembling” stopped, UPD Sgt. Abraham Leal and Orr-Smith called out to the quad for any survivors. Seven zombies from Improv Nation, an improvised comedy student group, slowly sprang up.

“See, they did not ‘cover, drop and hold on’!” yelled Orr-Smit and Leal.

AJ Beck, one of the zombies who performed in the quad, said Improv Nation hosts their “Zombie Apocalypse” event every year, but this year they teamed with the Office of Emergency Preparedness to promote earthquake safety and their organization, which attracts new members through the act.

“Usually we just come out as zombies, this time we were able to die, so that was really fun, to have people see our death,” said Beck.

After the zombies rose in the quad to Michael Jackson’s “Thriller”, they made their way through the University in blood-stained rags. Orr-Smith and Leal used this transition to launch into a talk about earthquake safety and disaster emergency preparation.

They called a UPD volunteer to demonstrate a technique called “Stop, Drop and Hold On,” which, according to emergency management experts, is the appropriate way to avoid injury and death during an earthquake.

“The most important thing during an earthquake is to protect your head and neck,” said Leal, explaining that injuries to other parts of the body won’t impair a person’s ability to call for help, but an impact to the head and neck will make one lose consciousness.

“We’ve learned that most people are injured when they’re entering or leaving a building during an earthquake,” added Orr-Smith.

Reflecting the commuter aspect of the campus community, Orr-Smith said people who are caught driving during an earthquake should pull away from the road where there is no overpass or electrical wires nearby. Likewise, if a person is stuck in a moving train, passengers should stop and take cover when the conductor brings the train to a halt, said Orr-Smith.

For people with disabilities, such as wheelchair users, she advised people to lock their wheelchairs in place and take cover against a wall. The event stirred up a discussion, prompting people to ask questions to the emergency preparedness experts.

Environmental studies major Imani Davis moved from Sacramento to San Francisco three months ago and said she slept through the 6.0 magnitude Napa earthquake on Aug. 24. She said she didn’t feel prepared to respond to an earthquake emergency.

Davis said drills are crucial and that there should be more. “It gives people a tangible experience of how it should run, because everything in theory is much different than when crowds of people are coming out of buildings,” said the 22-year-old student.

As Orr-Smith and Leal concluded the earthquake simulation, they told attendees to prepare for when an actual earthquake strikes.

“Seismic experts, though, do tell us that we are overdue as they look at the history of earthquakes in this region. It looks like we should have had some more from now since 25 years ago,” said Orr-Smith.