Music and Giants fans celebrate together at the Depot 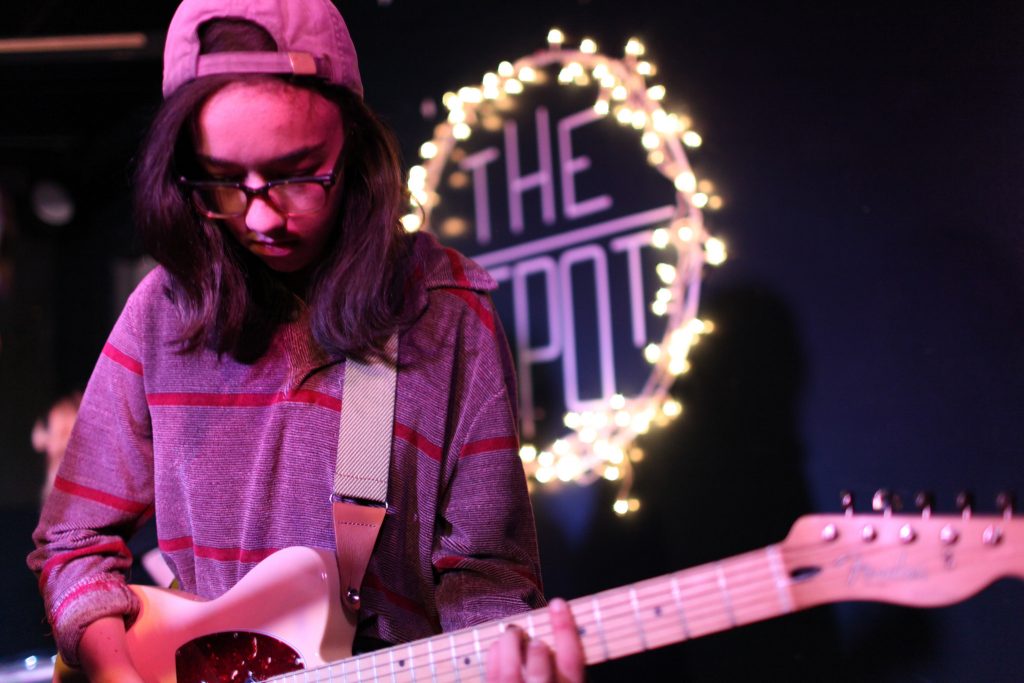 Eva Treadway plays with her band, Big Range and the Rangers at The Depot on Thursday, Oct. 16, 2014..

The room took an hour to fill up completely as people filtered in from the pub to see what all the music was about. The first band, Big Range and the Rangers, enjoyed a modest crowd that gathered close to the four-person band. Groups of friends in the crowd reached out to each other and nodded along during the set, while Giants fans at the pub could be heard clapping and yelling.

“It was cool. I had a good time, and it sounded good,” said Kyle Labaro, bassist for Big Range and the Rangers. “We expected nothing, so we got more than that, I suppose.”

The band played a four-song set and then traded off with Jet Trash, a charismatic four-person group from San Francisco.

Onlookers started to loosen up as the room filled, but the majority of the people watching the show were dedicated listeners without much movement. Jet Trash was fast-paced and intense, and maintained friendly communication with the crowd, including a request for the baseball score.

“We write tunes that we enjoy playing, but we also want everyone to have as much fun as we have,” said Marshall Fassino, one of the band’s bassists and vocalists. “When things get too involved or too complicated, sometimes you risk turning and audience off. This is rock n’ roll, not rocket science. If people can’t move around and get a little crazy, what’s the point?”

Fassino stopped to talk to the crowd a few times during their set, which only boosted the audience’s excitement. Onlookers at The Depot were whipped up into a frenzy by the end of the night by the constant explosions of noise from the pub. By the second song of GRMLN’s set—the last group of the night—there was a mosh pit, multiple crowd surfers, people standing on tables and someone waving a skateboard above the crowd.

Jimmy Ng, an anthropology major, came with a friend to scope out the show. “I’m just here to get the vibe at SF State,” Ng said. “I always like up-and-coming bands and independent artists. I think it’s really cool that they come out here.”

Amid yells of encouragement and cheers, Hot Flash Heat Wave jumped right into their set next, thanked the crowd for coming and addressed familiar faces from the show they played on campus last month. Audience members seemed to have grown their dancing legs and received the fast-paced, playful band with loud enthusiasm.

GRMLN closed off the night with a high-energy set that matched the explosive energy of the elated Giants fans next door. Students grabbed friends and danced freely from the pub and into GRMLN’s crowd, and then back again. Many stayed, however, filling the venue to apparent capacity and proving the night to be a win-win for fans of the game and the music.