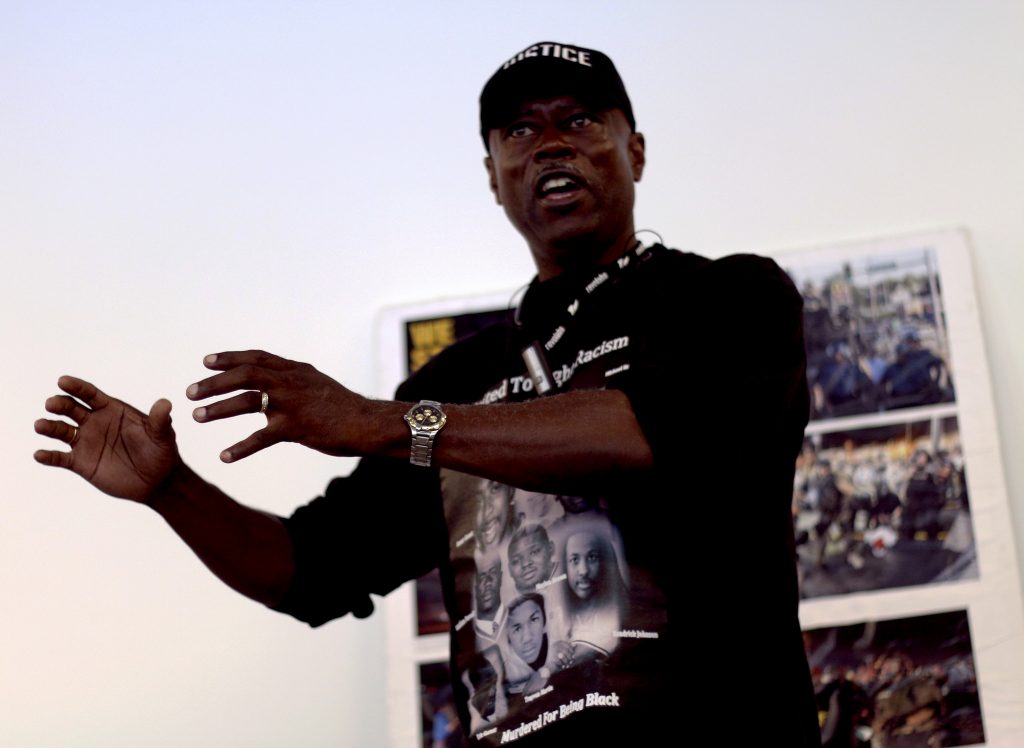 Cephus Johnson, SF State alumni and the founder of the Oscar Grant Foundation speaks to students about his nephew's death and about student activism against police brutality and police shootings at the J. Paul Leonard Library in the event room, 121 at SF State, Wednesday, Oct. 15, 2014.

Oscar Grant’s uncle spoke to students at SF State Wednesday and led a pledge to stand up against police brutality, which he said is increasing for young men of color.

“The murder of my nephew Oscar really allowed me to begin analyzing this society as a whole,” Cephus Johnson, Grant’s uncle, said at the event. “I looked at the pains that young black men, specifically, as well as brown and poor white people are experiencing when it comes to police brutality in this country.”

Johnson traveled to SF State to share with students the need for activism in society. At J. Paul Leonard Library, he and fellow activist Joey Johnson spoke to students about their recent trip to Ferguson Missouri, where more recently the unarmed African-American teenager Michael Brown was fatally shot by an officer, sparking the controversial topic of police brutality across the country.

“This has to stop,” Joey Johnson said. “What’s going on in this country is a slow genocide that is gaining momentum, and if it’s not stopped it’s going to get worse.”

The San Francisco Student Union put together the event with the goal of inspiring students to take action, according to member and organizer Mazin Jamal.

“It’s often that we learn about these things and now we really start to see the truth and how horrible the reality of our system is, it can be very disempowering,” Jamal said. “But what Ferguson proves is that when we do something, things do happen.”

Johnson described the pain he and other protesters went through while in Ferguson as appalling. Helicopters, German shepherds, armored vehicles, snipers and double agents are just a few strategies unleashed on protesters, according to Johnson.

“You would have thought they were getting ready to go to war,” he said.

Broadcasting and Electronic Communications Arts student Hanna Wodaje felt the workshop was helpful and inspiring. “Sometimes you feel helpless with all these people dying,” she said. “With events like this, it lets students know what they can do and what their rights are.”

The event inspired students like Onyeomachi Okoro, a kinesiology major, to want to take action.

“Hearing about this makes me angry,” said Okoro. “I don’t want to sit by myself and just be angry. I want to get out and do something.”

We have to erect a giant stop sign to the genocide, mass incarceration, police terror and criminalization of a generation, said Joey Johnson. “This shit has got to be rocked back on its heels,” he said.

Johnson said that the spirit he felt from the youth in Ferguson was unlike any he’d experienced. “Right now our society is dependant on this generation to rise up, take leadership, and bring in a new society where we all can get justice, respect, and freedom,” he said.