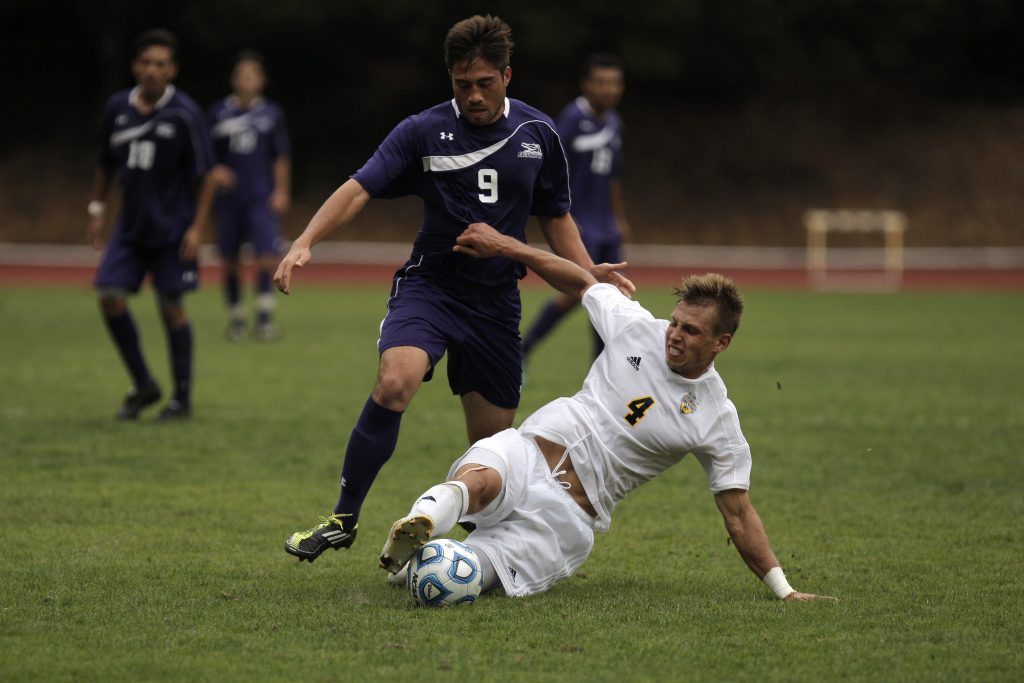 “It’s just a big relief,” said head coach Matt Barnes. “I don’t think people realize how hard it is to lose five games in a row and then have this type of energy and that type of performance today. I was really impressed.”

The aggression and energy were manifested through the early first-half attacks, and shirt tugging from the Tritons. However, this didn’t beat down the Gators as the team gained control of the game in the middle of the first-half, but missed six shots on goal.

Right when it seemed that the teams would head into the locker room with a scoreless first-half, the Gators came out and attacked.

It was in the 38th minute when Gators’ substitute, Matias Rodriguez, made a quick cross to Kevin Johnson who scored a soaring shot into the Triton’s net, giving the Gators a 1-0 lead going into half-time.

“It started with Cameron along the right side and we had (Matias), who is a foot smaller than everyone else, get up ahead and was able to get that quick flick off,” Johnson said. “It kind of just slipped on the ground and landed on my foot. I saw the opportunity and went for it. (Matias) really was the one that put in the work for that shot.”

As the second-half rolled through, the Gators’ energy continued to stay high.

The tempo of the game changed after the Gators’ second goal. The Tritons began to attack the Gators’ net aggressively with four missed shots in the second-half.

Gators’ goalkeeper Daniel Boyer saved three out of the four shots made by the Tritons while the Gators defense created a defensive wall stopping the Triton’s attacks.

“We pushed our numbers up as if we were down in the game,” defender Max Talbert said. “Our midfielders stayed back. We started to win the ball more and kept putting it upfield in the second-half.”

Pulling an important win after a harsh five game losing streak, was huge for a Gator squad looking to keep its playoff hopes alive. Barnes said, there’s always room for improvement, but it was getting out of this losing stump that proved the team was not going to give up on their season.

“Losing streaks are tough. When you’re playing well enough to win every game and you lose in double overtime twice combined with other tough loses, it feels really good to come out and get a win,” he said.

The Gators will return to action on Oct. 22 when they face off against off-league team University of Hawaii at HILO.