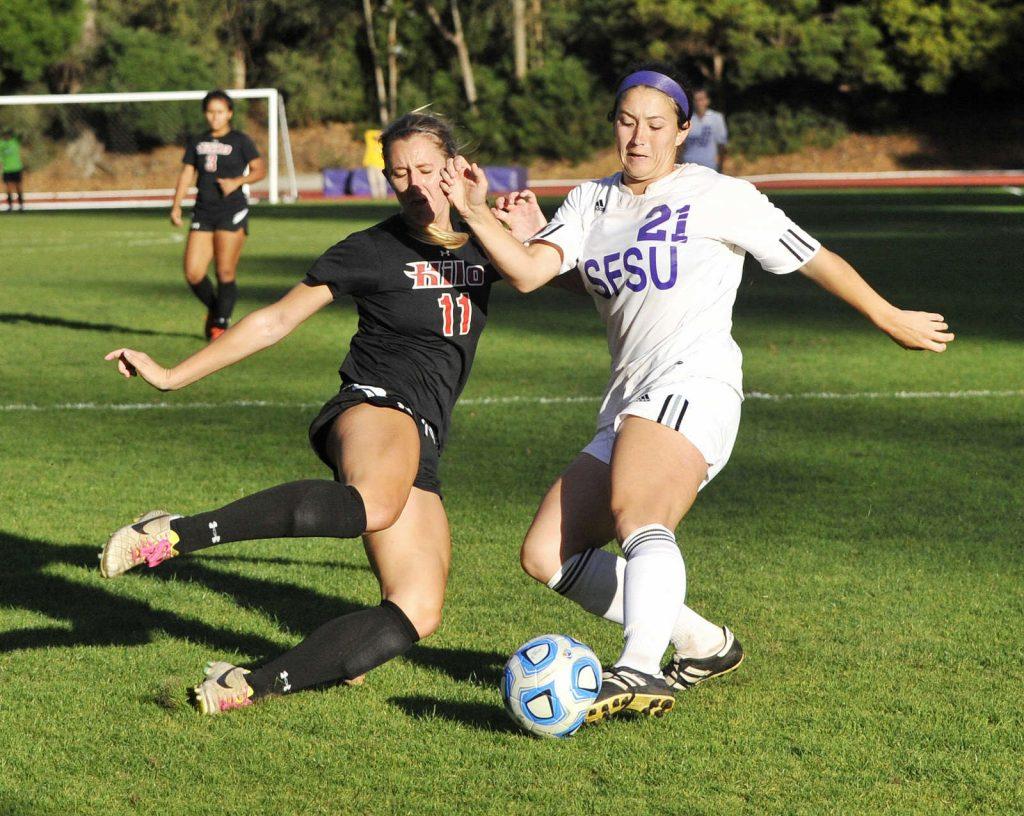 With the season dwindling down for the SF State women’s soccer team, the Gators have become accustomed to overtime matches, after a 0-0 draw with the Hawaii-Hilo Vulcans.

Wednesday’s finish marked the Gator’s third overtime game in a row, however it was not just a game between the Gators and Vulcans, but a commemoration and goodbye for head coach Jack Hyde, who plans to retire from coaching the SF State Gators after 35 years at the end of the season.

“It was absolutely brilliant because it was such a surprise,” said Hyde.  “I had no idea that anything was going on. It was just a big surprise.”

Coach Hyde received a standing ovation from a stadium filled with friends, colleagues and students of who cheered loudly. Four students in the stands came shirtless, only covered in painted purple letters that spelled out ‘Hyde.’

“I saw that, it was absolutely brilliant,” said Hyde.  “I’ve just been doing this (coaching), enjoying it and having fun with it.”

During the first half, the Gators came out with aggressive determination as they quickly took charge of the match. Midfielders Elizet Ceja and Rachel Arce ran all over the field, winning possession over balls that were lost.

The Gators had five shots on goal and one corner kick. Goalkeeper Allison Land only had two saves as the defense once again proved to be the anchor of the team.

“It’s obviously frustrating not to be able to score,” said Gator defender Stephanie Vanni, whose team managed to score only once in the last five matches. “All we can do is keep taking our chances and shots, one (goal) will come.”

The first chance to score was in the first half as forward Autumn Fox dribbled by left back Kassandra Talamantez, firing a pass to midfielder Rachel Arce who was unable to make contact with the ball.

“It’s really frustrating not to get a goal, especially because we had them during the first half,” Fox said. “Today we just didn’t capitalize.  We had about three crosses that were right near the box. The ball was just sailing across in front of the goal about three times.”

During the second half, SF State once again came out aggressive with forward Fox running 30 yards with the ball and setting midfielder Kelsey Wetzstein with a smooth pass across the penalty area, but Wetzstein was unable to capitalize as Vulcans goalkeeper Kayla Clarke stopped the laser shot headed for the net.

The match became physical during the second half when forward Ashley Borja-Roese was given a yellow card for a hard tackle on defender Sarah Guensler.

But despite the 10 shots on goal by the Gators in the second half, the team wasn’t able to score.

The Vulcans almost scored as Land kicked the ball nonchalantly in the box to a Vulcan player who was unable to capitalize on her mistake, and kicked it wide right.

During the overtime periods, the Gators pressed the action as several of them had opportunities to score on headers from corner kicks, but went over the goalkeeper’s head. The team had six shots on goal in overtime.

“It’s frustrating trying to get a goal,” said Hyde.  “But at least we didn’t lose on the big day.”

The Gators next match will be against the Chico State Wildcats at University Soccer Stadium Friday at 4:30 p.m.