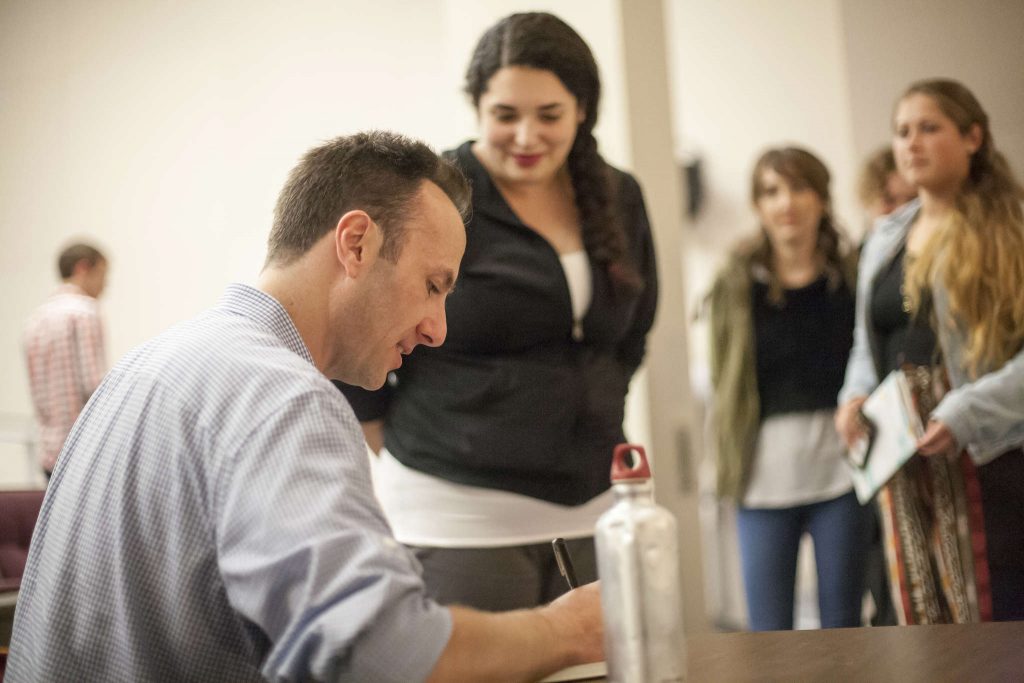 Author Don Waters signs a copy of his book for creative writing major Jessica Gonzalez, senior, after a lecture in the Humanities Auditorium Monday, Oct. 20, 2014.

Vivid depictions of the sprawling emptiness of the Southwest, drug smuggling and the importance of multi-generational friendships are what readers can expect from Don Waters’ new book “Sunland.”

Waters, a graduate of SF State’s creative writing program, read excerpts from his book to students last week. “Sunland” is the fictional story of Sid Dulaney, a man who decides to smuggle prescription drugs across the Mexican border to cut down costs for his grandmother’s medication.

The story is inspired by time Waters spent working at an elderly care facility in the East Bay, as well as his appreciation for nature and the contrasts between U.S. and Mexican border towns.

Waters told the audience that while writing the novel, he lived in Arizona and immersed himself in the culture of the Southwest.

He would drive up and down the roads along the fence separating the United States and Mexico, talking to border patrol agents, interacting with members of the Minutemen Project and hiking out into the desert with Humanitarians Without Borders.

“I wanted to show the reader and bring all of this to life,” Waters said. “This stuff was so alive in my head when I was writing (the book). I really felt it.”

The book includes deep, rich characters, and students were curious to know the inspiration behind them, such as the character of Epstein, who is an old man who befriends Sid and helps him with his tasks.

Waters said that while working at an elderly care center, he met a man who had a profound affect on him and inspired the character of Epstein.

“We had baseball in common,” Waters said. “He was a Los Angeles Dodgers fan, so we would talk about baseball. He was so dynamic. He was 100 percent himself. There was something really amazing about spending time with someone like that.”

This connection over baseball even made it into the book where Sid and Epstein are together for the last time as they sit and listen to the Arizona Diamondbacks game.

“Don’s heroes can be described as community-minded loners,” said Bob Glück, the host of the event.

After the reading, students’ questions ranged from the inspiration behind the characters to the publishing process, of which Waters admitted was a challenge.

“I had this big time New York agent who was submitting my book to all these big publishing companies,” he said. “They kept coming back rejected.”

After getting a new agent, Waters remembered his time working at a small independent press and decided to publish with University of Nevada Press, which he said was the right move.

“(The book) is right up my alley and the kind of writing I like,” he said. “It’s a dystopian, realistic portrayal of American life gone bad.”