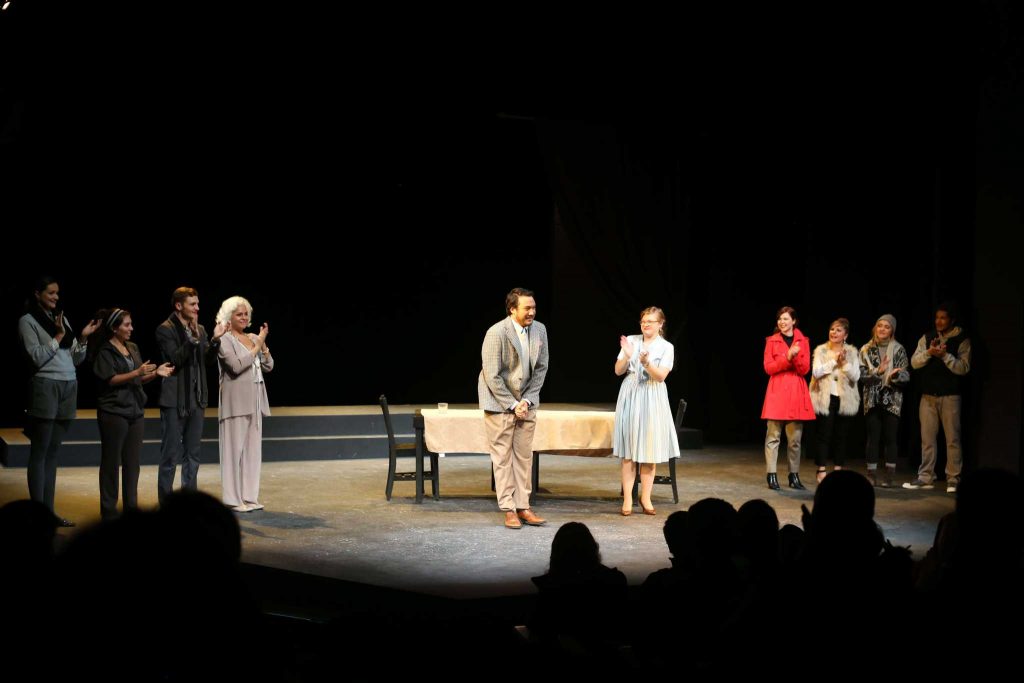 Hannah Mullins
A quiet café is where it all went down. A woman sat at a table addressing thank-you cards, when the bothersome buzz of a man’s cell phone begins. This new age comedy tells the tragic tale of a man with loose ends.

“Dead Man’s Cell Phone” was the first theater production of the semester at SF State and attracted a large audience in Little Theatre Oct. 21. The play, which ended five days later, was written by Sarah Ruhl, one of the most prominent playwrights at the moment, according to Roy Conboy, the director of the play.

Conboy, a playwright professor at SF State, has directed for almost 40 years and likes to look at each of his plays as a tricky project made of people.

“I like the play a lot, I think it’s really interesting,” Conboy said. “It’s kind of a puzzle so it was an adventure to figure out how it works and I like that about it.”

As two tables sat in the middle of the stage, the lights illuminated a modern day setting with a vintage feel. Jean, the main woman, strives for love in her old fashioned ways, showing how obsessed society is with technology and the lost art of human interaction.

“It felt pretty unbelievable, I’m still a little bit in shock, and it all feels like a dream,” said Lauren Prentiss, the spunky 19 year old who played Jean. Prentiss walked out after the show in a vibrant green dress with a contagious smile and was greeted with cheers and applause.

“It’s been an absolute wonderful experience,” she said. “My first main stage, so I’d say I’ve been spoiled.”

Heather Bridgman, a 21-year-old theater major, played the character of Mrs. Gottlieb, a lost soul who knows no love but that of her affection toward her now dead son. Bridgman jumped at the chance to play such a charismatic role.

“I’ve worked with Roy in the past and I was keeping really up-to-date with his next project because I enjoyed the last project,” she said, “So I hopped on board and we had a series of auditions and callbacks.”

Jessica Bent is in her final semester at SF State and took the opportunity to be the lighting designer for “Dead Man’s Cell Phone.”

“It gives a lot of dimension for lighting, and there’s not a lot of set design, so it’s really interesting and hard and I really wanted that,” Bent said. “Something to really push me in lighting.”

Lighting for the show was a lot of work for Bent, as she drafted and designed on paper to give the play a noir feeling through colors and focus.

“I just think theater, as a whole, has kind of lost its realm,” she said. “I think being able to come to these shows at State and see what we actually do and how much hard work we put in to this, I think that’s the main thing I want people to realize.”

The outfits, makeup and lighting, which were owed to the work of the cast and crew, made the older woman behind Bridgman’s talent believable.

As the audience erupted in laughter and the play’s reign on stage came to an end, friends and family eagerly waited outside the theatre to congratulate their loved ones.

“I didn’t know it was a comedy, so it was surprisingly funny and I laughed a lot,” said Madison Zimmerman, a film major at SF State, while she eagerly waited to greet her friend Bridgman after the play.