From Hermione to Captain America, all battle in annual Costume Dodgeball Tournament 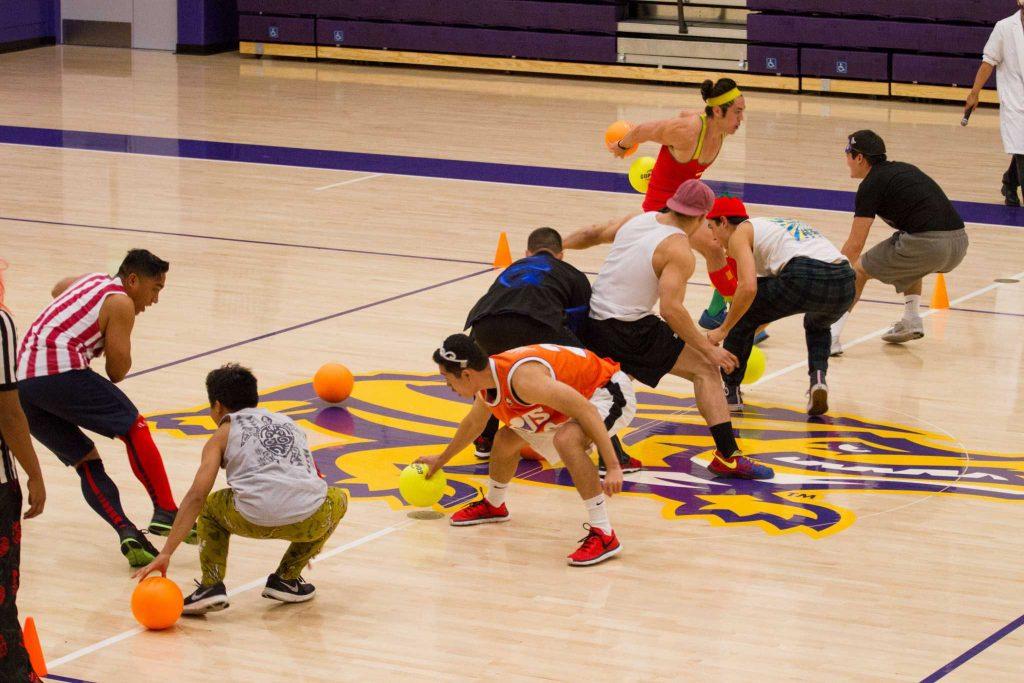 Teams Bobby "Small Hands" Medina and The Milkman go head to head at the beginning of the final round of SF State's Annual Costume Dodgeball Tournament from 7-10 p.m. Friday, Oct. 24, 2014, in the Gymnasium.

Dodgeball made its way to SF State Friday in tournament fashion, with the final round coming down to a friendly rivalry between teams Bobby Small Hands and The Milkman.

The fifth annual Costume Dodgeball Tournament came to a close in the championship game of a best of three set, where Bobby Small Hands claimed a heated victory over their rivals.

“We just want to beat Bobby really bad,” said Bobby Small Hands team captain Mike Cala of his friend Bobby, who played for The Milkman. His team had never participated in the event before and did not practice, he added.

Seven teams played in this year’s tournament in hopes of winning the championship title and best costume. The tournament started in 2010 and is open to all SF State students, according to Ryan Fetzer, assistant director of campus recreation.

“Students really seem to enjoy it and have fun dressing up,” said Fetzer. “It makes it more of a fun and social atmosphere.”

Out of the seven teams, only one had female players. Magic was a co-ed team whose costume theme was Harry Potter. Their creativity outshined the rest, and won the title of “Best Costume.” As a grand prize, each player on the team received a yellow SF State T-shirt, with the University’s new logo on it.

“I came for the good laughs and relationship building,” said Magic teammate Julia Ballou, an apparel design and merchandising student.

The bleachers were mostly filled with participating teams of SF State students. The crowd cheered for all teams while they danced along to a live DJ who played popular house music during the event.

In addition, members of Pi Kappa Phi came dressed in blue and yellow “Do it for the Bay” T-shirts. This was their third year participating in the tournament and they hoped to take the championship as they did in 2012.

“We’re confident in our skills, but we really just want to have fun,” said team captain Rafael Gallardo before the event. Gallardo’s team finished in sixth place this year.

Garrett Mason, player of The Milkman, said he was disappointed this year because it was played differently than previous tournaments. “It used to be best out of five games,” said Mason. “It will probably be the last year I play.”

When the dust settled, Fetzer deemed the event a success and said he looked forward to improving on it next year.

“Part of being a college student is building friendships and creating memorable experiences with one another that you will cherish beyond your time at SF State,” said Fetzer. “I hope we are helping to make that happen.”