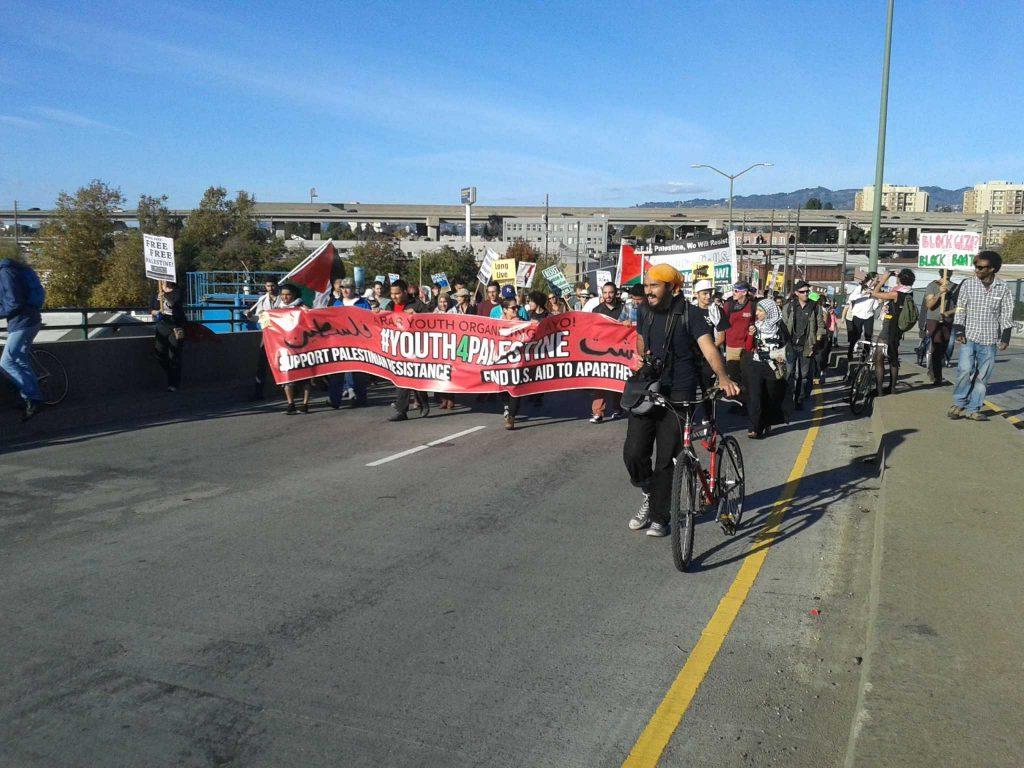 A crowd of pro-Palestinian protesters rallied last Sunday in West Oakland as part of continued efforts to deter the unloading of an Israel-based shipping line.

Participants at Block the Boat, the blockade event, initially prepared for the arrival of Zim Integrated Shipping Services Ltd., a major Israeli cargo company, at 5 a.m. Saturday. When the ship delayed its destination at the Port of Oakland, the organizers made a last minute call for supporters to rally at West Oakland BART station to keep discouraging the ship’s arrival.

The blockade of Zim shipping lines is part of a global strategy by pro-Palestine organizers to boycott Israeli products called the Boycott, Divestment and Sanctions movement which SF State’s General Union of Palestinian Students aligns itself with. According to the Palestinian BDS National Committee, participants pressure corporations to divest financial investments with Israel and sanction policies disapproving of Israel’s violation of international law.

Nearly 100 protesters assembled outside the BART Station at 3 p.m. Lara Kiswani, executive director of the Arab Resource and Organizing Center and one of the main event organizers, said she believes the ship continues to delay its arrival because of the protesters’ actions.

“Since our demonstrations have been so successful in showing community power and also the support of the workers in terms of honoring our picket, the ship itself, Zim, and the port of Oakland are realizing that it’s costly for them to continue to have them here,” Kiswani said.  “We’re trying to deter them further from even considering coming.”

She added that workers of the International Longshore and Warehouse Union have been working with protesters to prevent the ship from unloading its goods by choosing not to cross the picket lines.

An hour of speeches passed by before the crowd marched down 7th Street and turned at Mandela Parkway, chanting “Free, free Palestine. End, end the occupation.” The march concluded at the Port of Oakland where seven police cars waited for the crowd, though the demonstration remained peaceful.

At the port, several more spoke and established a pattern of solidarity between people in Palestine and those in Ferguson, Mo. protesting the death of Michael Brown.

“Now we have a lot of these issues that we see today, high policing and high militarization and high police brutality, and what are students doing?” said SF State GUPS President Lubna Morrar in preparation for Saturday’s rally. “We shouldn’t even be in classes. We really shouldn’t. We should be every day raising hell in the quad.”

While Morrar and GUPS members couldn’t show yesterday after the ship rerouted, California College of the Arts students held up signs that read “Art Students in Support of Palestine,” and other students from UC Santa Cruz arrived in Oakland after a three-hour bus ride.

“It’s important to be here now. We’re building momentum,” Miranda said. “We could very well be a week away from delivering a victory against the apartheid state of Israel.”

The event ended at about 6 p.m. with participants marching back to the West Oakland BART station. Kiswani said they expect the ship to arrive Tuesday and urged Sunday’s participants to stay tuned for future actions.

“We are prepared to fight for our dignity, for our self-determination, for all oppressed people! So stay on alert, keep close to your text messages, stay up on social media, call your friends and ask around,” Kiswani said.