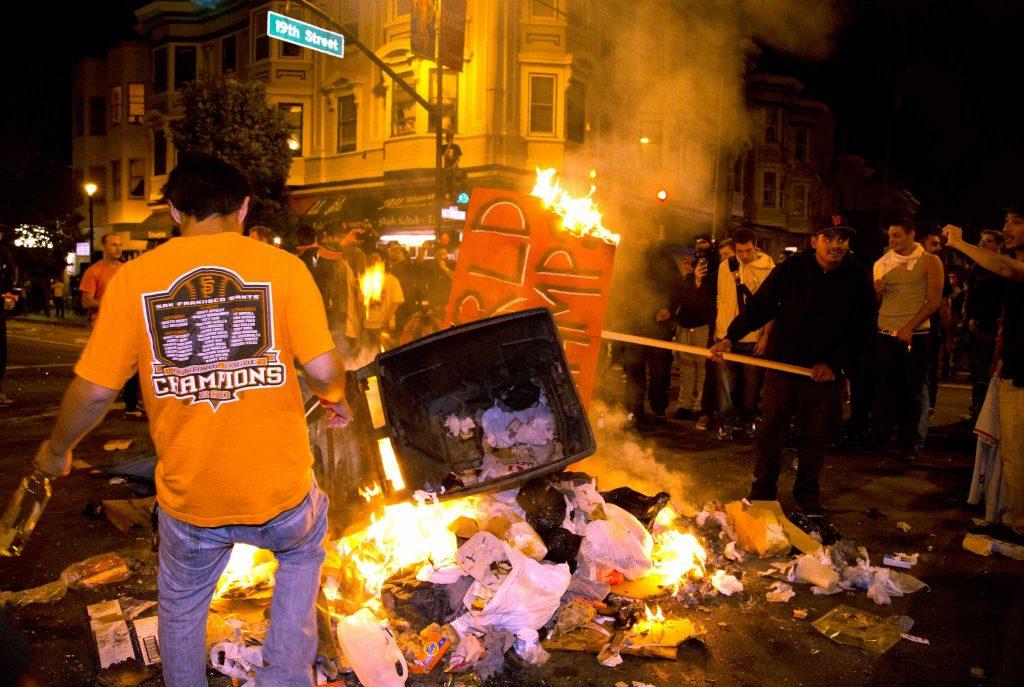 Fans in the downtown area of San Francisco upheld their tradition of marching from the Civic Center down towards the Embarcadero shortly after the Giants took their third World Series victory in five years. Certainly wary of how out of control past World Series celebrations have gotten, police on dirt bikes and in patrol cars lined Market Street at every turn, keeping chaos at bay for as long as possible.

Authorities could not hold back the chaos at Union Square forever, though. Hundreds gathered on either side of the street, flooding the sidewalk and the cable car turnaround before converging in the middle of the street and jumping around in ecstasy.

With traffic at a standstill, police eventually pushed the party east, only to see it converge around and on top of a Muni bus. Fans danced and posed for pictures while the helpless driver remained inside. One fan even hooked his sweatshirt around the livewire and swung from it like an zipliner.

After being pushed out again by the cops, the fans dispersed rather peacefully and marched for Third and King Streets, where AT&T Park stood dormant. Mid-Market saw virtually no damage when compared to the celebrations of 2010 and 2012, but across town in the Mission District, things were not so benign.

“The second we got off of BART we saw a fight break out,” Collins said. He and his friends rode to the 24th Street station, where they were immediately warned to stay off of Mission Street. Using backstreets and alleys, they navigated towards 16th Street, avoiding cops firing tear gas and fans lighting mid-street bonfires along the way.

“It was for sure out of hand,” Collins said. “Some of (the rioting) was a bummer, but the kids need to get hyphy.”

Police in riot gear blocked off sections of the neighborhood, doing what they could to diffuse violence while watching helplessly as nameless hooligans set fire to and defaced an entire neighborhood. Along with fights, graffiti and bonfires, two people were reportedly shot, both in the Mission.

There will be considerable cleanup ahead for San Francisco, as will there be another ticker tape shower. The World Series parade is slated for Halloween, Oct. 31 beginning at noon. The route will begin at Market and Steuart Streets and make its way down Market to the Civic Center Plaza.

Rain is in the forecast for Friday, but it shouldn’t put too much of a damper on the crowd. On this cool Autumn Thursday, the sun is shining on San Francisco: a city of champions once again.