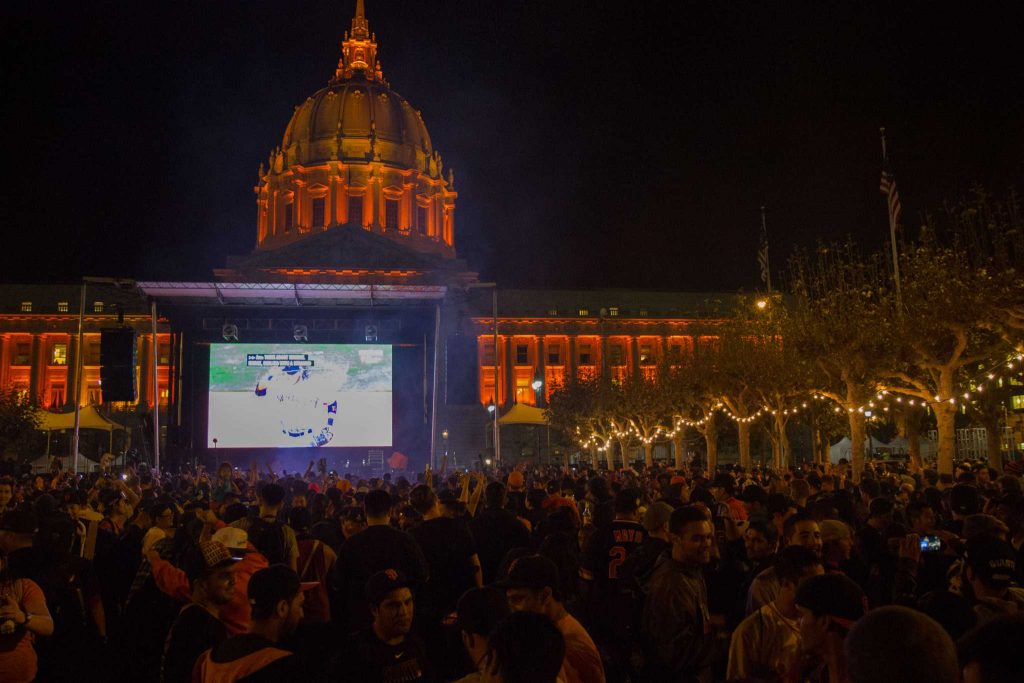 Fans celebrate the Giants victory during game seven of the World Series in the Civic Center Plaza in San Francisco, Calif., on Wednesday, October 29 2014. 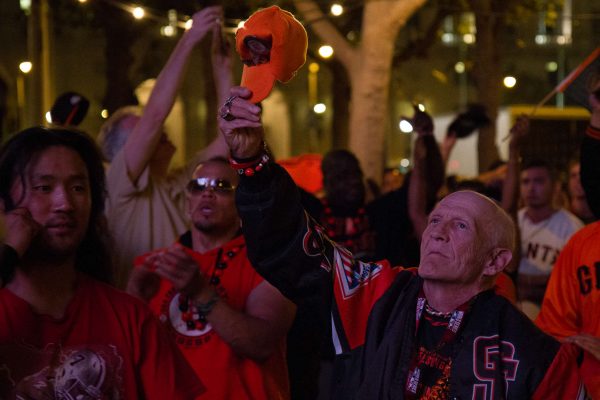 Howard “Crazy Legs” Rowe holds up his hat in honor of the performance of “God Bless America” during Game 7 of the World Series in the Civic Center Plaza in San Francisco, Calif. Wednesday, Oct. 29, 2014. Eric Gorman/Xpress.

For the third time in five years, the San Francisco Giants gave its city and fans a reason to celebrate Wednesday night by defeating the Kansas City Royals 3-2 in one of the most exhilarating World Series Game 7 victories the franchise has ever been a part of.

All Disney-style narratives were supposed to belong to the Giants’ veteran righty Tim Hudson, who was waiting 16 years to make it past the first round of the playoffs before signing with San Francisco in the 2014 offseason.

Hudson enjoyed a fairly quiet first inning and gathered two runs of support on sacrifice flies from Michael Morse and Brandon Crawford. But unfortunately for Hudson, his second and most pivotal start of this World Series fell apart quickly after that. The Royals started slapping the ball around on him and Manager Bruce Bochy sent Hudson back to the dugout after surrendering three hits and two earned runs in only 1.6 innings.

“I thought Hudson had some decent stuff tonight,” said Caden Reed, an urban studies major at SF State. “Unfortunately, the Royals have his number.”

It was Jeremy Affeldt — the veteran left-handed reliever whose career began in the Royals’ organization — that entered to do some very important mop-up work in the second and third innings, long before his usual late-game slot.

The middle of the Giants order struck again in the top of the fourth, breaking the tie and the tension for San Francisco fans. After Pablo Sandoval and Hunter Pence singled in back-to-back at bats, it was the big bat of Michael Morse that slapped a line drive to right, driving Sandoval home and pushing the score to 3-2. 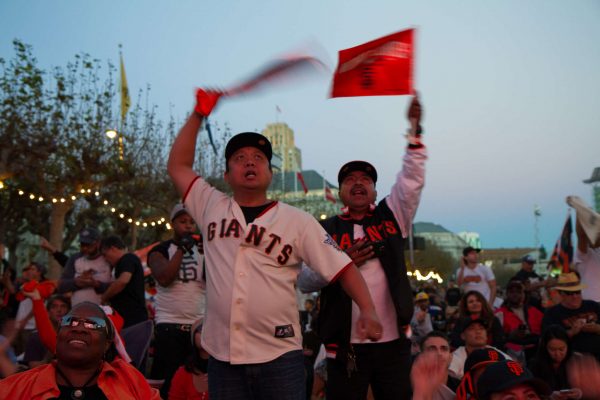 Although Affeldt remained on the mound for a quiet bottom of the fourth, his pitch count ticked higher as all eyes stayed on the Giants’ bullpen, anticipating the move every Giants fan hoped Bochy would make.

And then he made it.

Madison Bumgarner strode casually from the bullpen to the mound in the middle of the fifth inning, and whether the dizzied, intoxicated masses at the Civic Center or the 40,000-plus Royals faithfuls at Kauffman Stadium knew it or not, this World Series was over.

As is typical of Bumgarner, the big lefty was shaky early on but made a turnaround as the game wore on. He missed his pitch location early and gave up a single to Omar Infante, but seemed rejuvenated after Alcides Escobar bunted Infante over and sacrificed an out. He mowed the next two batters down, and then he took apart the eleven that followed them without allowing a single baserunner.

The Giants didn’t muster much of a threat against the Royals’ vaunted bullpen, but Bumgarner didn’t need it. The only scare in his outing came with two outs in the bottom of the ninth, when Alex Gordon drove a single to center that skipped past Gregor Blanco’s poorly played glove and Juan Perez’s equally poor support, allowing Gordon to break all the way to third.

For a moment it seemed like it would all unravel. The Giants’ ace had defied logic and all conventional wisdom when it comes to pitching, but Bumgarner falling apart with one out left in Game 7 of the World Series was a narrative that just wouldn’t do. In the end, it took him just a handful of pitches to get Salvador Perez — the only player to ever score a run off of him in his World Series career — to pop out into Pablo Sandoval’s glove and send San Francisco into their third World Championship in five years.

The view from the Civic Center

Thousands returned to the Civic Center to see how the final chapter of the 2014 Giants story would be written and they were not disappointed. This game had all the drama of a Hollywood blockbuster and awaiting Bumgarner’s emergence from the bullpen was like counting down the minutes until the first appearance of The Joker in “The Dark Knight.”

The crowd stood behind Hudson until they could not any longer, and cheered faithfully for Affeldt. But the main event was Bumgarner, and the lubricated masses at the Civic Center got more than they could ever ask for when their team’s best player emerged from the shadows.

They exploded when Fox showed him warming up in the bullpen, chanting “Mad-BUM” when he headed to the mound, and hung on every ball and masterful strike that he threw. Even in the post-steroid era of baseball, where offense rules the day and brings the ratings, San Francisco came to see a pitching performance Wednesday night, and Bumgarner delivered it.

“This is one of those nights I’m going to remember for the rest of my life,” said Aidan Collins. “The game was an anxiety attack and the vibe afterwards in the city was something else.”

Collins was one of the frenzied thousands that erupted at the sight of the final out, hugging strangers and being showered in champagne under the din of indecipherable screams. The Civic Center already resembled a giant concert, and those in the center of the action got treated to a joyous mosh pit of celebrating fans before flooding out into the streets of what would become an extremely raucous night in San Francisco.

Click here to read about riots in the San Francisco streets that followed shortly after.