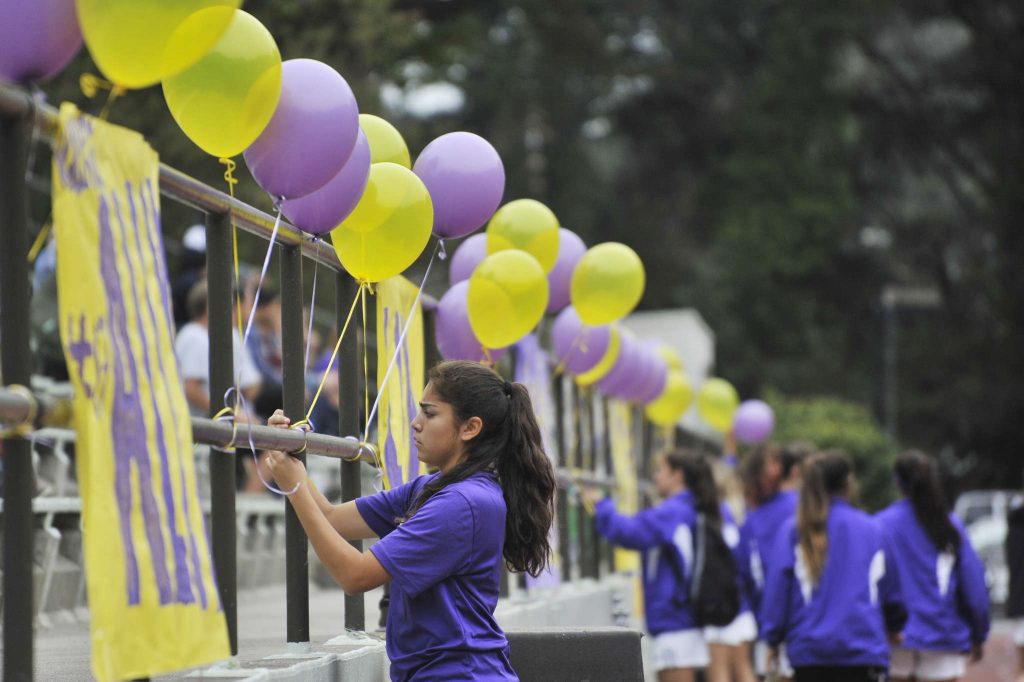 SF State Gators player Karla Uribe and the rest of the women's soccer team decorate the railing at Cox Stadium to honor their graduating players on their last game Thursday, Oct. 30, 2014.

In the final game of the season, SF State lost 3-2 to the Sonoma State Seawolves in a match that marked the last ever game for veteran coach Jack Hyde and for four seniors on the team.

Family and friends cheered aloud from the stands as Hyde, Allison Taylor, Allison Land, Ellie Ceja and Stephanie Vanni were introduced before the game. Yellow banners with the four seniors name’s were placed on the railing of the stands.

“It’s been 35 years of me being involved here,”said Hyde. “Thirty-five years seem like just five years. I’ve enjoyed every game. Today I felt we played well against Sonoma, but it just wasn’t to be right at the end.”

The Gators’ aggression was apparent from the first second of the game as midfielders Ceja and Danielle Vidal chased down every ball to gain possession of it.

The seniors’ presence was apparent in the first few minutes of the match as Ceja scored the first goal of the match off a soft floating header that seemed to be in air for an eternity. Defender Vanni assisted Ceja for the goal.

The Seawolves had several opportunities to score in the first half but were unable to capitalize.

Both teams displayed aggression as SF State had five shots on goal while Sonoma State had six, but the Gators went to halftime with a 1-0 lead over the Seawolves.

The Seawolves came out of halftime with an urgency as they fired an onslaught of shots toward Land’s goal.

Sonoma State’s first goal came off the strong right footer to the left corner of Land’s goal from defender Cecilia Sifuentes to equalize the score in the 57 minute mark. One minute later defender Marissa Marable took advantage of a mistake by the Gators defense, allowing her to score on a one-on-one play against Land.

SF State equalized the score with a free kick from Ceja and assistance from Vanni for a second goal. This was Ceja’s sixth goal of the season and last goal as a Gator.

“I don’t even know where to start, would’ve, could’ve, should’ve,” said Ceja. “Honestly that game was awesome, I don’t think we could’ve played any better. Everything we asked of our team, we got today.”

After a disputed match both teams went to overtime. Two minutes into the overtime midfielder Lauren Curtin was followed in the box by the Gators’ defense, awarding a penalty shot to the visiting team.  However, the Seawolves weren’t able to capitalize as Land blocked Curtin’s shot to the right.

However, the Gators would once again lose a hard-fought match in overtime as the Seawolves top scorer Curtis avenged her blocked penalty kick with a game-winner in the 102 minute mark.

“It was unfortunate what happened at the end,” said Vanni. “But this is how I would want my season to end, with these girls.  Each and everyone of us fought with all of our hearts on that field, and we couldn’t have asked for anything better.”

With today’s loss the Gators end its season at 7-9-2 without any possibility of qualifying into the playoffs.