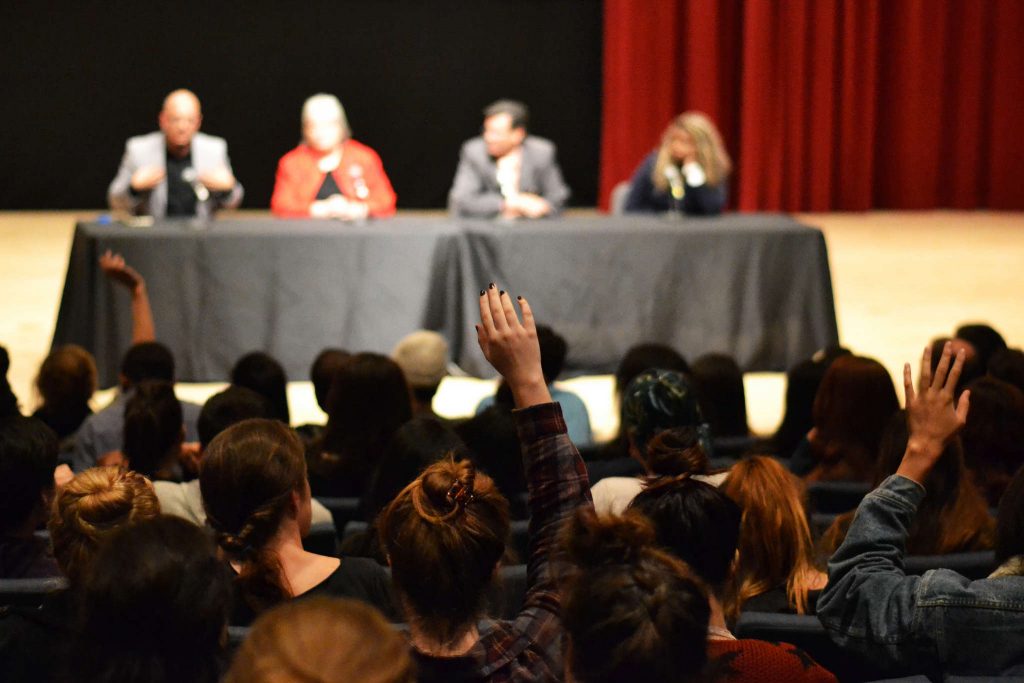 Monday, November 3, Students, parents and faculty gathered in Knuth Hall for to discuss the future of the dance department's studio FA203 Monday, Nov. 3, 2014.

Tensions ran high at the packed town hall meeting in Knuth Hall yesterday where the SF State community met to address the conversion of the Fine Arts dance studio into a campus museum.

“You’re taking away our church,” said dance major Becky Kalinowski. “(The dance studio) means that much to this program.”

Bernardi told the audience that McKenna Theatre was deemed suitable as a temporary dance space for Spring 2015 when it was viewed by faculty over the summer, but students were not convinced.

After much debate about safety concerns, which included McKenna Theatre’s uneven floors and cold temperatures, Interim Dean of the College of Liberal and Creative Arts Daniel Bernardi agreed to reevaluate the use of the theater as a temporary dance space for the Spring 2015 semester.

“These are legitimate issues,” Bernardi said. “I need to look at McKenna (Theatre) and evaluate safety concerns.

The LCA agreed to meet after dancers first received the news at the start of October that the studio in the Fine Arts Building room 203 would be converted into a museum.

“I should have had this meeting sooner,” Bernardi said. “That’s on me and I take full responsibility for that.”

The meeting featured a panel of associate deans Susan Shimanoff and Todd Roehrman, Director of the School of Music and Dance Dianthe Spencer and Bernardi.

The event had begun with a misunderstanding between students and Bernardi about when it started 20 minutes before schedule. According to the LCA website, the meeting was set at 6:30 p.m., which the dancers expected. Bernardi started the event at 6:10 p.m.

Bernardi said the consolidation of the LCA sprung from a lack of space in the other departments, including the science department.

“Science classes are being held in portables,” Bernardi said. “I saw an opportunity to free up space for science, while simultaneously consolidating the College of Liberal and Creative Arts. Many departments are going through changes, including a 25 to 30 percent reduction of the journalism department, not just dance.”

Dance students disagreed with the decision and expressed that they didn’t want to pay full tuition while not having access to two dedicated dance studios.

Another concern about the proposed space was that rehearsals would be pushed to the afternoon because of previously scheduled classes, according to dance instructor Wendy Diamond.

“McKenna (Theatre) holds classes in the morning,” Diamond said.  “Dancers need morning space. They need to be adequately warmed (up) by the time rehearsals start in the afternoon.”

Many rumors were circulating among dance students that lecture curriculum would be cut in half.  Bernardi dispelled those concerns when he said that in addition to the use of McKenna Theatre for rehearsals, classrooms that had previously been used as lecture classes would be available once again.

“I asked a question that was not answered adequately,” said Sadie Queally-Sammut, a music major. “He dodged questions.”

By the end of the two hour session, some students felt that Bernardi was still not sympathetic to their situation.

“Since I stayed here longer I’m reluctant to do a second meeting,” Bernardi said. “I’m not sure this was productive.”

Earlier in the day, dance students and supporters coordinated a flash mob in Malcolm X Plaza to draw attention to the event and garner signatures for a petition to urge the LCA to reconsider the conversion of the Fine Arts studio.

“We decided to do a flash mob, not only because we are dance majors,” said dance student Meagan Wells. “But to show (that dance) is something that is a part of our lives.”