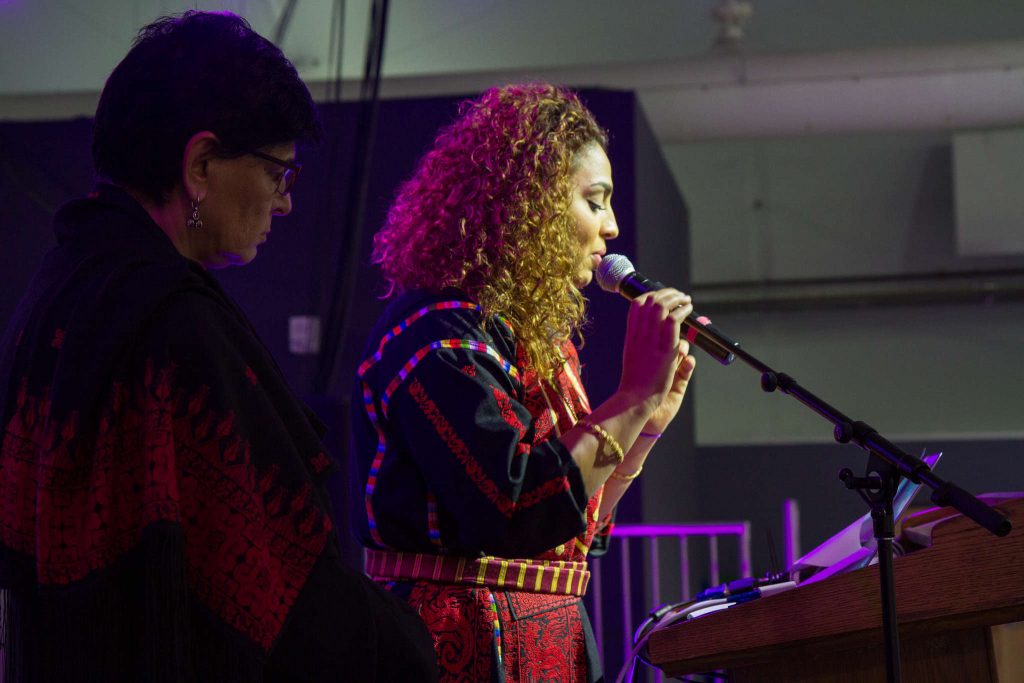 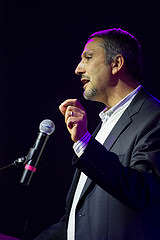 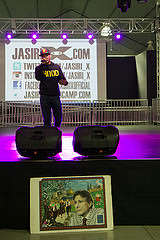 Rapper Jasiri X introduces himself onstage, with the image of Edward Said’s mural in the foreground, before his performance at the 7th Annual Edward Said Mural Celebration in the SF State Student Event Center Wednesday, Nov. 5, 2014. Eric Gorman/Xpress.

Students paraded with Palestinian flags at Malcolm X Plaza for the seventh annual celebration of a mural painted on the student center that features prominent Palestinian educator, writer, philosopher and activist Edward Said.

Members of the General Union of Palestine Students expressed their appreciation for the piece of cultural representation through song and dance at noon and continued the festivities during a banquet at the Student Life Events Center.

“He’s a really intelligent Palestinian,” said GUPS member and freshman Linda Ereikat. “We look up to him as college students for our future.”

Located above the bookstore entrance to the student center, the mural is considered the first of its kind at any university in the U.S., according to an SF State news brief from 2007. Debate over whether the mural represented controversial images slowed its creation, taking two years before it was completed in 2007.

Said is celebrated for deconstructing stereotypes and working for a peaceful solution to the Israeli-Palestinian conflict during the 1960s and 1970s. A myriad of other symbols in the mural represent peace, resilience and ties between Palestine and the United States.

“Not only are we here because of the historic event, like the Edward Said mural, but we’re here because we know that art and culture has a huge, huge role in terms of our resistance and our liberation,” said GUPS President Lubna Morrar. “That mural being put up is one of the most symbolic murals in the world, and especially in the United States.”

The celebration featured poetry from GUPS members and speeches from several Palestine supporters including Hatem Bazian, an SF State GUPS alumnus and professor at UC Berkeley. GUPS mentor and ethnic studies professor Rabab Abdulhadi also announced the creation of an Edward Said scholarship, which will be awarded to a student who stands for 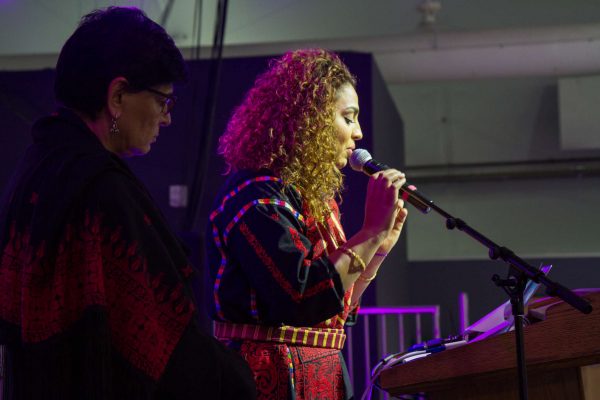 what Said accomplished in his lifetime.

The event’s headliner was hip-hop artist and activist Jasiri X, who joined the event in solidarity with GUPS. A recent trip to Palestine inspired his latest work, which references the checkpoints that restrict Palestinian movement.

“It was a life changing experience,” Jasiri said of his travels. “I mean, I thought I understood but it was so much worse. To see and experience it with your own eyes — it shook me.”

Following the political speeches and performances, the crowd danced, feasted and celebrated Palestinian culture together.

“We have events that are more political,” Ereikat said. “Today it’s about our culture.”