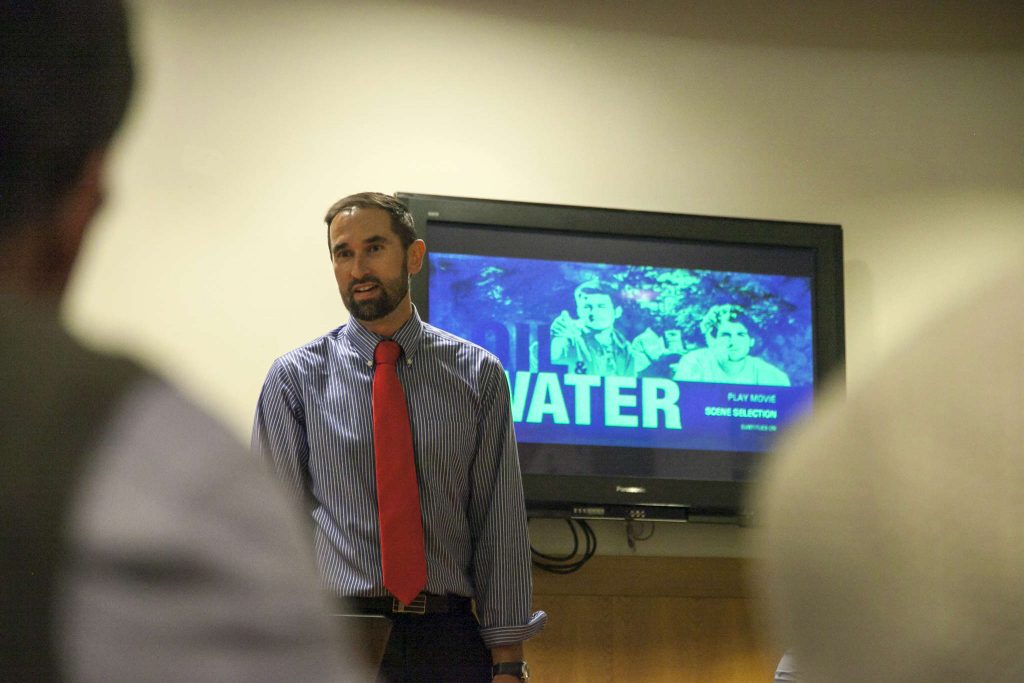 Assistant professor Jackson Wilson of the recreation, parks, and tourism department speaks to a crowd of students who came to see the documentary "Oil & Water" at the Richard Oakes Multicultural Center Wednesday, Nov. 5, 2014. Martin Bustamante/Xpress.

Students crammed together and others settled on the tile floor as a large crowd spilled into the hallway of the Cesar Chavez Student Center for the viewing of an environmental documentary and a discussion with Cofan tribal chief Randy Borman.

Laurel Spellman Smith and Francine Strickwerda put their hearts and souls into sharing the story of a national disaster through their documentary film “Oil &Water”. This eight-year-long production followed the footsteps of two young men seeking change for the indigenous people of Ecuador and the impact the oil companies had on the places these people once called home.

The story of two activists, Hugo Lucitante and David Poritz premiered Wednesday, Nov. 5, to an audience of students and faculty at SF State. Lucitante and Poritz had recently graduated high school and traveled to Ecuador to create a lifestyle around implementing change for an irreproachable community.

Located in the Northern region of the Ecuadorian Amazon, the men stayed with the Cofan tribe where it has resided for hundreds of years and where Lucitante grew up amid the start of a national disaster.

The oil industry had struck gold under the feet of others, and acted on motives the speakers considered had no concern for the indigenous tribes.

The village of Zabalo, where Lucitante’s family had built their life began to become polluted. The water, the food and the ground they walked on had become a toxic wasteland. Not wanting to leave their homes, the Cofan found a way to maneuver their way of living around the tragic devastation that oil has on their community.

According to Lucitante, the health of the tribe has plummeted since the toxic oil began to spill into their waterways and both of Lucitante’s grandparents had fallen ill to stomach cancer within three years of each other.

“We’d like for the film to spark discussion on controversial energy issues,” Strickwerda said as she explained the message of her film. “As David’s mentor Manuel Pallares says in the film, ‘The stupidest way of using oil is burning it.’ But it’s going to take time to transition away from oil to sustainable sources of energy.”

The two women and their small crew had traveled to and from the Ecuadorian Amazon over the span of eight years to finish their film. After battles with the heat, the bugs and the impending doom that surrounded them the duration of the filming process, Strickwerda described the working conditions as challenging.

“It’s tough to find the resources and energy to keep going and see the project like this through to the end,” she said. “For most of the time, we were working other jobs, so it was always a juggle.”

Once the film finished its time on the screen, the lights illuminated the faces of concerned students. Many wanted to help, but didn’t know how, so Borman, the Cofan tribal chief, traveled to SF State to tell them how they can help and answer any questions they had.

He captured the audience’s attention by explaining the Cofan Survival Fund. The fund helps collect money from willing donors to make sure the people of the Cofan tribe are able to keep their land. It also helps the families work as park rangers around their community and manage one million acres of land that is maintained by the tribe.

“It’s not about a poor indigenous group out in the middle of the jungle that needs to preserve their culture, although that is a component,” Borman said. “It is about the survival of the globe and I don’t know how to get that across to people effectively. We need that million acres of rainforest as a human race to be able to survive climate change. We need a lot of those millions of acres, not just that one.”