Wrestler works to become All American 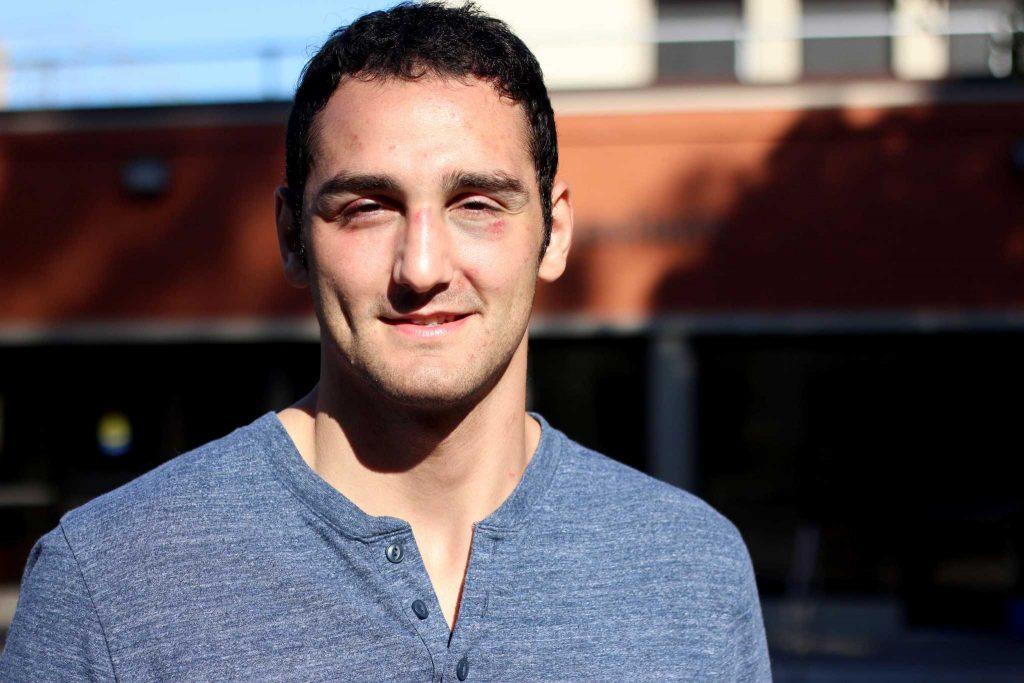 Andrew Reggi poses for a picture the morning after winning his match 8-1 against Cal Poly Pomona in San Francisco Sunday, Nov. 9, 2014.

Isolated, SF State wrestler Andrew Reggi stretched and waited patiently for his next match, while a song by rapper Drake rang through his headphones to block out the noise of the room. He concentrated on his first move on the mat, with victory on his mind, he said.

Reggi, a fifth year senior from Berkeley, Calif. returns after having a stellar junior performance, finishing 28-12 in the 197-pound weight class. Last season he was a Division-II National Qualifier and finished third at the NCAA Division II Super Region IV/RMAC Championships.

This season he is ranked eighth in the pre-season Division II wrestling rankings, but he’s hungry for more.

“I’m setting my goal a lot higher. I want to be a National champion,” Reggi said. “I was top 12 last year, but I feel I can do a lot better than that.”

Reggi is one of four returning seniors from last years team and is a leader to the other wrestlers. Gator assistant coach Isaiah Jimenez was a former teammate of Reggi’s and said his past disappointments are what fuel Reggi to make this his best season.

“He’s determined,” Jimenez said. “Last year he was three seconds away from being an all-american. He’s a quiet leader. Not very vocal, but he leads with the way he wrestles, the way he’s winning and (the way he) carries himself.”

It was not easy for Reggi to get where he is today. He has persevered through many roadblocks, mostly debilitating injuries. As a freshman, Reggi tore his anterior cruciate ligament and as a sophomore he suffered a herniated disk in his neck and redshirted his junior season.

“It was really difficult for me,” Reggi said. “The rehab process was six to nine months. Every single second I was on crutches (I was) so eager to get back on the mat. It’s hard to stay away from something that you love to do that much. It was the longest that I haven’t wrestled.”

Reggi credits the support of his family for keeping him focused on his goals, even through injury. His relationships with wrestling and his family are one in the same. Reggi’s uncle wrestled and so did his older brother Bryan Reggi.

“My family is everything to me. I love my family,” Reggi said. “They’re all like my best friends. My mom always has my back in everything I do. My brothers, my sisters, everybody’s behind me, they’re a really good support group. I wouldn’t be able to do anything without them.”

Bryan was Andrew’s first wrestling coach when he started at age 11 and the two have always been close — so close that they share the same birthday, but nine years apart.

“My brother is the main reason I started wrestling,” Reggi said. “He’s always motivated me. He’s always been in my corner. When I was younger he’d show me moves and, you know, just train me and he’s a really good motivator in my life.”

Bryan Reggi is proud of his younger brother and said that his brother can achieve his lofty goals.

“He’s very humble, he has good integrity,” Bryan said. “He’s worked so hard for it (and) he doesn’t waste time. Everything he does he does 100 percent. I don’t know how to explain it, he’s one of a kind.”

Reggi and his team are off to a hot start after they took down Cal Poly 24-9 Saturday. Reggi was the last Gator to wrestle and ended the night on a winning note, defeating Cal Poly’s JT Goodwin in an 8-2 decision.

The upset win over the team’s Division-I foe puts the Gators at 1-0 on the season. SF State looks to continue its momentum Nov. 16 at the Roadrunner Open in Fresno, Calif.