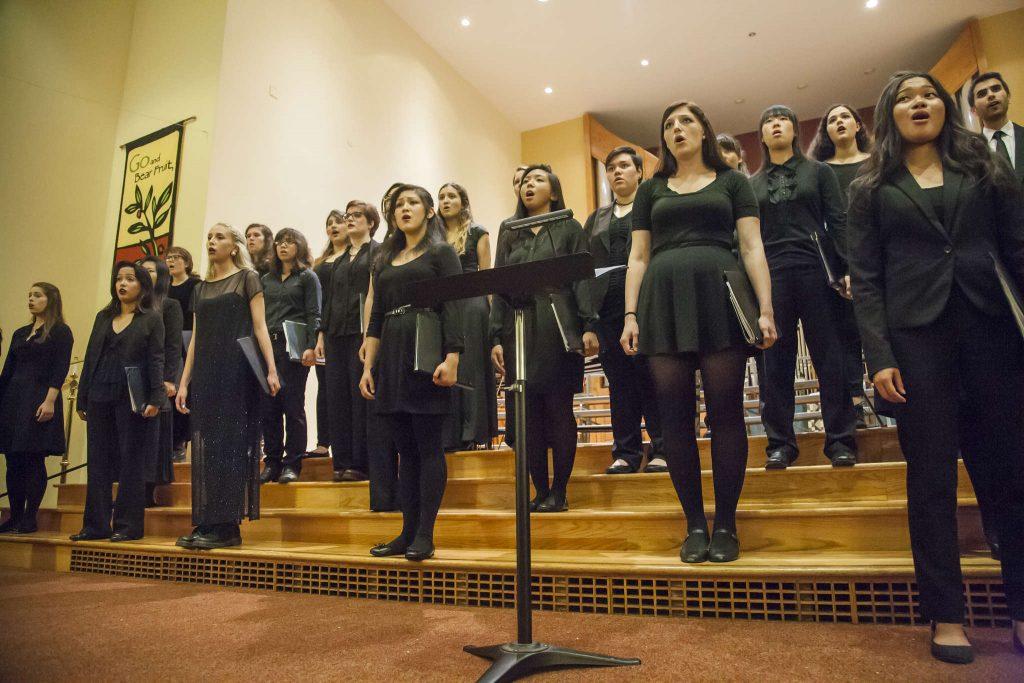 Amid winter colds and midterms, four SF State vocal groups have trained all semester for a harvest concert where they performed their skills for charity.

Penny Bloomenthal, a staff member at Lakeside Church, has overseen the annual concert before, and said the church feels privileged to have a lasting relationship with the school and does other charity work with the local Food Bank.

“We go down four times a year and work physically down in the food bank, packaging up food,” Bloomenthal said. “We also have events where we provide food for the food bank.

David Xiques has directed the SF State University Chorus for several years and assists with the Harvest Concert every year.

“This semester, the University Chorus is presenting some patriotic pieces, as well as other American pieces,” Xiques said. “We begin preparing for it in the beginning of the semester. After the first three days, we start our rehearsals right away.”

Rehearsals took up most of the time of his classes, where the students would stand, holding their sheet music binders, singing as close to perfection as they could reach.

“All four ensembles performed last week at Knuth Hall,” Xiques said, prior to the concert. “I can tell that they’re very into the spirit of the music, and they’re really performing it well. I’m very excited for them.”

Xiques added that performing for charity is a great part of the concert.

“In the past, we’ve had someone from the San Francisco Food Bank come and say a word,” he said. “They’re always very grateful. When we go in to drop the donations off we get the most wonderful thank-you’s.”

Xin Zhang is a graduate conducting student from China and the director of the women’s chorus. Zhang has been in the U.S. for just under two years, singing for seven years and a member of the choir for four years.

“This is the second time that I did the Harvest Concert, and the first time was last year, the first semester that I came to America,” Zhang said.

Zhang said she was nervous for the concert, but eager to raise money for the Food Bank and sing in front of an audience.

The vocal groups have been preparing for this performance and the upcoming concert in December throughout the semester. The groups picked a number songs to perform within the first few classes and began rehearsing the first week.

Vocal students arrived three hours early to help set up and rehearse in the church. Elegant and dressed in all black, with the men in suits, students spilled across the lawn and steps, as they laughed, talked and huddled in groups to perfect pieces.

Megan Maurer, a music composition major in the University Chorus, has been singing for 10 years and participated in the Harvest Concert for the third time.

“I’ve been doing this harvest concert since 2012 and we’ve raised a lot of money for the San Francisco Food Bank,” Maurer said.

Although Maurer has kept busy in school, she’s still enthusiastic about performing.

“I’m super excited,” Maurer said. “It’s really amazing to perform with a group of your peers who are also passionate about making beautiful music, not to mention raising money for a good cause.”