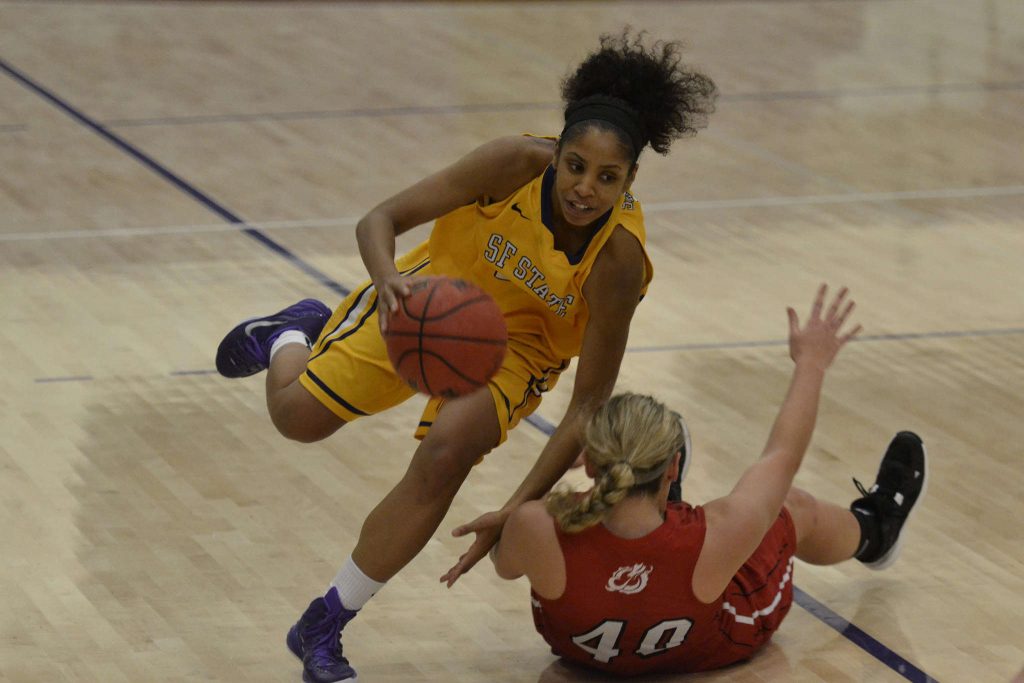 Minnesota State’s height advantage was apparent from the opening tip-off, as they dominated the rebound battle and forced the Gators to shoot long, contested three pointers throughout the game.

“When we’re smaller like we are, we’ve got to play bigger,” said head women’s basketball coach Dennis Cox. “We’ve got to fight harder, not literally fight, but really work hard in the post and pressuring passers, making passes into the post tougher, helping more on the backside.”

Minnesota State Moorhead went to halftime leading the Gators 42-32, and dominated the Gators on the boards by out rebounding them 25-11.

Although the team struggled to deal with a more physical Minnesota State Moorhead team, the Gators played better by exercising different options after halftime.

“In the second half we did a better job of attacking them,” Cox said. “We got to the free throw line quite a bit more, that was one adjustment that we made.

We were having trouble guarding them inside and guarding them off the dribble a little bit too so we made an adjustment to go to a zone and that ended up hurting us because one of their kids got really hot.”

That player was Dragons guard Meghan Roehrich, who put up a career-high 32 points on a Gator defense that is still trying to find its rhythm.

“It’s not really tough, I’m used to having to guard the best player, but tonight I didn’t do my job at that,” said senior guard Michelle Sutton, who guarded Roehrich for most of the evening.  “I just need to come out and work hard and be able to defend better.”

Sutton struggled against the Dragons star guard, but she managed to score a solid 17 points, along with one assist and one steal in 28 minutes.

The Dragons were easily able to score 32 points in paint behind Dragons forward/center Heather Strese, who had six points and 12 rebounds.

The Dragons imposed its size on the Gator forwards and took a 22 point lead over the Gators at one point, due to the inside scoring of forward/center Savanna Handevidt with 15 points.  But the Gators fought back in the second half to make it a closer game.

Despite the height disadvantage, the Gators found a way of scoring through playing a “run-n-gun,” style of offense by quickening the pace of the game.

“We’re trying to be up-tempo, that is what we want to be,” Cox said. “We want to be an up-tempo style pressure style team.  We know that we’re going to have to be that because we’re not going to beat people like teams we played tonight playing in a half court game. They’re just too big.”

The Gators offense got a boost from Leticia Galarza, who is in transitioning from guard to forward this season. Her passing ability was apparent as she she had a fancy assist from the free throw line to forward/center Taylor Ingraham in the first half.  Galaraza ended with 12 points, and four assists in 34 minutes.

The Gators headed up to Belmont, Calif. to face the Notre Dame de Namur Argonauts, but dropped another tough game 77-46. The team will look to shake off their rough 0-2 start as they head to Washington Nov. 25 to face the Western Washington University Vikings and the Seattle Pacific University Falcons during a three game road trip.