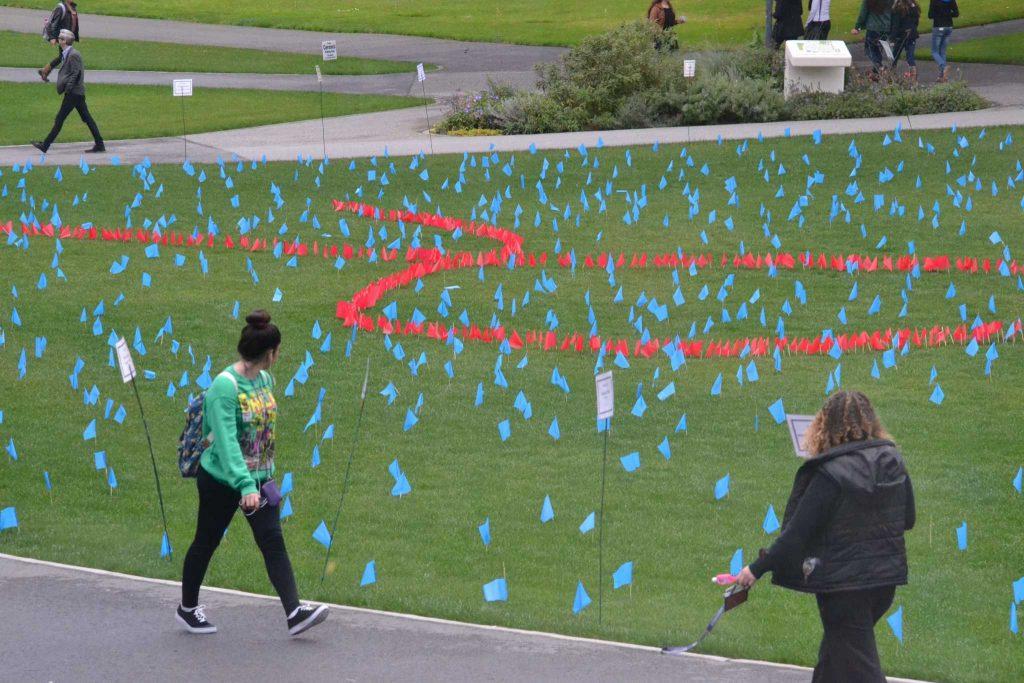 SF State honors staff and alumni that have passed away from AIDS on National AIDS day Monday, Dec. 1, 2014. Each flag represents a person who has passed, and around the perimeter are signs bearing some of their names. Helen Tinna/Xpress.

In observance of World AIDS Day, SF State student groups rolled out a series of events on campus Monday to commemorate the lives lost to the disease and educate students.

“The diagnosis of HIV or AIDS used to be a death sentence,” said Alexandre Santos of the Sexual Health PEACH. “Now it’s more of a ‘okay, we have an illness so what are we going to do?’”

According to amfAR, the Foundation for AIDS Research, approximately 1.2 million people in the United States live with HIV. It is estimated that of those living with the disease, one in five are unaware that they are infected.

“Getting tested is very important because HIV doesn’t always present symptoms,” said Sexual Health PEACH Jennifer Goranson. “You should always know the status of yourself and your partner before engaging in unprotected sex.”

For the most part, students tend not to think about contracting HIV or AIDS according to Goranson based on her experience.

“Most college students, more specifically if they’re in a heterosexual relationship, are worried about getting pregnant rather than STIs when the chances of getting an STI is much higher than the risk of getting pregnant,” she said.

This isn’t the case with Criminal Justice major Lanberto Palominos, who decided with his girlfriend to get tested before becoming sexually active.

“It’s vital because before you have sex with anyone that should be the number one thing on your mind,” Palominos said. “I know some people usually don’t do it because it takes time and they don’t want to wait.”

Activities kicked off at 10 a.m. Monday at many locations across campus, ending at 9 p.m. with poetry against AIDS. In addition, HIV/AIDS testing and workshops filled Monday’s schedule and with a reception to conclude the event at 5 p.m. Tuesday at the Richard Oakes Multicultural Center.

Those walking across campus were drawn in to the thousands of flags placed around the quad, commemorating individuals connected to SF State whose lives were taken by AIDS.

Palominos said that having the conversation about getting tested is crucial to any relationship. “The other person has a right to know if you have any diseases,” he said.