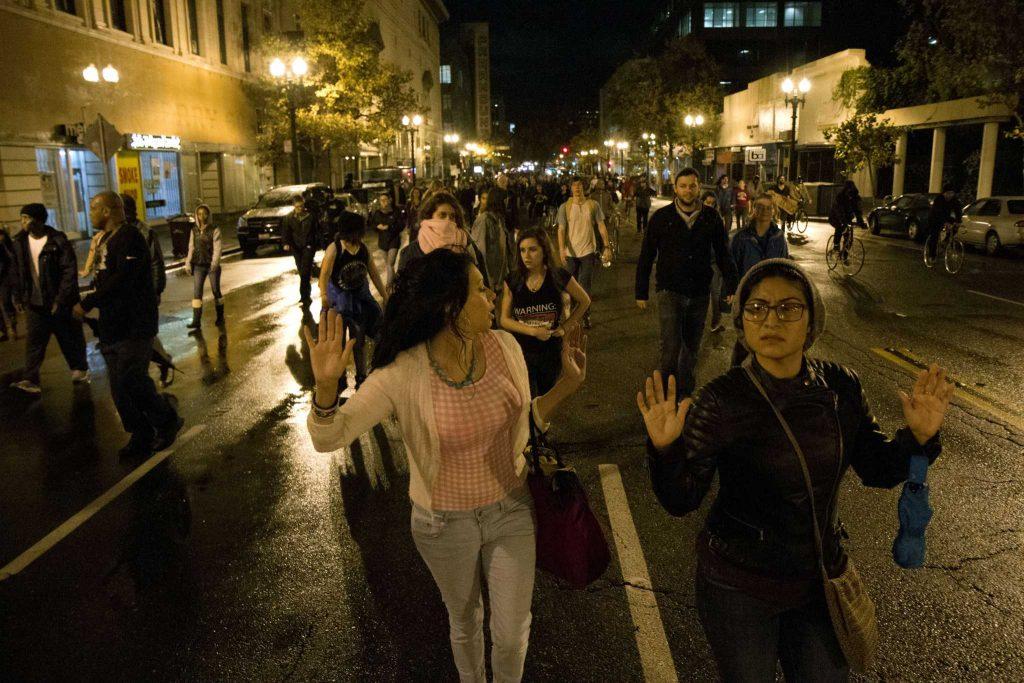 Protesters yell with their hands raised in the air, "Hands Up Don't Shoot!" Wednesday, Dec. 3 in Oakland, Cali. Downtown Oakland protesters speak out in response to the grand jury decision to not indict police officer name for the murder and killing of Eric Garner by a NYPD white police officer who choked Garner to death for allegedly selling single cigarettes. Amanda Peterson / Xpress

Hundreds of demonstrators joined an emergency march through Oakland Wednesday afternoon in protest of a grand jury decision to not indict a New York police officer involved in the death of an unarmed man.

Officer Daniel Pantaleo restrained Eric Garner, 43, in a fatal chokehold July 17, a tactic banned by New York Police Department in 1993, for allegedly selling cigarettes. A video captured by a bystander showed multiple officers tackle and handcuff Garner as he struggled to breathe.

SF State students joined protesters at 4 p.m. in Frank H. Ogawa Plaza and said they were weary of the increasing number of police brutality cases, particularly against people of color. The protest turned into a fast march around 5:20 p.m. on Broadway and continued through Oakland for several miles as protesters avoided police. The protesters remained peaceful despite the great number of people.

“I’m out here today to represent all the work my ancestors have done to get us here, where we are,” said Sharlana Turner, an SF State student and representative for Associated Students Inc. “To continue fighting for the justice and freedom of our people, to break the chains of oppression and keep pushing.”

Turner took the megaphone prior to the march on Wednesday and warned protesters that senseless violence wasn’t the answer.

“I’m out here standing for my people and to spread the love and unity,” Turner said. “We can do this peacefully. We just need to keep pushing, keep putting pressure on state people.”

The proximity to last week’s decision to not indict Darren Wilson stirred emotion in many of the protesters. Organizer Joey Johnson of Revolutionary Communist Party, USA said the level of police violence is intolerable.

“Yet another grand jury has exonerated yet another police officer for the murder of yet another black man, in this case Eric Garner,” Johnson said. “We’re out here, again, saying black lives matter.”

The march lost steam as the night continued due to weather conditions. Protesters plan to meet Thursday at Frank H. Ogawa Plaza at 5 p.m. for a second demonstration.