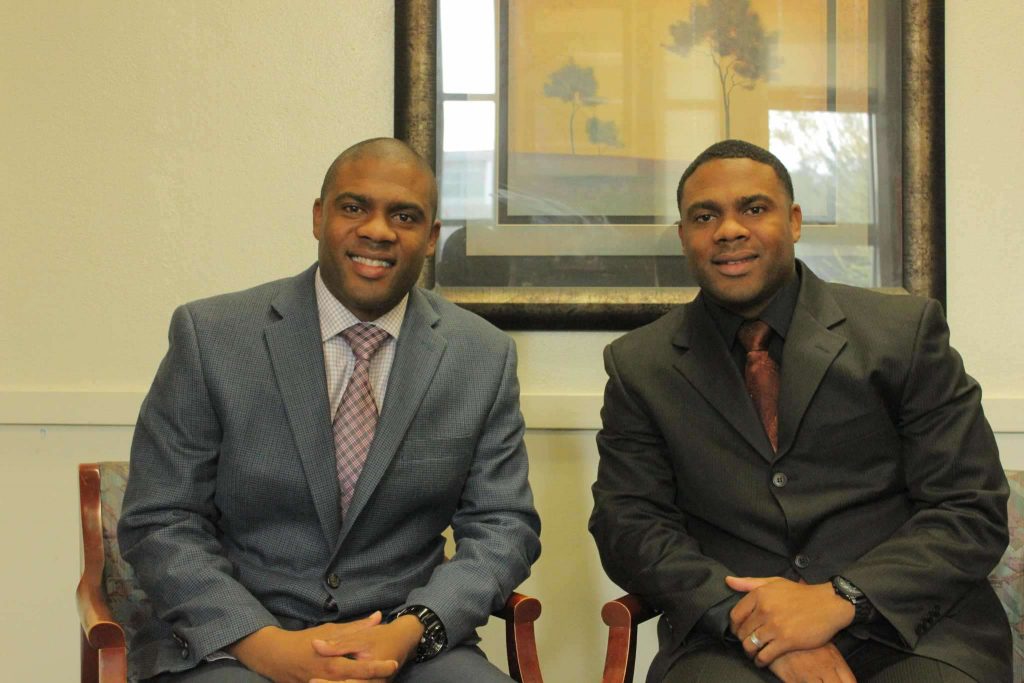 Twins, Ron, left, and Reggie Richardson sit for a portrait in Reggie's office at San Leandro High School, where they are co-principals Tuesday Nov. 18. Michael Duran/Xpress

At 9 years old, Ron and Reggie Richardson amazed passersby while dancing in sync to Michael Jackson’s music in their neighborhood streets. Today as adults, they have taken their connection further, into their new jobs as co-principals of a San Leandro high school.

“It’s not that we are brothers or twin brothers, it’s that we have a very similar mindset,” Ron said. “We are spiritually connected as twin brothers but as coworkers as well. We keep stability to a high school, which is important at the that level.”

Ron and Reggie were born and raised in Oakland and spent most of their childhood in the west side of the city where they attended Logan High School. They grew up in a single-parent household with their mother Jacqueline Richardson and older brother Russell.

After their mother faced housing discrimination, the family relocated to San Leandro. During the late hours that Jacqueline had to work, Russell was responsible for taking care of his younger brothers, and from that the three brothers developed a lasting bond.

“We were a close-knit family and we were like a nucleus,” said Jacqueline. “It was just us.”

As young teens, the twins played tricks on teachers and employers. Ron went to multiple interviews for Reggie and secured job offers the next day.  Despite fooling others, they could never get anything past their mother.

“They tried to pull tricks on me,” Jacqueline said. “I know you are Reggie and Ron. I’m your mother, I know who’s who.”

Ron and Reggie grew up doing almost everything together. Jacqueline dressed them in similar outfits when they were babies, but as they grew older, the decision to remain close was their own.

“They chose to be together,” Jacqueline said. “I really think it’s a twin thing. They are one.”

Ron and Reggie completed their undergraduate studies at SF State, where they were the co-captains of the men’s track team, and each of them graduated in 2000 with a degree in liberal arts. The twins finished their masters program together at University of California Berkeley in the Principal Leadership Institute, which focused on training aspiring principals and connected them to the local Bay Area districts.

The brothers started at Claremont in 2012 and left in May of this year to take on the co-principalship at San Leandro High. Ron and Reggie went through numerous panels with parents, students and community members before earning both positions at Claremont and San Leandro. With similar ideas, the twins seemed to be a good fit for the school.

Horizontal leadership, the idea that no one person is higher than another in terms of power or importance, was the main focus the twins aimed to bring to the school and the community.

“It all goes back to horizontal leadership,” Ron said. “Our students, parents and community members are leaders just as much as us.”

Ron and Reggie not only want to help prepare their students for college, but want to help them become better people, they said. According to assistant principal Irma Munoz, the twins create a sense of unity within the school.

“They are inspirational and courageous, they took risks,” said Munoz, one of the four assistant principals who works with the twins. “It is something magical.”

After spending their entire lives together, Ron and Reggie still believe that having a twin is priceless.

“Being a twin has honestly been a blessing,” Ron said.

After hearing his brother’s response, Reggie added, “Through thick and thin, family always has your back.”